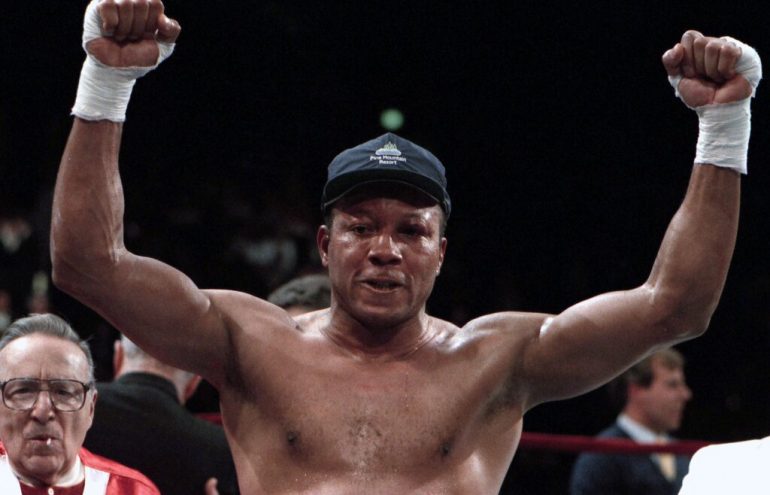 Photo from The Ring archive
08
Dec
by Anson Wainwright

Big-punching James “Bonecrusher” Smith was a late bloomer who regularly tested himself against the best of his generation and was an unlikely heavyweight titleholder in the mid-1980s.

Smith was born in the small town of Magnolia, North Carolina on April 3, 1953. He was the third born of six children to sharecrop farmers.

“It was a good place,” Smith told The Ring. “There was about a thousand people [who lived there], everybody knew each other, most people were family. We worked hard on the farm and went to church on Sundays. We respected people and people respected us.”

The mild-mannered youngster excelled in school and was good at sports.

Smith graduated from Shaw University in 1975 with a Bachelor of Arts degree in business administration. He then enrolled in the Army and it was during a three-year stint that the then 23-year-old first encountered boxing.

“One day I went to the gym to play basketball,” Smith recalled. “The boxing coach was there and said, ‘Hey Smith, why don’t you try for the boxing team?’ I said, ‘Nah, I don’t want to do that.’ He followed up with me, I tried out for the boxing team and I was pretty good. I just stuck with it.”

The young fighter left the services in 1978 and ventured to Philadelphia. It was during that time that he managed to spend invaluable time with former heavyweight champion Joe Frazier, who served as his mentor.

Smith, who went 35-4 in the unpaid ranks, turned professional at the advanced age of 27 in November 1981. However, his handlers made the curious choice of matching him with former amateur standout James Broad in his debut.

Smith was 14-1 when he traveled to London to face rising star Frank Bruno in May 1984. The visitor was given a boxing lesson through nine rounds but rallied to pull out an excellent knockout win in the 10th.

“I was surprised that he was more of a boxer because he’d knocked everybody out,” Smith said. “He moved around and stayed away from me. He probably would have won, but he came to me [late in the fight]. I was tired, he was tired, and I just hit him with some combinations and knocked him out in the last round.

“I understand that he was going to fight Larry [Holmes], but they took me for a tune-up and I tuned him up.” 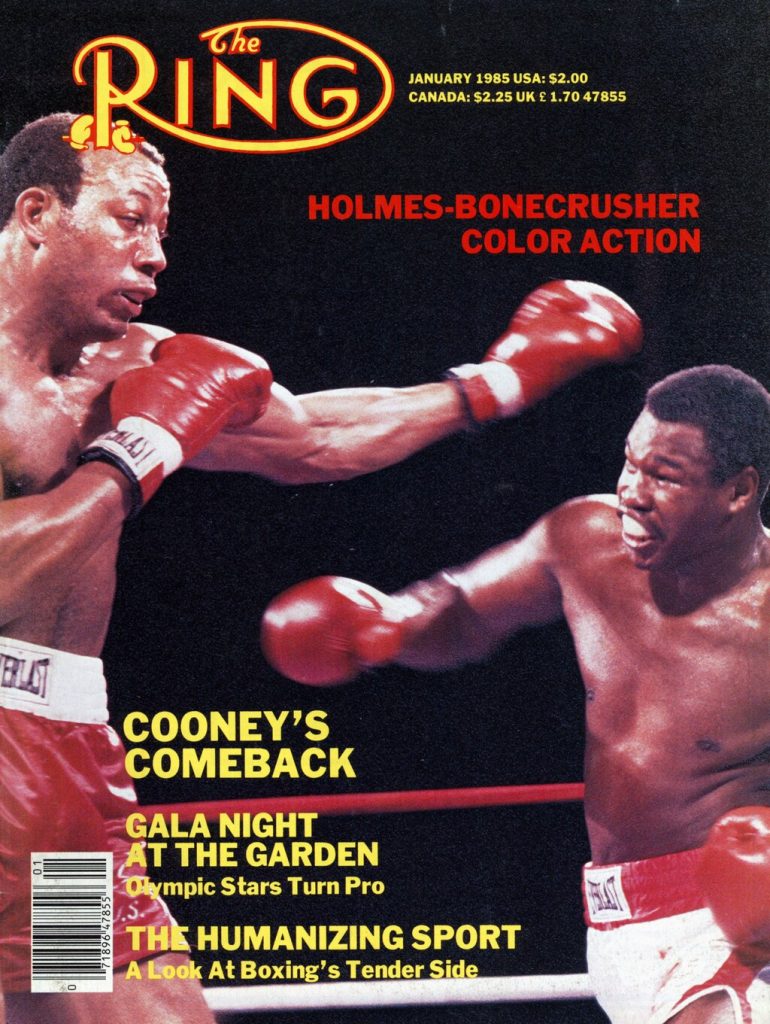 Instead, it was Smith who met the aforementioned Holmes for the IBF title in November 1984.

“Larry had been heavyweight world champion three years before I turned pro, he had a lot of experience,” acknowledged Smith. “I took him 12 rounds (before being stopped on cuts), it was a good learning experience.”

Smith became inconsistent, losing three out of his next four fights to Tony Tubbs (UD 10), Tim Witherspoon (UD 10) and Marvis Frazier (UD 10). However, those setbacks hardened his resolved and he turned things around to score solid wins over respected trio Mike Weaver (TKO 1), Jesse Ferguson (MD 10) and David Bey (UD 10).

But despite an improvement in form, Smith, 33, wondered if he would get another world title opportunity.

“I was suing Don King because he had promised me a world title fight,” he explained. “I was old, so I was tired of waiting. I got another promoter and King started suing me for breach of contract, so I started suing him.

“He called me up to settle the lawsuit and gave me seven days’ notice to fight a rematch with Tim Witherspoon. The very first punch I hit him with he was hurt. I just followed up and took him out with about 30 seconds left in the first round.”

This stunning win turned the heavyweight division upside down. Larry Merchant described Smith’s victory on the HBO telecast as, “a monumental upset.” 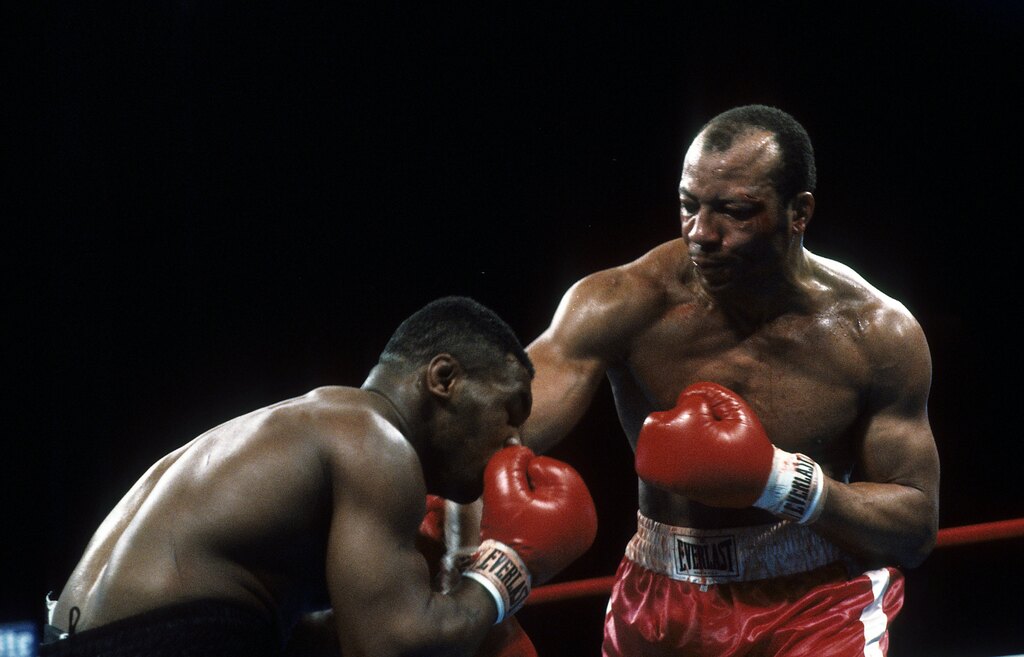 Smith and Tyson in 1987. Photo from The Ring archive

“I guess I got caught up in the hype,” admitted Smith. “I was bigger, stronger and smarter than Tyson. I could have beat him if I’d listened to my trainer. I backed up a little too much. He was able to slip punches and come back with combinations. He was real quick, strong inside, trying to rip his punches, he was really trying to hurt guys.

“Being older helped, I was able to handle it because I’d been around a little while. He was good, you can’t become heavyweight champion of the world without being good. He was a small heavyweight, and I think the media had him built up and he was riding on that media hype. He worked it and made a lot of money off it.”

Smith continued with his career but never fought for the heavyweight title again. He lost to an up-and-coming Razor Ruddock (KO 7), beat Weaver (UD 12) and dropped decisions to Greg Page and Michael Moorer before drifting from the upper echelons of the sport.

Now 67, Smith lives in Myrtle Beach, South Carolina with his fiancée Doreen. He has two daughters, a stepson and two grandchildren. He stays active doing a number of things.

“I do speeches, travel and do network marketing,” Smith said of his life today. “Right now, I represent a company called Total Life Changes.”

The ex-titleholder graciously took time to speak to The Ring about the best he faced in 10 key categories.

BEST JAB
Larry Holmes: He had a real good jab; it was hard and strong. He was tall, he was big and he was quick with that jab. He learned from Muhammad Ali – real good jab.

BEST DEFENSE
Mike Tyson: He was short. I was 6-foot-4 and he was 5-foot-10. He would duck, he was taught how to slip punches and duck. Bill Cayton had a library of fights, Mike learned from those videos and studied fighters.

BEST FOOTWORK
Greg Page: He had a style like Muhammad Ali; they were both movers, [Page] patterned [himself] after Ali. I remember in the first round, when we fought, he turned his back and came right back with a right hand and I went straight down. I got up and went 10 rounds, but he dropped me in the first round with a walkaway right hand.

SMARTEST
Holmes: Larry was champion for six or seven years, he learned from Muhammad Ali.

STRONGEST
Mike Weaver: They called him “Hercules”, but I stopped him in the first round. The guys I was fearful of, I jumped on them and tried to take them out quick. He was very strong, and I was leery of Weaver. I went 12 rounds with him [in the rematch]. Witherspoon was strong.

BEST CHIN
Tyson: I hit Tyson with good shots. You had to hit him to be around.

BEST PUNCHER
Tyson: He knew the anatomy and where to hit a person. He knew the soft spots, like solar plexus, he knew the pressure points of a body. The next day, I was sore and it hurt.

BEST BOXING SKILLS
Holmes: He had good head movement, he was just experienced. He fought a lot of top guys: Ken Norton, Ali.

BEST OVERALL
Holmes: He was smart and very knowledgeable about boxing. Several guys got him in trouble and he was able to come back and beat them.