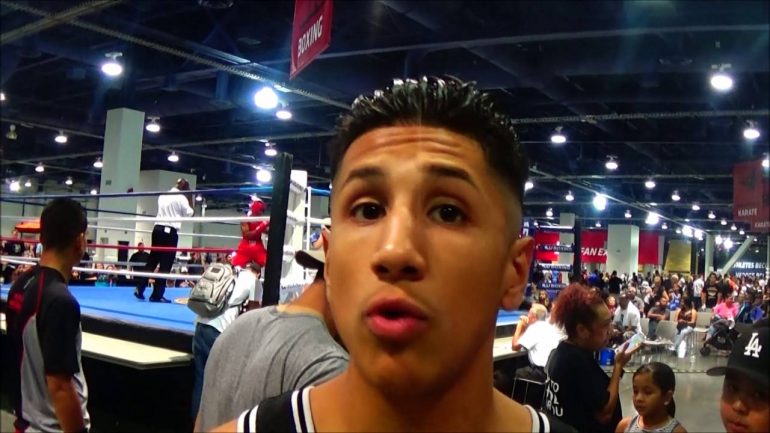 Fernando Vargas Jr., the son of the famed two-time junior middleweight titleholder, will make his pro debut on December 18, it was announced Monday afternoon.

Vargas will face Pablo Rosas in a four-round middleweight bout at the Grupo Sipse TV Studios in Merida, Mexico. ESPN Knockout will televise the fight live.

Vargas, who turned 24 last month, was born in Oxnard, California, where his father was also born and trained at the famed La Colonia Boxing Gym. After retiring from the sport in 2007, Vargas moved his family to Las Vegas, where he opened his gym, the Fernando Vargas Fighting Foundation.

Because of the success of his father, expectations may be high for Vargas Jr., which he acknowledges.

“I’m looking to follow in the footsteps of my father,” said Vargas, who began boxing at the age of 17. “He’s the one that gave me my start in boxing and I want to carry on the Vargas family legacy. I’m looking forward to fighting in Mexico, where our family heritage is from and my father has many fans. I plan to make my own fans there and put on an exciting show in my pro debut.”

“Junior has worked very hard and I’m looking forward to him turning professional,” said Vargas Sr., who turned pro four-and-half months after his son was born. “He has great experience sparring with top professional fighters and the time is right for him now. I look forward to seeing him in the ring and will guide him so that he can be the best he can be. It’s an honor this announcement [came] on my 43rd birthday.”

Vargas Sr. also has two other sons, Amado and Emiliano, who are accomplished amateur fighters.

“I’m happy we were able to put this fight together in Merida, Mexico, on ESPN Knockout,” said Loeffler. “Thanks to Mario Abraham and Max Boxing Promotions for giving Junior this opportunity. I’m looking forward to seeing him in the ring. He has great talent and his own marketability. There is a lot of anticipation for his pro debut. Now he has to show what he is made of and the fans are in for a treat to see the next generation of the Vargas family in the boxing ring.”

Rosas (2-1) last fought on October 12 of last year in his hometown of Merida, defeating Roman Delgado by unanimous decision. The 25-year-old also defeated Delgado in his pro debut almost eight months prior.

Francisco A. Salazar has written for The Ring since October of 2013 and has covered boxing in Southern California and abroad since 2000. Francisco also covers boxing for the Ventura County (California) Star newspaper. He can be reached by email at [email protected] or on Twitter at @FSalazarBoxing.