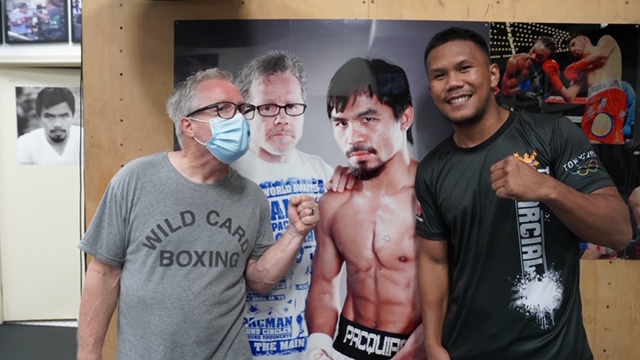 Eumir Marcial will be making a pit stop in the pros before competing in the 2021 Olympics.

The Filipino middleweight, who is signed with Manny Pacquiao’s MP Promotions and Premier Boxing Champions, will make his pro debut on December 16 against Andrew Whitfield (3-1, 2 knockouts) in a four-round bout. The fight will take place at the Microsoft Theater in Los Angeles, and will air live on FS1 (9 p.m. ET).

Marcial, 25, of Zamboanga City, Philippines has been training at the Wild Card Gym for nearly two months with Freddie Roach, the guru credited with help maximize the potential of his promoter, Pacquiao. A southpaw with two-fisted power, Marcial is the Philippines’ most accomplished amateur boxer in a generation, having won gold medals at the 2015, 2017 and 2019 Southeast Asian Games, as well as at the 2011 AIBA Youth World Boxing Championships.

Marcial elevated himself to another level in 2019 when he earned silver at the 2019 AIBA World Championships in Russia, dominating the field through the semifinals before losing to a boxer from the host nation, becoming the first Filipino male since Harry Tañamor in 2007 to earn a silver at the Worlds. Marcial followed that up by earning the gold at the Asia-Oceania Olympic qualifiers to book a ticket to the Tokyo Games, which were ultimately postponed to 2021 due to the pandemic.

“Turning professional is an important step in my journey to the 2021 Olympics in Tokyo. A lot of the fighters I may face in the Olympics have already turned pro so my professional training with Freddie will keep me at their level of experience when we battle in the Olympics,” Marcial said.

“But my ultimate goal has always been to make my Dad’s dream a reality, a dream he has had since my first amateur fight, to win an Olympic gold medal. That is the prize I have in my eyes. I want to be the first to bring Olympic gold back to Philippines.”

Freddie Roach tells The Ring that Marcial is “really, really heavy handed, he punches hard, he’s very quick with his hands,” and that he expects him to grow into the 168-pound division eventually.