International Boxing Hall of Fame, against the ropes due to Covid-19, appeals to fans for help 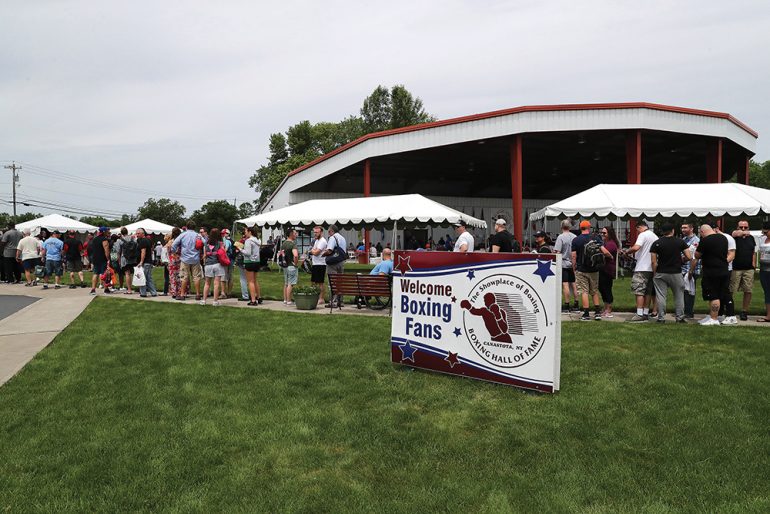 Fans line up at the International Boxing Hall of Fame for the Weekend of Champions induction events on June 9, 2018 in Canastota, New York. Photo by Alex Menendez/Getty Images
07
Dec
by Ryan Songalia

The International Boxing Hall of Fame, located in Canastota, N.Y., is both in the middle of nowhere, and in between everywhere. People driving from Massachusetts to Ohio, or from Toronto to New York City, or those getting in their cars to drive to Niagara Falls, or looking for an extra stop on the way to the Baseball Hall, would take exit 34 off of Interstate 90, just outside of Syracuse, to touch the ring canvas where Muhammad Ali and Joe Frazier fought the “Fight of the Century” in 1971, or admire fist castings and championship belts of world champions of years past.

But, with the Covid-19 pandemic bringing a halt to much of travel across the country, those trips aren’t being made. As a result, the IBHOF’s visitor traffic is down 75-80 percent for the year, says the Hall’s Executive Director Ed Brophy. In a letter of appeal issued in September, Brophy called it “the most challenging time in the 31-year history of the Hall of Fame.

“We will be concluding 2020 soft, of course,” Brophy tells The Ring. Among the challenges include having its doors closed from March until June 29, after New York State allowed museums in certain regions to reopen. To spark visitor traffic, the Hall lowered its general admission fee from $13.50 to the youth rate of $8.50, but the Hall is still estimated to take in somewhere between $150,000 and $200,000 less than expected this year.

To make up the budget losses, the Hall has issued appeal letters for donations and held auctions, while remaining open to new suggestions for events to generate revenue. Brophy says he hopes to cut the deficit to under $100,000 by the end of the year, but appeal letters and auctions alone won’t accomplish that.

This past June, the Hall also had to cancel induction weekend, meaning legends like Bernard Hopkins and Christy Martin would have to wait until 2021, when the two classes will be combined, to be honored in Canastota. For a small village with a population under 5,000, the absence of boxing’s biggest stars coming to town was felt.

“It was weird for all of us,” said Rosanne Warner, Mayor of Canastota, who says the whole town, from the town clerk to members of the village board and the clergy pitch in to help during induction weekend. “There was a lot of depression that went around the community. A lot of people look forward to that, including the business owners who are used to having a little extra business that week.”

While induction weekend is expensive to put together, it’s also the Hall’s busiest time of year, and an important fundraising opportunity. The weekend attracts corporate sponsors which can hold them over during lean times, and creates “spinoffs” which Brophy says includes fans becoming members, which leads to a spike in donations. 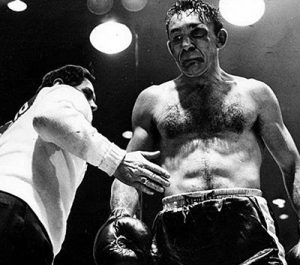 Carmen Basilio, between rounds of his fight-of-the-year rematch with Sugar Ray Robinson, is the epitome of the blood-and-guts warrior.

To understand what the Hall means to Canastota, and to boxing, it’s important to look back at how it first started. The village is best remembered as the hometown of Carmen Basilio, the tough-as-nails welterweight and middleweight champion of the ‘50s whose rugged determination carried him to wins over Sugar Ray Robinson, Tony DeMarco and Ike Williams.

Seeking a way to celebrate their native son – plus his nephew Billy Backus, who scored a technical knockout of Jose Napoles in 1970 to win the undisputed welterweight championship – community organizers came together in February of 1984 to start strategizing.

“Boxing didn’t have a hall of fame similar to baseball, football, basketball to go with your family and see the artifacts where the champions of their sport are being honored,” remembers Brophy. “We were fortunate that our village and town board were very supportive and the mayor gave us an office space and we had a desk and a phone and off we went.”

The founders were able to secure a loan, raise money, establish a not-for-profit organization, and then, in 1989, finally open its doors. Former heavyweight champions Joe Frazier and Floyd Patterson were among those on hand to cut the ribbon, and then, a year later, Ali, former light heavyweight champion Archie Moore and former featherweight champ Willie Pep were among those in inducted in a massive inaugural class.

“I think as the years have gone by there’s a sense of the Hall of Fame being more of an institution because it’s something that generations have grown up in,” said Brophy. “It’s overlapped generations. Some younger fans don’t know there wasn’t a Hall of Fame before this.”

Proof of that can be found in Aris Pina, who is among the voters who decide who goes into the Hall each year. Pina, a native of New Bedford, Mass. who now resides in Astoria, Queens, was 15 years old the first time his father, Frank, finally relented to his requests to go to Canastota in 2000.

What Pina appreciates about the Hall is how it gives lesser known champions, who have often been forgotten through the passage of time, a chance to reconnect with the fans who appreciated them the most. He adds that, what separates the International Boxing Hall of Fame from other halls is the access granted to its fans.

“You have an opportunity to just chit chat with these guys whereas you wouldn’t have that anywhere else. Do you think you’d have a chance to sit down with Dan Marino and talk about his best games?,” said Pina.

One of the places where fans got to mingle with the fighters is Graziano’s, an Italian restaurant founded over 70 years ago by Tony Graziano, who managed Basilio and Backus in their fighting days. The restaurant was purchased by the Oneida Nation in 2018, but has remained closed during the pandemic due to the advanced age of Tony Graziano, who remains involved with the restaurant.

Mayor Warner, who had once worked at Graziano’s for a few years, says that the return of the induction weekend ceremonies, planned for June 10-13, 2021, will be a boost to the community.

“I think it will be a huge morale booster for everybody,” said Warner. “It will bring back some normalcy to the community. We’re all so used to seeing it.” 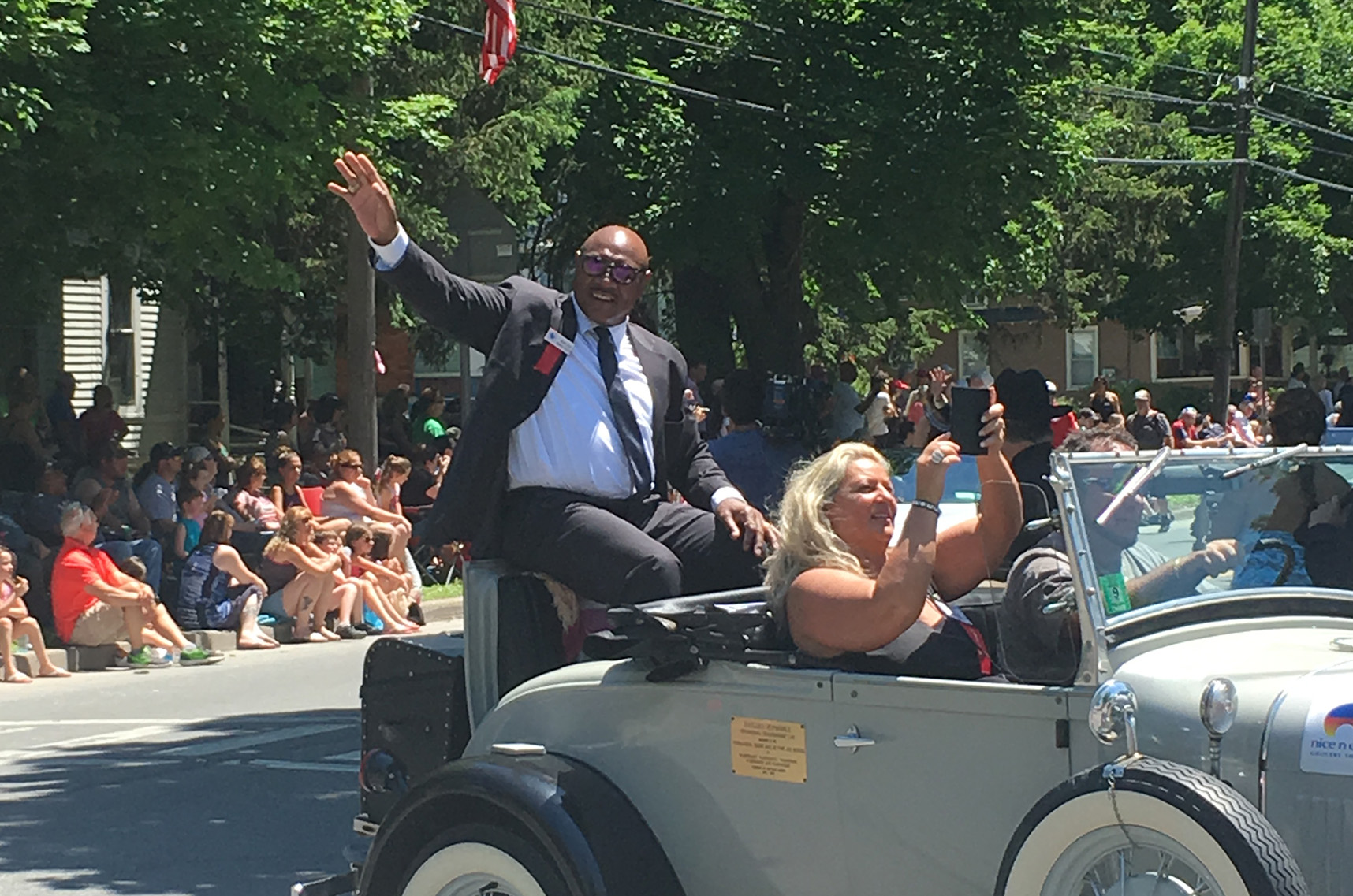 Marvin Hagler at the IBHOF Parade in 2017. Photo by Mike Coppinger

How fast the Hall, and the overall economy, rebounds is contingent upon how the world recovers from the pandemic. News of effective vaccines has fostered optimism, but getting to a working percentage of immunity, and then getting people comfortable with traveling and spending again, will be key.

“We believe it’s gonna be soft in the beginning and we don’t know where it’s gonna pick up,” said Brophy of 2021. “At the end of the year it will be a softer year again but hopefully not as soft as this year. But it doesn’t look too promising as of right now that 2021 will be any booming year or back to normalcy, at least in the first half, and the second half is questionable.”

Still, Brophy says he is confident that the Hall will be able to hang on through the end of the pandemic, even if it takes some time to get back to its usual prosperity.

“We believe we’re gonna make that turn, normalcy will probably be in 2022 but maybe there will be a glimpse of it in 2021 and we hope it’s sooner than later. But the Hall of Fame feels it’s on a foundation that will carry us there.”