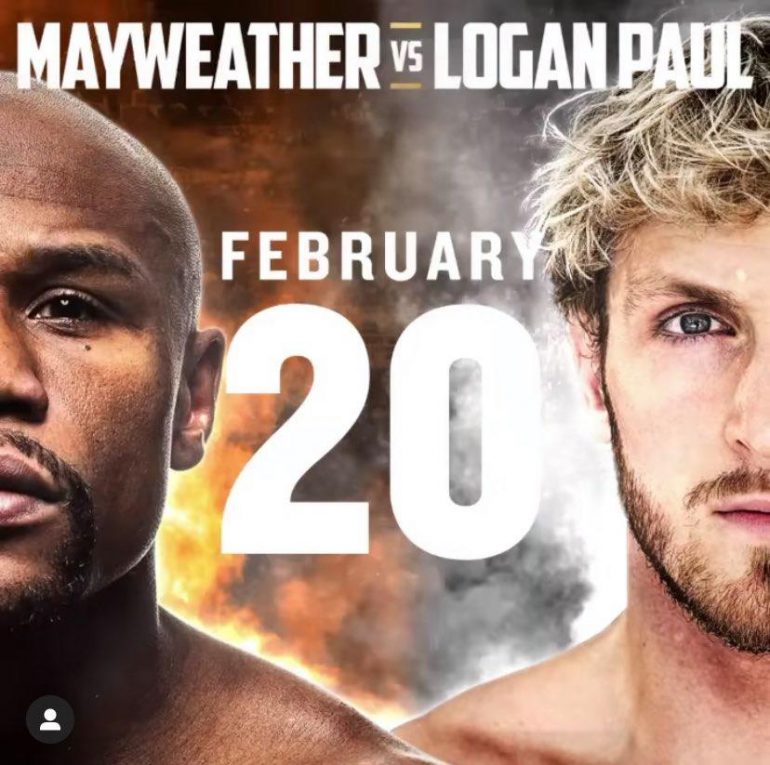 Just when you thought the exhibitions were over.

Floyd Mayweather Jr., the five division world champion announced on Instagram Sunday afternoon that he will meet YouTuber turned boxer Logan Paul in an exhibition bout on February 20. No venue or location was named, though the post revealed that the exhibition will be available on the streaming platform Fanmio.

Mayweather (50-0, 27 knockouts), who turns 44 four days after the bout, has been retired from pro boxing since stopping Ultimate Fighting Championship star Conor McGregor in 2017. But Mayweather has since been in the ring again on New Year’s Eve of 2018, knocking out a much smaller kickboxer named Tenshin Nasukawa in Japan.

“This is going to be a great night for the fans worldwide as we are bringing something special to them through sports and entertainment,” said Mayweather in a press release. “I have never shied away from doing things differently throughout my career and fighting Logan Paul in this special exhibition is just another opportunity for me to do it again.”

Logan Paul, 25, is 0-1 as a pro boxer, having lost his debut to fellow YouTube star Olajide William Olatunji in November of 2019.

“I am always searching for the ultimate challenge and it is a dream to go toe-to-toe with the greatest boxer alive,” said Paul, who, despite this not being an official fight, said could be “the greatest upset in the history of sports.”

Though Paul, and his younger brother Jake, have drawn the ire of boxing traditionalists for their excessive promotion of inconsequential bouts, there’s no denying their popularity, particularly among teenagers and young adults. Logan Paul’s 2018 amateur bout against Olatunji sold a reported 1.3 million pay-per-views, a figure that dwarfs most numbers generated by boxing champions.

The news isn’t a total surprise: Mayweather recently spoke about fighting Paul, comparing him to another crossover star, Conor McGregor. “Three years ago a fighter from the UFC said my name and I had to put a muzzle on that bitch. Logan Paul can get the same treatment before I go conquer Japan again,” said Mayweather.

As expected, reaction to the news has been mixed in the combat sports community. While some were understanding of one of the sport’s greatest competitors taking an easy payday, UFC President Dana White, speaking on the “Nelk Boys” podcast, said the news was indicative of a decline in the sport.

“When people ask me, ‘What’s the state of boxing right now?’ That’s where it’s at,” White said. “Didn’t that kid get beat up by the (expletive) video game kid from England, and now he’s going to fight Floyd Mayweather?”

“When people ask me, ‘What’s the state of boxing right now?’ That’s where it’s at,” White said. “Didn’t that kid get beat up by the fucking video game kid from England [KSI], and now he’s going to fight Floyd Mayweather?”

One issue that still needs to be resolved is the weight. Paul, who stands at 6’2″, weighed 199 pounds for his pro debut, while Mayweather has never weighed more than 151 pounds for a fight.

Mayweather is expected to be one of the inductees to the International Boxing Hall of Fame class of 2021, which will be announced on December 15.