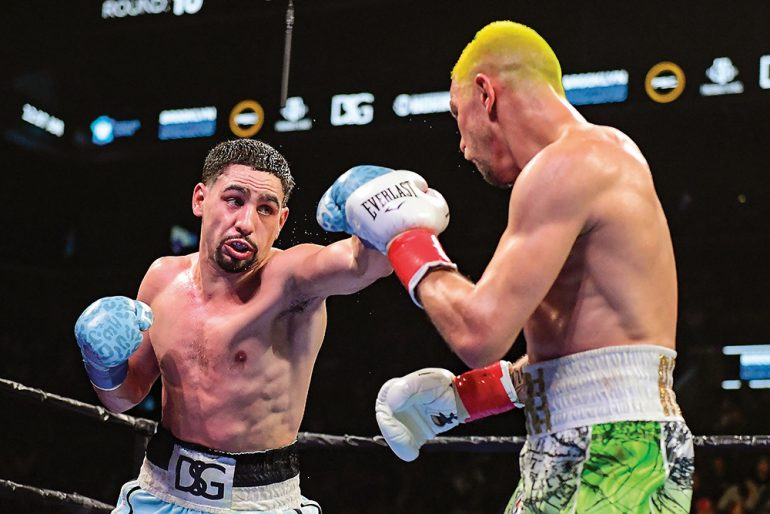 Danny Garcia, a former welterweight world titleholder and the former Ring junior welterweight champion, finds himself once again in familiar territory as the underdog heading into a very significant fight.

Garcia, who is going to his opponent’s home region, will challenge unified welterweight world titlist Errol Spence Jr. on Saturday (Fox PPV, 9 p.m. ET, $74.99) at AT&T Stadium – home of the Dallas Cowboys – in Arlington, Texas, in a fight where most expect Spence to be victorious.

It’s a position that Garcia has been in before and one he has learned to embrace.

“I don’t pay no mind to that,” Garcia said of his position as the ‘dog. “I’ve been the underdog in many fights. I just prepare myself and worry about Danny Garcia training hard. I don’t worry about the critics, the media or what they say about me. I know I’m a great champion, a great fighter and that’s why I’m here today. That’s what I’m gonna prove Saturday night – that I’m a great champion.”

Angel Garcia, Danny’s outspoken father and trainer, said his son being an underdog goes all the way back to his amateur days when time and again he proved people wrong, just as he has done during a 13-year professional career.

“Even as an amateur, Danny never got credit. Ever. I don’t know why,” Angel Garcia said. “I guess there’s just something spiritual. God wants people to look at him that way. I’m being honest. Danny never gets credit but at the end of the day Danny is a great fighter. He can really fight. People underestimate him and on (Saturday) he’s going to upset the world again.

“When he was a young kid I used to take him to amateur shows and they looked at him like he was the white boy. I’d say, ‘You’re gonna fight this white boy,’ and after they’d say, ‘Oh, sh–, that white boy can fight.’ That’s OK. It doesn’t matter what the people think. You can’t stop what they say. It’s a free world.” 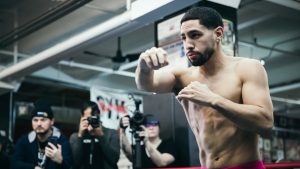 Perhaps Garcia has been overlooked at times because he is not the most physically imposing man, has somewhat of a baby face and does not do much trash talking, leaving that instead to his dad.

“He says he’s immune to (being the underdog),” said Angel Garcia, who predicted his son would knock out Spence in the seventh round. “So, the pressure is not on him. The pressure is on Spence. Not that I’m saying Danny wants it to be like that but if that’s what the people think there’s nothing you can do. Just go along with the flow. He’s so immune to it, people coming at him saying that he ain’t got a chance and all that. So he just goes with the flow and keeps it rolling. It motivates him.”

When Danny Garcia turned pro in 2007, with Golden Boy Promotions, he was brought along slowly and steadily, but each time the company stepped up his competition he passed the test. He was matched with tough veterans such as Ashley Theophane, Mike Arnaoutis and former world titleholders Nate Campbell and Kendall Holt before he got his first shot at a 140-pound world title against Hall of Famer Erik Morales, albeit a Morales who was at the end of his career.

Garcia dropped him in the 11th round and won a clear cut decision before going into his first defense, a title unification bout with Amir Khan, who was the favorite.

After getting cut and struggling early against Khan, Garcia finished him in the fourth round for a big-time upset victory.

Garcia gave Morales a contractually obligated rematch next and sent him into retirement via massive fourth-round knockout and then outpointed former titlist Zab Judah before he was once again the underdog, this time an even bigger one against power-puncher Lucas Matthysse in 2013.

Matthysse was terrorizing the division and destroying everyone in his path and Garcia was given little chance. But he believed in himself and rose to the occasion. Garcia became the first man to knock Matthysse down and won an impressive unanimous decision to retain his alphabet belts and win the Ring championship.

“For me Khan was big because of his name,” Angel Garcia said. “But Matthysse was bigger because they had him as the boogeyman, like he was going to destroy Danny, the same way like they have Spence. They have him as a boogeyman. But we’ve seen guys like him before. It’s not nothing new. Look at his resume. The only big name he’s fought was probably (Shawn) Porter. Kell Brook was already beat up by (Gennadiy Golovkin). Mikey (Garcia) was too little for him. Mikey was just trying to survive.

“He’s only the underdog because Spence is undefeated, but that doesn’t mean anything when we get in the ring. What really matters is that once Danny lands his shots, will Spence be able to handle it? I’m not worried about anything else that’s being said on the outside. If Danny throws a straight right and hits him flush, Spence isn’t getting up. Spence hasn’t really been hit yet. I respect every fighter, but Spence has only really fought three guys that people know (Porter, Garcia and Brook). Just look at all the fighters Danny has fought. That resume matters.”

Garcia, whose only losses were in welterweight title fights to Keith Thurman by split decision and to Porter by close unanimous decision, said his assignment against Spence does remind him of the pre-fight vibe against Matthysse.

“The only thing is I’m not the champion, but when I fought Matthysse I was the underdog. Everyone was doubting me and I knew I could beat him but no one saw my vision,” said Danny Garcia, who is going into his 10th world title bout. “I compare this fight to that fight because I already know how the media is going to react. I know I’m the underdog to the media. But I know I’m the better fighter. (Spence is) just another name that I’m fighting.

“I’ve been the underdog my whole career. I’m in my comfort zone being an underdog and it’s the energy I like to have. I just have to keep proving myself again and again. That’s what keeps me going.”

The stage isn't too big for @DannySwift! He knows what is at stake in #SpenceGarcia, but he's not unfamiliar with fighting in these situations pic.twitter.com/5DwB8BcSuT

Spence has been one of boxing’s pound-for-pound best for the past few years and is making his fifth defense and fighting for the first time since he dropped Porter in the 11th round, outfought him and won a split decision to unify two belts 15 months ago.

But much has happened to Spence since. Three weeks after beating Porter, in the early morning hours of Oct. 10, 2019, Spence was in a horrendous high-speed, one-car crash in Dallas, for which he was charged with DUI. In the crash, which was caught on surveillance video, Spence flipped his white Ferrari multiple times and he was thrown from the car. Although Spence suffered no broken bones or major injuries, his face was terribly bruised and swollen, he had several teeth knocked out and dealt with neck and hip pain while spending time in the hospital and acknowledging that he was lucky to be alive.

To his credit, Spence didn’t want to return in a tune-up fight and elected to face the dangerous Garcia, whom he was supposed to fight on Jan. 25 before the accident erased that date.

But Garcia (36-2, 21 KOs), 32, of Philadelphia, said as long as Spence (26-0, 21 KOs), 30, a southpaw from Desoto, Texas, is stepping into the ring he can only assume he will be at his best and doesn’t want to hear about the car accident as an excuse after what he believes will be Spence’s first defeat.

“I feel like if he wasn’t ready then he wouldn’t do it,” Garcia said. “Maybe the accident was bad and he’s facing a lot of mental things but he’s unified champion. There’s a lot of pressure on him but I’ve been in his shoes before. The pressure is on him. It’s not on me. I’m just gonna go in there and do what I do. The rest is up to him.

“A lot of people say this fight is good timing but I’ve always thought this was a good matchup for and that’s why I wanted to fight him. I want to be unified champion again. In order to be the best and be considered a legend you have to fight the best.”

And, in this case, score another upset.