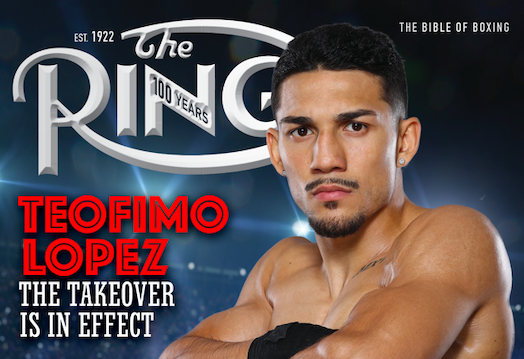 “Hey Woods, how ya doin,” he asked, because he was brought up well.

“This is my new answer to people, when I’m asked how I’m doing, Teofimo. ‘I been worse.’ Yeah, I’ve definitely been worse, man,” I told via telephone the 23 year old fully-certified young gun, who had just finished walking his dog, in his home-base state, of Arkansas.

Now, you could argue that idle chit-chat is really neither here not there, but I’d counter it does. Because it signifies somewhat the depth of the kid, and speaks to his character. Lemme finish….

Rather than simply launching into it, talking about what fight might be next, stirring that pot by busting on the latest silliness coming from Devin Haney, or whoever, we talked about reality.

No, that doesn’t mean who and when Teofimo fights next isn’t reality. But walking the dog, picking up the poop, that’s regular reality, that even unified champions have to deal with it, believe it or not.

Whether they believe it or not, because it can take a long time, months, years, decades even..

…to understand that the fortune amassed and the fame enjoyed and all that notoriety doesn’t give you immunity from having to walk the dog and picking up the shit…or having your wife irked at you for saying you’d take out the trash, but you forgot. Winning belts and getting sweet checks, for sure, it can insulate you from a lot, but yeah, some new problems will pop up, and someone still needs to walk the dog. Some guys learn it, then forget it, because it’s hard when people are blowing smoke up your ass 24-7, enabling you, cozying up to you because they want some trickle-down money. Yes, Mike Tyson still does battle with keeping his ego right-sized.

I think the kid Lopez gets that. That getting the belts and the checks and adoration doesn’t render one immortal or above reproach… and the reason I mention it now and again is because I’m corny, and I want boxing stars that can help lift up the sport, and can be looked up to by kids, and asked for autographs and be ass kickers inside that ring and decent souls outside. That’s a bit corny, yes? Or maybe my suggesting it’s corny is an indication of how far we’ve drifted, because why shouldn’t this sort of sports entertainer, Teofimo Lopez, be someone who little kids in Sunset Park, Brooklyn, where he spent his earliest days, learn about him and want to follow in his footsteps, if they aren’t so enamored of schooling? Why shouldn’t popular boxers be role models? 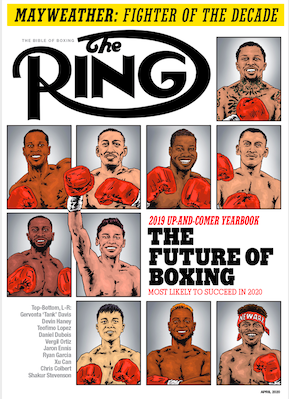 These days, Lopez is getting the new lay of the land. He’s getting to know more neighbors in Arkansas, where he moved  in April.  Goodness, you think that accent sticks out some and has people not knowing that the champ is there scratching their chin hairs? Him and the missus are in Jonesboro, sticking around for the time being, he’s not going to say forever, and they are building a house from scratch as a commitment to the region for now.

He is thinking, when COVID lifts, probably, he will make it back to BK, and hit some of the old stomping grounds, the restuarants, parks, the nooks, and soak it up as the Champ.

“And whenever I have the opportunity to make fights happen, it will always be Madison Square Garden in the running. When? That depends on the outcome of my first fight in 2021, if I come out of that injury free, then next one at MSG looks like a possibility, as long as we’re able to have fans,” Teofimo said.

He didn’t say who, against what foe, but lemme riff a little, dream a little dream. What about Teofimo, against Ryan Garcia, in Madison Square Garden, maybe July or August, 2021? That one stirs the imagination, yes?

“No matter what, I’m gonna fight next year at the Garden,” he told me.

I started drifting some, when he said that, to next year, and a changed planet. In a good way…Thinking of COVID being tamed, and maybe our leaders in DC stopping the constant juvenile toxicity, and a span of time where the temperature is just dialed down, and people can chill and smile and laugh more.

“Maybe next year could be real nice? Hey, you can’t believe everything you hear,” Lopez continued, as we talked about the positives and negatives in taking in ‘news,’ be it from print, radio, TV, etc. “I listen to some information (news),” Teofimo said, but like so many twentysomethings, he’s not that enthused with how opinion and bias and advocacy has crept into and taken over on “news” platforms.

We talked more current events, like how that Mike Tyson PPV did. (NYFights.com was the first to report that the event did over 1 million buys.)

“1.2-1.5 million, wow, that says those are icons, Mike and Roy Jones. Tyson is an icon, those are GOATS. Sheeeet, Tyson is an icon, he can come back at anytime and still make big numbers. Those guys hitting those numbers, that speaks for itself,” Lopez said.

Yes, he’s shot the breeze, lightly, with Tyson a couple times, but, he said, next time he’d be up for having a longer interaction. “Next time we talk, it’ll be different,” he told me. “Talk more serious.”

Because it IS different. Have you seen it? Kid is on the cover of RING.

Yep, that means something to him, very, very much.

That doesn’t surprise me, he admits to, unabashedly, being a throwback type. Plenty of, maybe most folks his age, can’t and don’t get it, getting on the cover of a periodical, like a RING, used to more so be a massive deal.

Doug Fischer has restored that mag to a place of prominence, and made getting the cover more of an honor than it had been, so he is due more than some credit.

I asked Teofimo when he learned that he’d be on the cover of RING.

I actually reached out to the editor in chief of the magazine, Fischer, to ask him about this Teofimo cover. I will admit to you, I’m ignorant about how the process works, at RING, how cover subjects are chosen.

“The lightweight showdown between unified champion Vasiliy Lomachenko and IBF titleholder Teofimo Lopez was one of the biggest boxing events scheduled in 2020, second only to the Fury-Wilder rematch, and undoubtedly the most significant matchup of the year,” Fischer told me.

“It was a no brainer for the winner of that ESPN-televised October 17 main event to be on the cover of Ring Magazine. Would it be the three-division titleholder, a top-three pound-for-pound player, and reigning Ring Magazine 135-pound champion who some believe is already worthy of the hall of fame? Or would it be The Ring’s 2018 Prospect of the Year and No. 1-rated lightweight? It was the underdog, the young gun, who imposed his will and skill on the two-time Olympic gold medalist and amateur legend. In beating Lomachenko and unifying major belts in his 16th pro bout, Lopez did what only mature former European former amateur standouts — such as Aleksandr Usyk, Artur Beterbiev and Josh Taylor — or Japanese phenoms like Naoyoa Inoue have achieved in recent years. Lopez is the only American boxer making boss moves like that. And at 23, he’s the youngest fighter in The Ring’s pound-for-pound top 10 (debuting at No. 6). If Lopez ain’t cover worthy, I don’t know who is.”

Now, Teofimo doesn’t have a physical copy yet, but he will soon enough.

“I’m gonna grab one this weekend, when I do a photo shoot, for RING. It’s on the East Coast, in Pennsylvania. Because you know what’s coming…Fighter of the Year!”

And, should anyone else be considered for that honor?

“The only other one is my great friend, Tyson Fury,” Lopez answered. “Getting the cover of RING, it’s surreal, me and the wifey are gonna celebrate, with some wine, it’s another accomplishment of this year.”

Let me go out on a limb here to finish up, double fisted. One, I think this kid will have a one or two more years better than this one, from a boxing perspective. And there will be one or two, maybe more, RING covers for Teofimo Lopez.