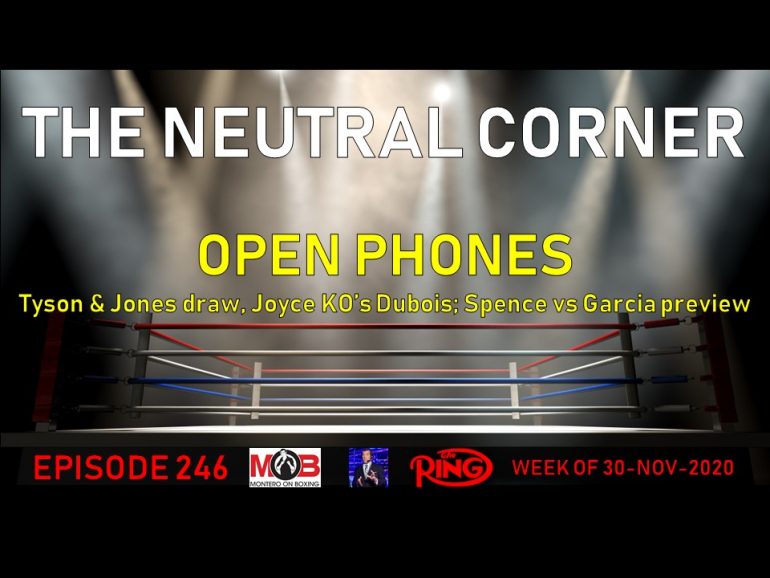 After a three-week hiatus, The Neutral Corner boxing podcast returned with episode 246. Host Michael Montero opined on USA Boxing’s decision to delay the 2020 National Championships to next year over COVID concerns, and the upcoming December fight schedule. DAZN in particular has a loaded lineup featuring the ring returns of Anthony Joshua (Dec 12), Gennady Golovkin (Dec 18) and Canelo Alvarez (Dec 19).

On Saturday, November 14 in Las Vegas, Terence Crawford scored a TKO4 win over Kell Brook, while Joshua Franco and Andrew Moloney fought to a No Decision. The Nevada State Athletic Commission (NSAC) ruled that an accidental headbutt caused damage to Franco’s eye, which led to the stoppage of their super flyweight rematch. Montero, along with many others in the media, felt the damage was due to punches landed by Moloney (51 according to CompuBox).

In London, Katie Taylor defeated Miriam Gutierrez to defend her undisputed lightweight title, prompting the Ring Ratings Committee to move Taylor into the top spot on the women’s pound for pound list. This decision angered some in the boxing community, who feel Claressa Shields should be #1. Montero argues that Taylor has fought the much better opposition, including victories over two fighters currently rated on the pound for pound list, and the current undisputed welterweight champ. Meanwhile, six of the eight world titles that Shields has won were vacant, fighting in divisions with very limited talent.

On Saturday, November 28, Joe Joyce stopped Daniel Dubois in a battle of undefeated heavyweight prospects in London. Many fans, media and even some fighters themselves criticized Dubois for retiring after suffering an orbital bone fracture and nerve damage to his left eye. Montero feels that criticism was unfair and hypocritical, especially from boxing fans who complain about fighters not taking challenges and padding their records.

Later that night in Los Angeles, Mike Tyson and Roy Jones fought an exhibition match that ended in a draw. In the co-feature, YouTube celebrity Jake Paul brutally knocked out former NBA star Nate Robinson. In an instant, social media was bombarded with hilarious memes of the knockout, as well as complaints about Paul’s large fight purse. Once again, Montero called those complaints hypocritical, citing simple economics and the law of supply and demand. Many of those ranting about Paul’s exorbitant purse don’t seem to mind when a mediocre heavyweight gets paid more than a world champion flyweight. The same goes for superstars like Floyd Mayweather, who ranked in tens of millions of dollars while several of his opponents were paid around 5% of the purse split.

This Friday, December 4, Billy Joe Saunders fights Martin Murray in London. On Saturday just outside of Dallas, Texas, it’s the return of Errol Spence Jr. The unified welterweight titleholder faces former junior welterweight champion on Fox PPV. Last October, Spence survived a horrible car accident. Many fans questions if he’ll ever be the same. Despite all the uncertainty, Montero favors Spence to beat Garcia by decision.

The first caller spoke about Mike Tyson’s star power, his accomplishments as a young fighter, and how it’s all still relevant today.

“Mike Tyson’s legacy as the youngest man to ever win the heavyweight title, will go down in boxing history as probably the hardest record to ever attain. And we saw it this weekend when Dubois fought Joyce. You can’t just throw young guys to the lions, especially at heavyweight.”

Hamed from the UK felt that Daniel Dubois’ management failed him with poor matchmaking prior to his fight with Joe Joyce.

“When the fight was first made, I was picked Dubois. During fight week my heart was saying Dubois but my head was saying Joyce. When you look at the guys Dubois had fought, there was nobody in the opposite corner that people felt would give him trouble. I think he could have been matched up better. Look at the guys Joyce has fought, like Jennings and Stiverne, maybe not the greatest opposition but at least they were seasoned pros or former champions.”

One caller didn’t understand some of the criticism over Jake Paul’s big purse for his fight against Nate Robinson on the Tyson-Jones PPV card.

“People should relax man, it was just a fun little gimmicky fight. Everybody has to get so worked up. All the boxing snobs complained, saying that fight shouldn’t be on the card, but they were bringing in a lot of the fans. That’s why Paul got the big paycheck and got a lot of the headlines. That’s just the reality of the situation.”