Teofimo Lopez gives thanks for his grit, informs us he beat Loma with a broken foot 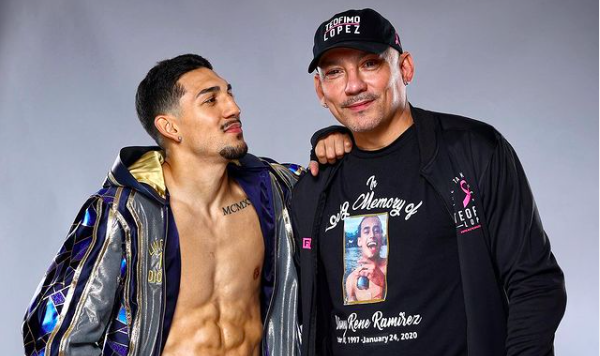 Not everyone is fully enamored of the father-son story that is the Teofimo Lopez/Junior Lopez storyline.

That’s OK, Mark Kriegel will continue to be on it, for those that see a dynamic duo when they look at the Lopez boys, and anyone else can pay attention to whatever elements they care to, or not.

I dig it. I respect it. The ups and the downs those two, and that family have dealt with, and the way the 23 year old has had a bunch of it play out in the public sphere, it holds my attention, and I identify wth it.

I told the 16-0 Teofimo on the phone the other day the same, and that, furthermore, I got more than a bit of respect for his dad, who at times boils over and spews his passion here and there.

It can be hard for some to handle, they have for years busted on him, behind his back, for talking in grandiose fashion about his boy. And it was hard for me to see the kid getting emotional, as he did camp for the Vasiliy Lomachenko fight, where his dad kept Lombardian watch over his offspring, and didn’t often let up the throttle of encouragement.

“That picture,” I told Teofimo, the one going around of you and your dad, “it’s beautiful.”

“Which one now,” said the current Arkansas resident, who is advised by David McWater, the NYC businessman who helms the management collective Split-T.

The one where you’re looking at him. (The lede image topping this story, photo by Mikey Williams/Top Rank.)

Yeah, the one that believed totally, fully, overwhelmingly, that you could beat the guy deemed pound for pound best in the sport by no shortage of experts as late as Oct. 16.

OK, so dad knew. Did he KNOW? Was he sure that he’d beat Loma? C’mon, the fight is past, you can fess up now, if there was a pocket of doubt needed dispelling…

“I knew one thousand percent, no doubt, WE knew we were gonna win,” the 16-0 fighter, who holds the WBA, IBF and WBO belts, and the RING strap, to boot.

He touched on what he’s been up to since he put a Taser shock into plenty of people who thought that Ukrainian would take him to school, paddle him, take his lunch money, and then stare nasty daggers at his dad.

Him and his missus are having a house built, in Arkansas, he reported. “From scratch!” So, no triumphant return to Sunset Park, Brooklyn for the Top Rank ace? He staying in Arkansas? “Yeah, I am. They’re giving me the key to the city,” he said.

I wouldn’t move either…

The residence should be done by February, Teofimo continued, and it sounds like he’s grooving on the vibe in the mid-South. He’ll be on one acre of land.

Never been to Arkansas, I told him. Now I got someone to visit! But, I noted, I wouldn’t come wearing the AOC shirt that I had on that very moment. He cracked up, and said there’s a good mix of people there.

We touched on just who believed that he could better Loma, and who at least entertained the possibility and whose jaw dropped when round after round unfolded, and he was taking the 10s on judges’ scorecards. “Everybody got it wrong, and everybody can…”

Was he going to say, “Can f–k themselves?”

Maybe, but I interrupted him. “Can,” I think of Broner when you say “can.”

“That is Broners’! I always think of him when I say that,” he said, laughing again.

Yes, he’s made it a point a few times publicly to remind us that he noted who acted like a believer, and who seemed to be shocked that Loma didn’t get that paddle out. But no, he doesn’t seem fixated on it, like how Deontay Wilder seems to be fixated on alterna reasons as to why he lost to Tyson Fury Feb. 22.

“It’s all good,” Teofimo said. “It was an eye opener, people realized that there’s more to this cat than what we saw. It’s all about surprise, shocking the world.”

It WAS all about that. We are a forward thinking society, often, to be frank, too much so. Like how so few questions are about dissecting what we just saw, at a post-fight presser, and more are about what will come down the line, in three or six months. I mixed the past and the (maybe) present, when I told Teofimo that me, I’d love to see a rematch with Lomachenko. 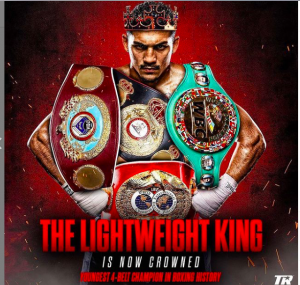 We talked current events, that Crawford v Top Rank internal spat. I wondered if he was one of the prima donnas Bud was talking about, who supposedly got preferential treatment to him.

I’m not saying it was ‘bait,’ but I am saying Teofimo didn’t latch onto it.

“I think Bud knows boxing, he was always rooting for me. There’s nothing but mutual respect there.”

I chuckled, and gave the kid props, for being an adept political player. “Nah Woods, it’s not political. I got other plans on that, eventually. Being politically correct, all that will stop,” he said.

The implication is that he’s choosing words wisely, maybe more than given credit for, being the son of “Junior” Lopez, the son of a guy who can be relied on to shoot from that hip most the time.

He has not and did not pull a punch regarding Devin Haney. He thinks the Cali boxer is all hat, no quality cattle.

“Young fighters, they talk money. A Haney saying they make more than we do. We did the Loma fight, he fought Gamboa. He’s older, alright, good for you, congrats. You continue to make same the one mill. I’m at five million now. Now I’m over you. I have 16, you have 25 fights, who’s really winning?”

Lopez risked his “0” against a master craftsman..and now will reap larger rewards. He is hoping more young fighters follow his lead, and accept coin flip fights.

“I can go to Australia, make 10 million. (Writer Note: We presume that might mean fighting 19-0 Aussie George Kambosos, rated No. 1 by the IBF). But all that talk about money is small minded, short sighted,” he said. These types of guys, “they wanna show the cars, I guarantee they’re gonna be broke.”

Oh yes, this young gun is doing it right for the age we are in, he’s going to have plenty of anti-fans, people who tune it to his fights hoping he gets his ass kicked. He isn’t too worried about tamping down the voltage, so as not to offend anyone.

He’s got haters…For example, I told him, I’ve heard some people protesting, that Teofimo shouldn’t be saying he’s about Brooklyn.

Noted, I told him.

Maybe I will see if Sunset Park has a mayor, see if they want to give him a key to that section of the city, I informed him.

I see and hear a New York attitude in the kid, I will say that. I heard it as he finished up, when I asked him for info on what he’d be fighting next.

March? April? May? He’s thinking April or May, maybe in Australia, maybe in Florida, maybe in NYC, at MSG.

“Woods, tell them this,” he said, offering up a juicy one for the road. “Tell ‘em I said, ‘And I beat Lomachenko with a broken foot!’’

WHERE DOES RING HAVE Teofimo Lopez ON THEIR POUND FOR POUND LIST? Click here to see for yourself