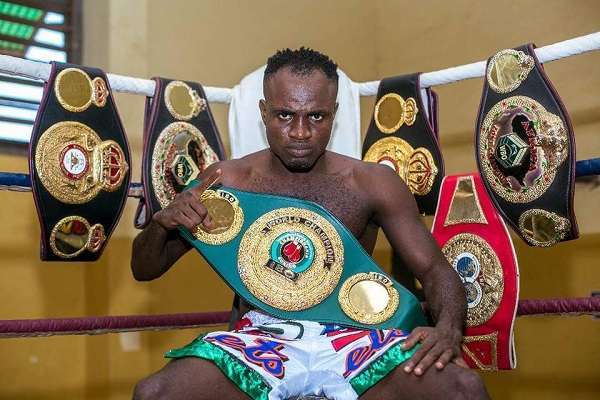 After a fight postponement due to the COVID-19 pandemic, Ghanaian lightweight contender Emmanuel Tagoe will face Mason Menard on Friday.

The 10-round bout will take place at the Seminole Hard Rock Hotel and Casino in Hollywood, Florida and will precede the main event between super middleweight contender Daniel Jacobs and Gabriel Rosado. Both fights will stream live on DAZN (8 p.m. ET/ 5 p.m. PT).

Tagoe, who is rated No. 10 by The Ring at 135 pounds, last fought in July of last year, when he stopped Ishmael Aryeetey in Round 6. He was scheduled to face Ray Perez of the Philippines on March 12, but that bout was cancelled.

Despite the setback and being out of action for several months, manager Peter Kahn is glad that Tagoe will finally see action this weekend.

“Emmanuel is in the best shape of his life,” Kahn told The Ring. “A lot of people see him rated high in the world rankings but haven’t had the opportunity to see him fight. He had a full training camp and is ready to shine on November 27.”

Tagoe (31-1, 15 knockouts) has not lost a fight since June 2004, when he suffered a fifth-round stoppage defeat in his professional debut. His fight against Menard will mark the second time he has fought in the U.S. In August 2013, he ventured to Cabazon, California and stopped Gerardo Robles in nine rounds. The 31-year-old has stopped seven of his last 10 opponents.

Kahn, who co-manages Tagoe along with Ghanaian national soccer player Asamoah Gyan, believes his fighter is on the cusp of competing for a world title.

“Tagoe is ready to fight for a world title, and I am confident we’ll see [WBC titleholder] Devin Haney next.”

Menard (36-4, 25 KOs), who resides in Rayne, Louisiana, has won his last two bouts since losing by knockout in the opening round to Teofimo Lopez in December 2018. The 32-year-old has also suffered knockout losses to Ray Beltran and Haney.