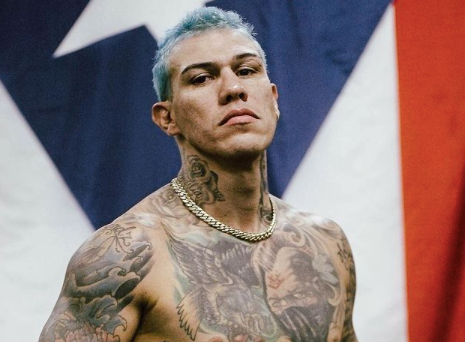 You don’t want to offend someone, inadvertently, when you are doing an interview, and that goes that much more if you are talking to a boxer.

Nah, not because you are afraid they might whup you. No, it’s because someone trying to make a living in the hurt business deserves an extra measure of respect from all on the outside, peering with cupped hands into the arena, tapping notes on the keyboard, bravely with that safety that comes from being out of range,  as two beings battle for supremacy of the moment.

So, with that all in mind, I formulated how to describe Gabe Rosado, to Gabe Rosado, on the phone. I hesitated, I didn’t want to call him an “ultra vet,” because, I don’t know, that should probably be reserved for someone older than 34 years old.

“You are a VETERAN,” I finally said to the 25-12-1 fighter, who gloves up Friday, meeting Danny Jacobs (36-3; rated No. 10 by RING at 168, RING has Callum Smith No. 1) in a super middleweight battle. They face off in Hollywood, Florida, at the Hard Rock Casino, a match you can watch on DAZN.

“Yeah, I’m got 15 years coming,” answered Rosado, who debuted against 1-2 Phil Hicklin at the National Guard Armory in Philadelphia.

Rosado would do just fine on the long-term memory portion of a neuro test; I asked him to re-collect what he could remember about his pro debut.

“Hicklin, big, black guy, looked like 50 Cent, had muscles on muscles. He was eight pounds over, but I kayoed him in the first round,” Rosado said of the January 13, 2006 tussle. “It’s funny, how they allowed that. It showed how crazy Philly was.”

Gabe hit a re-set button, and moved to the West Coast a while ago, the first half of 2014. 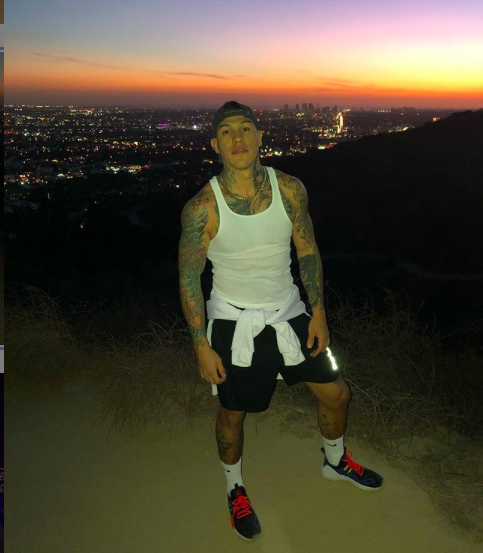 You could start thinking about his career, his place in the game, and maybe muse that he deserves more credit than he gets, for his perseverence, his longevity. Then, when you bring that up, you realize that he does get a good amount of props, from fans, promoters, programmers….Because even though his record is not gleaming, he still gets gigs.

“People say you gotta roll with the punches, exactly,you gotta have a short term memory, can’t get caught up what could happen if I did this,” he said. “You gotta put that behind you, and not do it. Do I get proper credit? Probably….the networks, the promoters still put me in these big fights. The fans keep me relevant. I’m one of those fighters, win, lose or draw, I entertain. I think if you give a good performance, put all out in that ring, fans are gonna respect you.”

You can put to Rosado as Exhibit A the next time you find yourself worked up as to why boxing fixates on the undefeateds, and too often factors how shiny that record is, versus what sort of showing that record-holder usually offers when gloved up.

Now, that isn’t to insinuate that the sport still too much focuses on aesthetic appeal, record-wise, and, to be honest at times, regarding technique/strategy/fighting style. Risk-averse “technicians” still get more love from programmers than is wise, if said programmers are indeed seeking to attract “fight fans” to their fare. We can pretty safely assume that on Friday night, Rosado, who last battled Dec. 20, 2019 and gained a win over 33-8-2 Humberto Gutierrez Ochoa, will be seeking to make a “fight” of it. He certainly did in his second to last outing, against Maciej Sulecki March 15, 2019 in Philly, when he put a scare into the Pole with two knockdowns in round 9, before absorbing his 12th loss, via UD10.

We can see Jacobs trying to smart-box, set the table and tone with the jab, use a mobility edge to get angles, and get out of harm’s way, to win rounds.There’s the possibility that the bad blood we saw here, below….

…bubbles up again, and we see tempers flare, and more rumbling take place than Team Jacobs might like when they draw up the game-plan. “You CORNY, you corny as shit,” Rosado slammed Jacobs, who said that Rosado’s record should disqualify him from fighting the New Yorker.

This one will screen on DAZN, that OTT platform which has done a tightrope walk as COVID tested the endurance of that crew, as they saw their content streams dry up, while also trying to figure out how to manage the relationship with their marquee talent, Canelo Alvarez.

Coronavirus protocols have solidified and people now better understand that, indeed, in-shape athletic types under 40 are in a good position, even if they contract the virus, to get over the condition rather quickly. DAZN has totally dealt with growing pains, but may well be pointed in a decent direction, with a Canelo fight (against Callum Smith) there to lure or retain subscribers, on Dec. 19. They are rolling out the service on multiple continents really soon, and so there will be more of an embrace of boxing as a global sport. Anthony Joshua will be the favorite against Kubrat Pulev, and outside the UK, that match will be there for DAZN subscribers to watch Dec. 12. Looking ahead to 2021, with Golden Boy seeking to show the planet that they as promoters are fighters, and can nurture prospects (Ryan Garcia, Vergil Ortiz Jr) into champs, yeah, I’d think the suits at DAZN have to be not a little pleased, because their train could have swerved hard off the rails, and stayed there.

Back to the Friday main event….I don’t get the sense that Rosado has capitulated to those Ls, that he has made a concession to himself, of what he is, and what he isn’t. He doesn’t have the sound of the guy who is trying to convince you that he is coming to win, and flip over the table, and snag those chips…but who actually is more likely to see going the distance as a victory.

“When you’re looking at guys we love, like Sugar Ray Leonard, Marvin Hagler, Roberto Duran…Muhammad Ali, he lost five times, no one thinks of his losses, they think how great he is,” the fighter told RING.

“What’s gonna make this Jacobs fight so attractive is when the underdog comes out victorious, that
will speak volumes, speak for the every day blue collar worker,” Rosado continued.

Rosado is a grinder in the ring, and outside, too. He puts in the hours at his boxing gym, in downtown LA, which he opened up two years ago. His still new pairing with Freddie Roach, he tells RING that “Dedham Freddie” and him mesh real well. 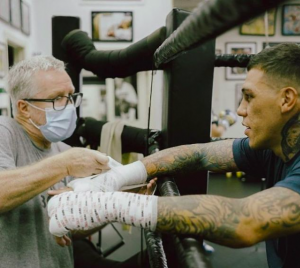 Followers of Rosado’s career remember him with Billy Briscoe (“he’s a great trainer”) and also Jesse Reid, who is, yes, an ultra vet. He then had Fernando Vargas cornering him, Rosado grabbed a win over Josh Clottey (12-15-2015) with Vargas helping steer. Also, Greg Hackett, a friend in Philly, did corner duties.

He enjoyed film work–he was in “Kingdom” and then “Creed,” in 2014 and then 2015, but the acting bug hasn’t over-whelmed the desire to give punishment and take shots, and see who is the better man, for prize money.

He tells me that Roach is happy with his effort. “The relationship is perfect, it’s about having a good game plan, it’s about staying consistent, and Freddie wants nothing but hard work,” he stated.

And, in case you are curious, he says that yep, he’s 34, but he’s not needing to take those days off because Father Time sent a memo, in the form of a lack of energy, because of a depleted storage of energy.

“It’s the hurt business, I put in everything I got every day in the gym, and when I’m not able to do my best, I gotta hang em up…but I got a lot in the tank,” he insisted.

OK, so this Friday night fight…does he see it as a 50-50 endeavor? “I’m gonna go in there, I’m gonna give it all I got, I think it’s a fight..we’re roughly the same age (Danny is 34 in February), same mileage (DJ went pro in 2007), it’ll come down to who wants it more. At this level, anyone is good, it’s about learning to adjust. He’s going to try and adjust to what I do, I just have to make the move quicker. It will be about who bites down, who wants it more. Maybe,” Rosado suggested, “Danny’s a little more civilized.” Yes, Jacobs timed his peak in the boxing game nicely, as he has benefitted really, really well from the tsunami of capital that Al Haymon and then DAZN have sloshed around since 2015, so it’s not so loopy to at least wonder how easy it is for Jacobs to get up for fights that don’t involve titles, Golovkins and Canelos.

Rosado chuckled, and yes, I did too. You remember the Marvin Hagler line, which I’m sure has been said in some form since prize money inequality started getting to the point where the champs could afford the silk pajamas and/or sheets and the brand of mattress that encourages ignoring the alarm clock to pop up and do that AM road work.

“I’m just excited for this,” Rosado said, in closing, “and I think it’s gonna potentially be a fight of the year. My prediction? I’m going to go in prepared, I’m definitely gonna go for the stoppage, but I’ll take the win either way.”