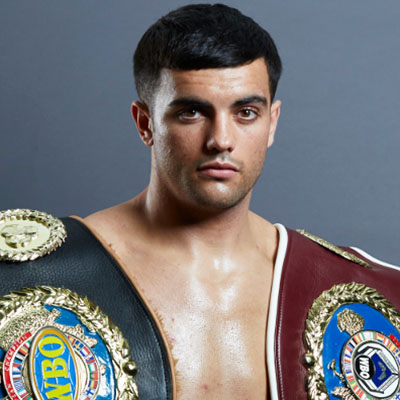 When Jack Catterall steps through the ropes this weekend it would have been more than a year since his last fight.

The mandatory contender for the WBO junior welterweight title has had to sit on the sidelines and wait as the boxing world makes its Covid arrangements. Even then Catterall (25-0, 13 knockouts) was keeping busy, hanging fire for his shot, when he outpointed Timo Schwarzkopf over 10 rounds in Dubai.

There can be no slip ups when he meets Frenchman Abderrazak Houya (14-2, 2 KOs) on Saturday night on a bill topped by heavyweight juggernauts Daniel Dubois and Joe Joyce.

Houya wasn’t anyone’s first choice, but after some failed Covid tests and with limited time for other prospective opponents to make the weight, Houya got the call.

“They’ve picked this guy and I said yes straight away,” said Catterall. “I’ve had a quick look at him and that was enough.”

It’s fair to say it’s been a frustrating year for the Chorley southpaw, who’s trained by Jamie Moore and Nigel Travis, but he says he’s not overlooking his opponent as he waits for his title shot.

“None whatsoever,” he added, when asked whether there’s a chance he’s taking Houya lightly. “I’ve trained hard all year round and I’m confident in my ability. I believe I’ve got to run through someone like this to keep proving my worth. I know potentially how big next year could be. I’m still mandatory for the world title, so I’m fully focused on going in there and doing a job and securing big fights next year.”

He’s stepped aside to allow 140-pound ruler Josh Taylor and WBO junior welter champ Jose Ramirez to unify, convinced that 2021 is his year. The Scot, Taylor, is his preferred opponent and he’s certain Taylor beats Ramirez, should they meet.

“It’s been going on for the last 18 months and every time I do interviews, I say I can’t wait to secure these big fights, I’ve beaten everyone asked of me domestically,” Catterall stated. “Although this year it’s not just been me. I’m lucky enough to get a run out before Christmas, I’m grateful for that.

“Everyone’s in the same boat. Everyone’s had the best part of the year missing in their sporting career, I’m just so eager to get hold of these big fights so hopefully next year they can be delivered, I can keep my mandatory position and move on from there and see how good I really am and test myself against the top boys in the 140 division.

“I believe Taylor’s got the beating of Ramirez, who I’m mandatory for with the WBO title. That still stands, but obviously with the situation agreeing to step aside, they’re going to hopefully fight at the start of the new year and come late spring-early summer, I’ll be primed and ready to get my crack at them belts.”

In the space of the last month, however, Taylor’s name has been floated as a possible foe for Teofimo Lopez and Terence Crawford. Is Catterall concerned he won’t stick around for their fight?

“You can get worried over it, but we’re both under the same management umbrella and I know Frank works closely with Bob Arum so that kind of stuff is out of my hands,” he explained. “I’m mandatory for the title so I’d love to get that crack at Josh Taylor if he beats Ramirez. There’s been talk of it being at Edinburgh Castle, when the crowds are back and that’s all well and good.

“But ultimately I’ve got to win on Saturday and no matter what happens, whether Taylor-Ramirez goes ahead or if it doesn’t, I’ll get a straight crack at the WBO title.”

While he would move up for the right fight, he wants to stay at 140 for another two or three years. He also contends that having had around a year to work behind closed doors the 27-year-old thinks he will show improvements rather than ring rust.

“I do believe so, yes,” he concluded. “In the first lockdown, everything was closed, but in this lockdown professional sports have been going ahead. I’ve been maintaining all year round. I’ve been looking after my body and my well-being and I’ve been in the gym with Jamie and Nigel. We’ve been working, so I think people will definitely see improvements on Saturday.”