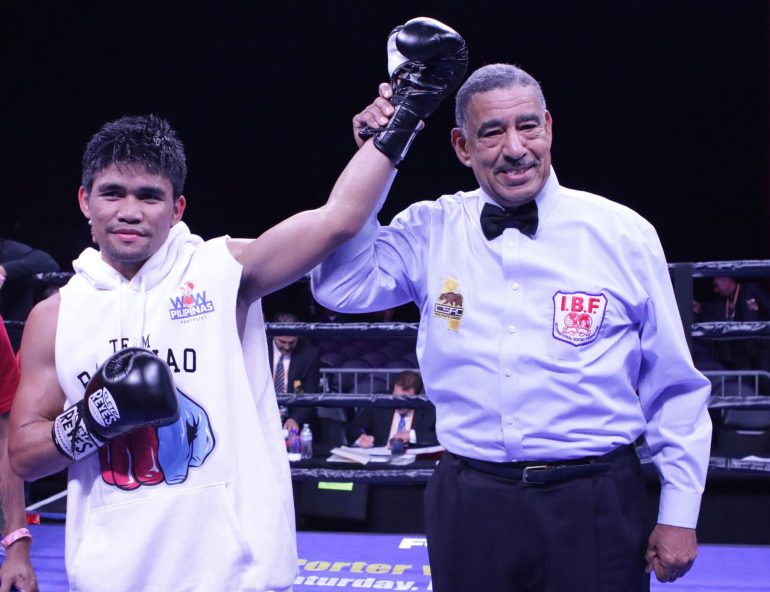 Jim Claude Manangquil has been promoting pro boxing shows since he was 16 years old. Still, the 27-year-old said Saturday’s event at his own gym in General Santos City, Philippines was the most difficult he’d ever promoted.

“It was harder than a world title promotion,” said Manangquil, President of Sanman Promotions.

Without any television support, Manangquil promoted a five bout card at the Sanman Gym without any fans in attendance and a maximum of seven people allowed inside at a time.

The boxers mostly came from the same region in Mindanao for Sanman’s first show since February, and the second in the country since the Covid-19 pandemic began, following Omega Promotions’ event last month in Mandaue City, which was headlined by Christian Araneta’s decision win over Richard Rosales.

All participants for Saturday’s show, including officials and trainers, had to be quarantined in General Santos City for 14 days, and pass a swab test before the weigh-in.

Some boxers, Manangquil says, asked for more money because of the lengthy quarantine requirement, but the promoter says the experience made him more confident about continuing business in the pandemic.

“I think this would make me do more shows because before this I was so hesitant because of the rules,” said Manangquil.

The show was headlined by the return of former WBO bantamweight titleholder Marlon Tapales, who stopped Eden Sonsona at 46 seconds of the second round. Tapales (34-3, 17 knockouts), who was fighting for the first time since his December loss to Ryosuke Iwasa, looked fleshy at 132 pounds, which was about 11 pounds heavier than his previous fight, but four pounds lighter than Sonsona.

The 28-year-old didn’t have to look hard to find the combative Sonsona (36-12-2, 13 KOs), who met the fellow southpaw at center ring to trade punches. Tapales scored two knockdowns in the first round, both on right hooks.

The fight came to an end moments into the second, when a right uppercut caused Sonsona to turn around and collapse, compelling the referee to stop the fight.

Manangquil says his next show will be on December 12, and will be feature junior bantamweight prospect KJ Cataraja (11-0, 9 KOs) against Ponciano Remandiman (10-5-1, 5 KOs) at the Tabunok Sports Complex in Talisay, Cebu.

Manangquil says the show helped provide some of his fighters with some much-needed holiday money, and, at least for himself, something a little more.

“I also want to end the year with hope.”