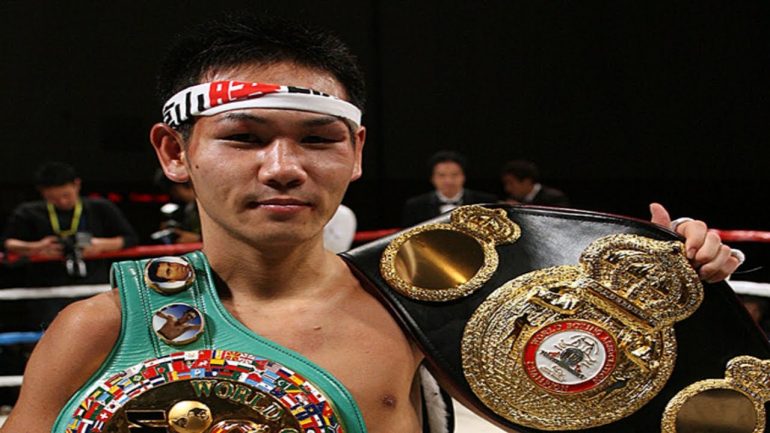 Former four-time strawweight titleholder Katsunari Takayama will return to professional boxing after a four-year hiatus when he faces Reiya Konisha at the Bunka Center in Sanda, Japan on Monday.

Takayama could have looked for an easy comeback opponent but sought out the toughest challenge he could find.

“[Konishi] agreed to fight me, while a lot of other Japanese fighters refused,” Takayama (31-8, 12 knockouts) told The Ring through Hank Hakoda. “I have been planning every step of my schedule.

“He is a real match for me. I think highly of his physical power, stamina and mental determination. He throws a variety of left-hand punches, which are also powerful. I know he is a good fighter whom I should be careful with as he is in his prime. I will bring my ‘A’ game into the fight, making the most of my vast experience. I will be in top shape with my best possible preparation to show my respect for him ”

In preparation, Takayama has held training camps in Hyogo, Nagano and Tokyo before heading home to Osaka to get intense sparring sessions with a wide variety of styles.

Takayama, 37, surprisingly vacated his WBO title in 2016 to chase a dream of fighting at the 2020 Tokyo Olympics. However, when the junior flyweight division was dropped in a shakeup, the diminutive 105-pound Japanese fighter, who stands at 5-foot-2, was obliged to compete at 114 pounds.

“I was comfortable with fighting in my natural shape without cutting down my weight because there were frequent bouts in amateur boxing,” he explained. “In terms of the difference in rules, the biggest adjustment I needed was to expend all my stamina for 12 rounds in three rounds. As a pro you can fight by trial and error, but you have no time to switch to plan B in the three rounds. Every moment is decisive for the fight. I really enjoyed the differences.

“I had three amateur bouts without getting a ticket to the Olympics, but I did my best (last August, Takayama was eliminated from the All-Japan Championships Tokai block selection round). I got a lot of beneficial lessons that I can apply to my comeback bout; quicker rhythm and more precise positioning of my head.”

Instead of retiring, Takayama has decided to make another go of it as a professional

“Since I started boxing at 14, I have insatiably loved this sport with my unconditional passion, which still drives me forward,” explained the former titleholder. “That is why I can continue to devote myself to boxing at this age. I still have unfinished business in the ring.

“Looking back at what I have done as a pro, I still have something left in the ring. I have set two goals that should be accomplished. One is to win a WBA belt, but, sorry, I should keep another goal secret until the right time comes. However, I will consider retiring unless any worthwhile opportunity for the world title has materialized by December 2021.”

Konisha turned professional in 2013. He won his first 12 bouts before claiming the 105-pound national title by edging Masataka Taniguchi (MD 10). He went on to make two defenses before stepping up to junior flyweight, where he lost in two world title attempts, first to WBA beltholder Carlos Canizales (UD 12) and most recently to IBF titlist Felix Alvarado (UD 12). The 27-year-old sports a record of 17-2 (7 KOs).