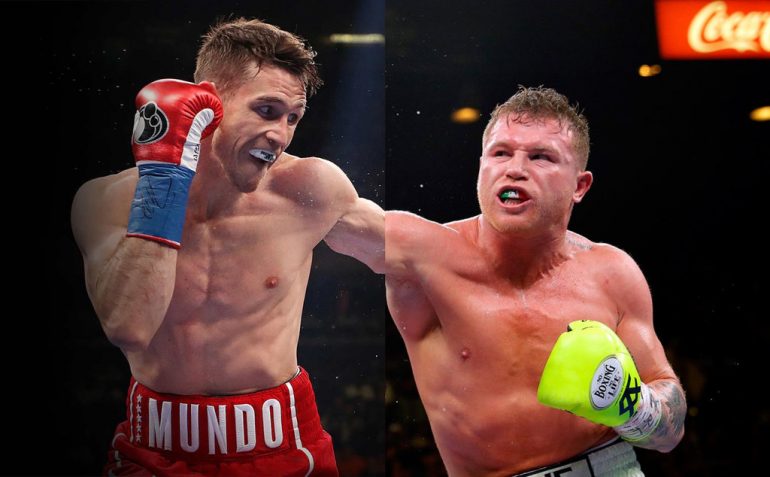 Canelo Alvarez’s long-awaited return to the ring is now official.

Guadalajara’s Alvarez (53-1-2, 36 knockouts) will face Liverpool’s Callum Smith (27-0, 19 KOs) with Smith’s WBA and Ring super middleweight titles on the line December 19. The Athletic is reporting that the fight could end up in Texas.

Canelo confirmed the fight via social media on Tuesday.

Smith will attempt to defend his titles for the third time since he scored a seventh-round knockout of George Groves in September 2018. Alvarez owns a secondary version of the title, one that The Ring does not recognize.

A victory for Alvarez would make him a true four-division world champion.

In a shocker, Alvarez will return to DAZN whom he was squaring off in court with just a couple of weeks ago. The odd reunion comes after Alvarez successfully split with Golden Boy Promotions, with whom he initially signed a $365 million contract to join the sports streaming service in October 2018.

In a one-fight deal, Alvarez, who remains a WBA/Ring champion at 160 pounds, will work with Matchroom Boxing’s Eddie Hearn, who also serves as the promoter for Smith.

Smith’s two defenses of the title have come with a mixed bag of results. The 30-year-old knocked out Hassan D’Dam N’Jikam last June in New York, followed by a disputed victory over countryman John Ryder last November in a hometown scrap.

“Ever since beating Groves I’ve wanted to be a part of the biggest fights and it doesn’t get any bigger than this. Canelo is The Ring Magazine champ at middleweight and he steps up to challenge for my number 1 status at super middleweight. I truly believe I am the best in the division and will prove it on December 19,” Smith told The Ring.

STN Sports, a brand-new boxing management company that launched just last week, signed Smith on the promise that they would deliver big. And they came through for their client with a potentially career-defining clash.

Sean O’Toole of STN Sports: “To deliver a career defining opportunity like this for Callum is a remarkable feeling. We know how much this means to him and are delighted to deliver on his long awaited dream fight. This is a fight we all believe he can win – a fight that will put his name amongst the very best pound for pound fighters.”

In addition to prestige, Smith can also achieve revenge, as his older brother Liam, a former junior middleweight titleholder, was knocked out in the ninth round by Alvarez in their September 2016 title fight.

When they step into the ring, both fighters will be coming off long layoffs. However, this has been a familiar position for Alvarez in recent years.

After two positive drug tests for the banned substance clenbuterol that left him suspended for six months, Alvarez returned in September 2018 after nearly a year out of the ring to outpoint Gennadiy Golovkin in their much-anticipated rematch to become a unified middleweight world champion.

Alvarez settled on Smith after discussions with Premier Boxing Champions to land a fight with unbeaten titleholder Caleb Plant (20-0, 12 KOs) came to nothing.