Shawn Porter’s surprising take on Crawford-Spence, if it ever happens 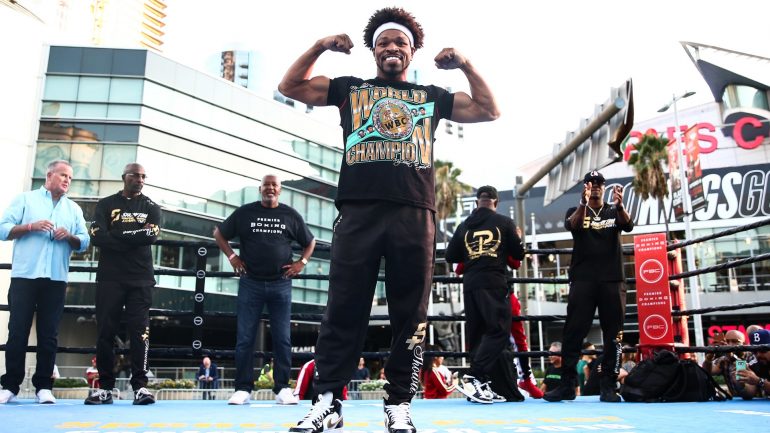 Porter, who is rated No. 5 by The Ring at 147-pounds, is very familiar with both men. He lost his IBF belt to Brook in August 2014 and is Crawford’s friend.

“I thought it was a brilliant fight all the way up until the end,” Porter told The Ring. “I had Kell Brook winning the match, 3-0. I feel Kell Brook was doing a fantastic job with his jab and then he got touched up, just a little bit, and that’s all she wrote.

“I think, Terence Crawford, at the end of the third round, hit that switch and decided to go southpaw. He just seems to be really effective as a southpaw. I think he’s more comfortable as a southpaw. I don’t think he wants everyone to know that he is.”

The likable former titlist points out, however, that Brook isn’t the same guy he fought several years ago.

“After someone goes through two, maybe three wars, they do not want to visit that type of lifestyle again,” Porter explained. “They might go to another war; it’s almost like they don’t have any fight in them. I don’t think Kell Brook had that ready to go-through-fire-type (mentality). As soon as he got touched, he got hurt and he folded very quickly; no resistance, which was the only thing that was disappointing for me in that fight.”

Although Porter (31-3-1, 17 knockouts) is the WBO No. 1-contender, he doesn’t feel a fight with Crawford is imminent and believes he’ll likely go in a different direction.

“I’m going to see how things shake out with Errol Spence Jr. and Danny Garcia (on December 5),” Porter said. “I think that is more than likely going to happen.

“I don’t foresee a fight between myself and Terence Crawford anytime soon. I don’t think that’s the route Top Rank wants to go, but I am the mandatory for the WBO title.”

The fight everyone wants to see at welterweight, and one of the most anticipated in all of boxing, is a meeting between Crawford and IBF/WBC counterpart Spence Jr.

Porter would like to see his two rivals meet, but feels one has a clear advantage.

However, he would be only too happy to trade blows with Spence Jr. in a rematch or against Crawford for the first time.

“I would love a fight with either guy,” he said. “We’ve already seen what happens with myself and Errol Spence Jr. I think a fight with Terence Crawford would be extremely exciting as well.

“I’m a hybrid, I can box and punch and with my movement that would be hard even for someone like Terence Crawford to manage. He’s been able to manage every guy he’s been in the ring with to this point, but I think there’s some things I could present that would make it a very hard night for him.”