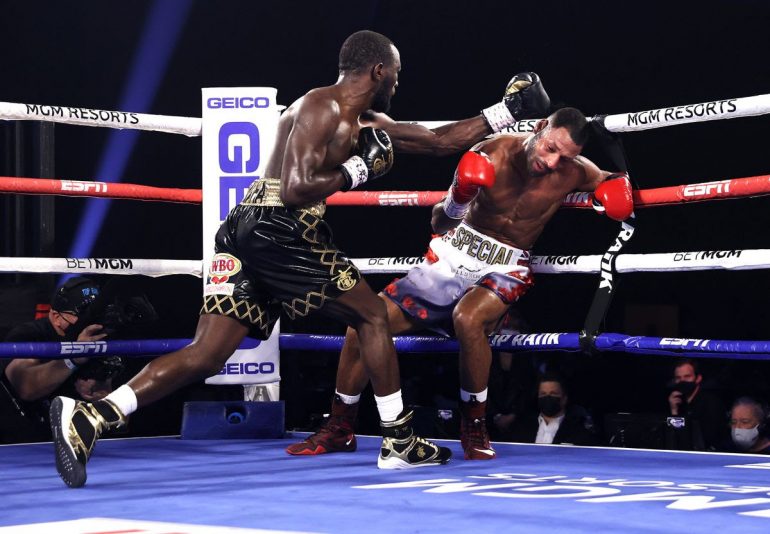 While the boxing world continues to wait for a welterweight summit clash between Terence Crawford and Errol Spence Jr., they finally have a mutual opponent to compare the two.

Crawford needed a few rounds to figure out Kell Brook before a counter right jab knocked Brook into the ropes, and began the process of scoring a fourth round technical knockout. Brook had faced Spence three years prior, giving a strong account of himself until a left eye injury caused by the Texan’s right hand punching convinced him to take a knee for the count in round 11.

Though Crawford had stopped him seven rounds sooner, Brook doesn’t feel it necessarily means he’d win in a battle of The Ring’s top two welterweights.

“Even though I’ve been beaten by [Crawford], I can’t sit here now and say he’d beat Spence, he’d beat [Shawn] Porter because styles make fights,” said Brook (39-3, 27 knockouts) in the post-fight interview. Brook did give Crawford credit for being the first fighter to stop him without an injury being a contributing factor, after suffering eye injuries in stoppage losses against Gennadiy Golovkin and Spence.

“But one thing [Crawford] has got, he’s got good distance, he’s got fast hands obviously and he’s got a good eye to land the shot. It’d be very interesting. Because never in my career nobody’s ever done that to me, in sparring or anything.”

Still, he declined to make a pick.

“I think that’s the fight to make. Even though he’s stopped me tonight, I can’t say he would do that to Spence or beat Spence. It’d be a fight that everyone needs to see,” said Brook.

For now, Crawford’s attentions are on a fight with WBA welterweight titleholder Manny Pacquiao. Top Rank promoter Bob Arum had told the Associated Press earlier in the week that he had “closed the deal” to stage a Pacquiao-Crawford fight in Qatar, but the deal fell apart when the Gulf state was unable to guarantee that fans would be allowed in attendance due to the Covid-19 pandemic. Arum added in the post-fight interview that he’d been in contact with Qatar’s health minister, who opened the possibility of staging the fight there in the spring.

“Now we’re gonna go to the drawing board to try to revisit that fight with Manny Pacquiao,” said Crawford.

Spence has his own business to handle on December 5, when he defends his WBC/IBF welterweight titles against Danny Garcia in Arlington, Texas. The fight will be Spence’s first since being seriously injured in a car accident in October of 2019.

Asked about a Crawford-Spence fight, Arum went into full promoter mode, stating that Crawford would beat both Spence and Garcia in the same night.

“Errol Spence will try to avoid Terence Crawford as long as he can because he knows he can’t beat Terence Crawford,” said Arum. “You saw the performance tonight, he’ll take out Errol Spence in about the same number of rounds like he took out Kell Brook.”