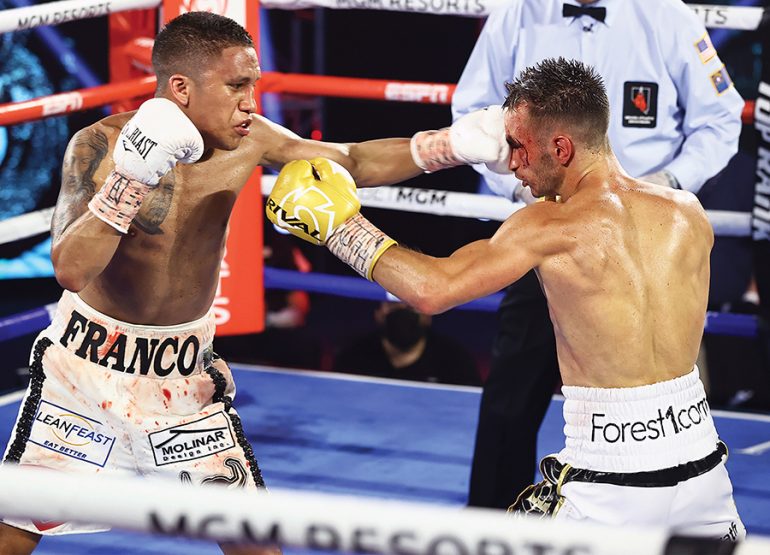 Franco and Moloney in their first fight.
15
Nov
by Francisco Salazar

Joshua Franco’s rematch with Andrew Moloney Saturday night overshadowed an important announcement that will affect the direction of his career.

Franco, who is rated No. 6 by The Ring at 115 pounds, signed a deal with MTK Global and Rick Mirigian, it was announced literally minutes after Franco fought to a controversial no-decision at the MGM Grand in Las Vegas.

The 25-year-old Franco (17-1-2, 8 knockouts) will be advised by MTK Global and managed by Mirigian. It is an identical setup to that of unbeaten welterweight Vergil Ortiz Jr., who signed with the duo earlier in the week. Both fighters are promoted by Golden Boy Promotions.

“This situation with MTK and myself, as well as Franco being trained by Robert Garcia, give him, without question, the best team in the sport,” said Mirigian. “The future is bright for Franco. Very bright.”

Franco, Ramirez and Ortiz are all trained by Garcia.

Prior to the first Moloney fight, Franco was known for his competitive trilogy with contender Oscar Negrete. He was victorious in one bout and fought to a draw in the other two.

Franco is confident that MTK Global and Mirigian will create big opportunities for him in 2021.

“Being signed to MTK Global and Rick Mirigian means a lot,” said Franco, who is originally from San Antonio, Texas and now lives and trains in Riverside, California. “I know Rick is a great manager, who does his best for his fighters, and I’ve heard nothing but great things about MTK.”

“It’s a privilege to again be working with our strategic partner Rick Mirigian on yet another extremely exciting talent.”

Franco claimed a close unanimous decision over Moloney in June and the rematch was eagerly anticipated. However, referee Russell Mora stopped the contest near the end of Round 2 due to severe swelling around the right eye of Franco. Mora ruled that an inadvertent headbutt in the opening round caused the damage.

The Nevada Athletic Commission utilize video replays and longtime referee Robert Byrd was in charge of reviewing the action. He did so for almost 30 minutes. The replay showed that swelling appeared on the face of Franco following a jab to the eye area. Had it been ruled that a punch caused the swelling, Moloney would have won the fight. Byrd sided with Mora and that decision was met with contempt.

A rubber match between Franco and Moloney (21-1, 14 KOs), who resides in Melbourne, Australia, would be the likely fallout from Saturday’s bout, which took place on the undercard of Terence Crawford’s fourth-round stoppage of Kell Brook.

Editor’s Note: The WBA regular title that Franco holds is unrecognized by The Ring. Roman Gonzalez is the WBA 115-pound titleholder.