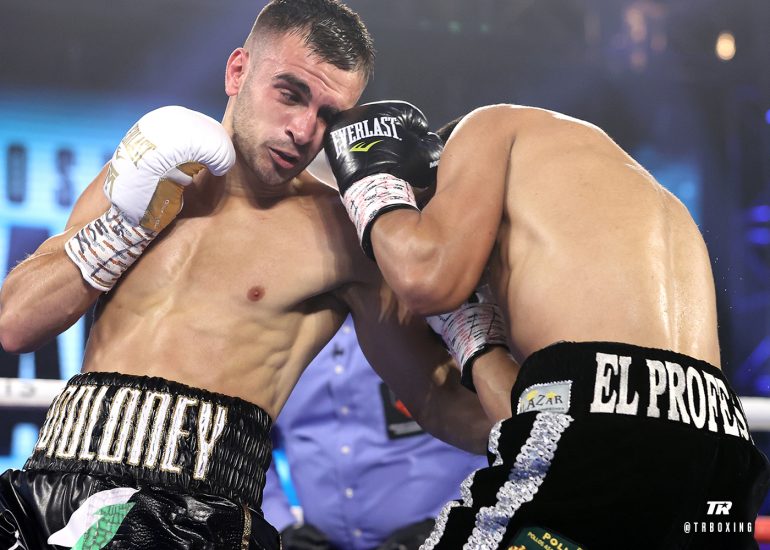 Before round three could start, referee Russell Mora signaled that the fight was over. And that was just the start of the drama.

Mora’s initial ruling was that the Joshua Franco vs. Andrew Moloney rematch would end in a no decision, saying that the swelling which had completely shut Franco’s right eye was caused by a headbutt. Moloney, who was seeking revenge five months after Franco punished him to his first defeat, climbed down from the ropes he was celebrating upon.

Since Saturday’s fight took place at MGM Grand’s “Bubble” in Las Vegas, the Nevada State Athletic Commission has the option to review the call with instant replay. After 26 minutes, with veteran referees Robert Byrd and Jay Nady reviewing replays over and over again, the call on the field stood, with the fight being officially declared a no decision, since four rounds had not yet been completed.

As a result, Franco retains the WBA “regular” junior bantamweight title he had won in his close unanimous decision win over Moloney in June.

Due to what was officially ruled an accidental headbutt, #FrancoMoloney2 has been ruled as a No Decision.

We'll just let you guys have it out in the replies … 🙃 pic.twitter.com/8DAnn0krWV

The ruling was met with derision from ESPN commentators Andre Ward and Timothy Bradley Jr., who both were world champions in their own right. Numerous replays showed a single left jab landing directly on Franco’s eye, followed shortly by the swelling. No significant head clash was isolated on video tape, though Franco’s trainer Robert Garcia suggested that it may have been several small head clashes, as well as a thumb to the eye, which led to the swelling.

“They took this away from me. The injury was caused by a punch. I can’t believe this,” said Moloney, 29.

“I was in control of the fight and on my way to a clear victory. I deserved this win. I landed 50 punches on that eye. It was not even close.”

The anticlimax spoiled what had been an ideal start to the fight for Moloney (21-1, 14 knockouts) of Kingscliff, Australia, who used his feet to get in and out with quick combinations before Franco (17-1-2, 8 KOs) of San Antonio could return fire.

The fight became even more one-sided in the second round, with Franco essentially a one-eyed fighter, missing wildly as Moloney fired off his punches and got out of the way of danger.

All three judges scored the first two rounds for Moloney, 20-18, though they were moot in the end.