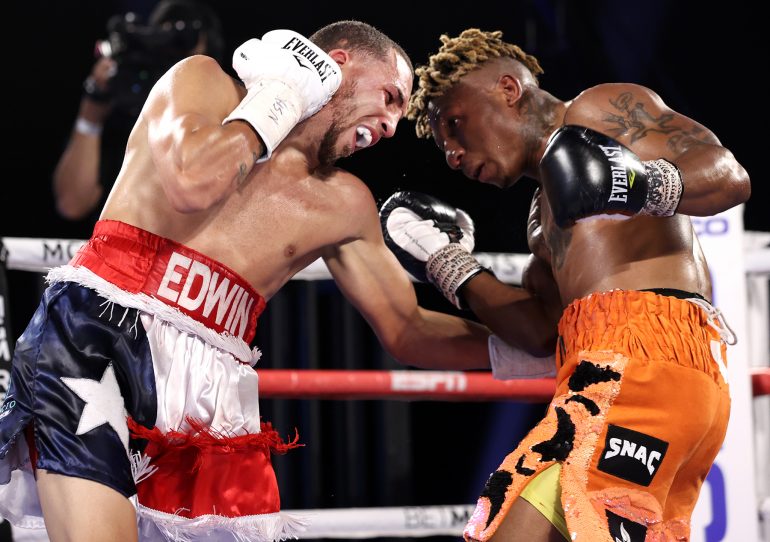 The judges saw it differently.

Judge Adelaide Byrd scored it 77-75 for Edwin Rodriguez. However, John McKaie and Max DeLuca each had it 76-76, leaving Greer and Rodriguez with their second draw as professionals.

The fight marked Greer’s first draw since December 2015 and Rodriguez’s second in his last three fights.

Chicago’s Greer (22-2-2, 12 KOs) fought for the first time since Mike Plania upset him by majority decision in their 10-round contest June 16 at MGM Grand Conference Center. Puerto Rico’s Rodriguez (11-5-2, 5 KOs) was coming off a 10-round split decision win over previously undefeated Saul Sanchez last August.

The fight was close and competitive throughout as both men came forward and looked to exchange on the inside.

The phone-booth action continued in round two, but Rodriguez got the better of the exchanges with combinations upstairs and finishing up with a left hook to the body.

Greer got out of the phone booth in round three and used his boxing skills to secure the round, though Rodriguez was still catching him with solid shots along the ropes.

The fight remained close in round six, but momentum shifted in Greer’s favor as he pushed back against Rodriguez. The 26-year-old, coming off the second loss of his pro career in June, ripped left and right hooks to the body late in the frame.

Rodriguez connected with a strong right hand to the body in round eight as Greer appeared to slow down in the final round. However, Greer surged in the final moments in an attempt to seal the win but was unsuccessful.

Tyler Howard said before his fight with KeAndrae Leatherwood that he wanted to make a statement, but struggled in a unanimous decision win.

While Howard scored a knockdown with just 15 seconds remaining in their scheduled eight-round affair, it was mostly an underwhelming performance from the undefeated middleweight.

Leatherwood, a 32-year-old journeyman from Tuscaloosa, Alabama, backed up Howard early in round two with a solid left hook.

Late in the frame, Howard was cut over his left eye from an accidental headbutt.

Leatherwood continued to have success in round three as he landed with a big overhand right, exclaiming “WOO WOO” with every punch thrown.

In round four, Howard (19-0, 11 knockouts), 26, of Crossville, Tennessee, capitalized on an exhausted Leatherwood, who went down from a left hook to the head. However, referee Mike Ortega ruled that Howard pushed him down.

In round five, Leatherwood (22-8-1, 13 KOs), who was previously warned earlier in the fight for excessive holding, was informed by Ortega that the next violation would result in a point deduction.

With 33 seconds remaining in round six, Ortega deducted a point from Leatherwood for holding.

Howard dropped Leatherwood late in the eighth frame with a right hand to the body but was unable to secure a stoppage as both fighters went the distance.

According to Compubox punch statistics, Howard landed 81 of 329 punches (25 percent). Leatherwood connected with 74 of 244 blows (30 percent). 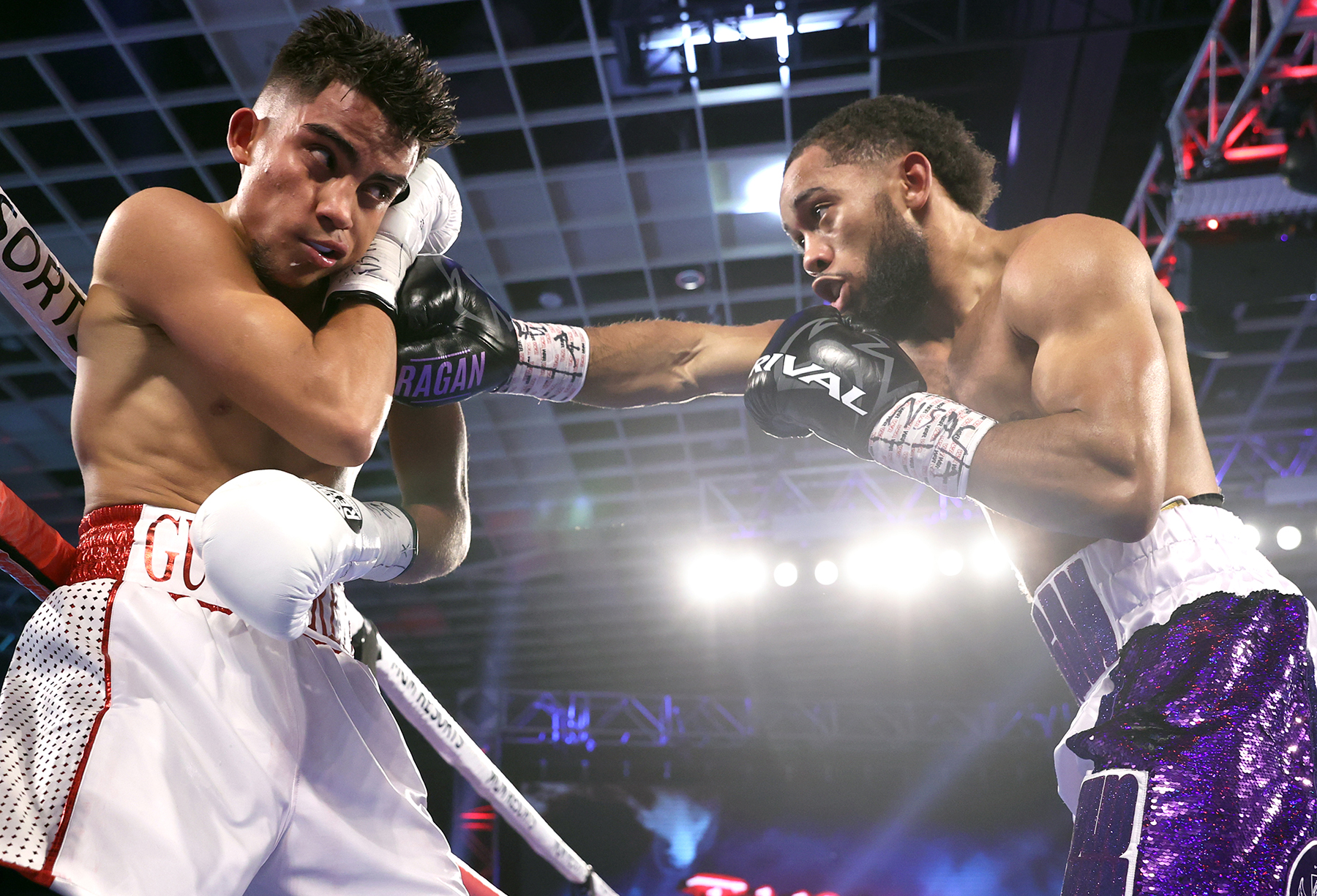 Duke Ragan went the distance for the second fight in a row as he outpointed Sebastian Gutierrez over four rounds.

Ragan scored a knockdown in the second round but seemed comfortable just outboxing his opponent to the finish.

A beautifully timed right hand from Ragan caused Gutierrez’s glove to graze the canvas for the knockdown.

With roughly 1:45 remaining in the frame, Gutierrez turned to rough tactics as he shoved Ragan down to the floor against the ropes.

But Ragan, 23, of Cincinnati, Ohio, who opted to forego an opportunity to go to the Olympics to turn pro, was not deterred.

In round three, Ragan remained calm and composed and was picking his spots in the pocket.

A stiff jab followed by a right hand buckled Gutierrez’s knees just after the halfway point of round four.

Gutierrez, 19, of Oxnard, California, lost for the first time in two professional fights.

Vegas Larfield’s professional debut lasted one minute, nine seconds. His second bout lasted until round three, but he still earned the knockout victory.

Both men wasted no time turning the action into an all-out firefight in the opening frame.

Larfield allowed himself to get wild in round two as Flores countered him with a series of damaging lefts and rights that left him briefly stunned.

But in round three, the 18-year-old slowed down and allowed the fight to come to him.

And it paid dividends.

Larfield floored Flores with a lethal left hook that was set up by a straight left hand. The 27-year-old Mexican Flores beat the count, but his legs were still wobbly.

An Australian named Vegas came to Vegas and did. the. work. 🇦🇺

Moments later, Larfield (2-0, 2 knockouts), who hails from Australia, dropped Flores again with a straight right hand down the pipe. But Flores didn’t give up without a fight.

But it was all for naught as Larfield countered Flores with another stiff left hook that left his adversary out on his feet with his back turned against the ropes.

Referee Celestino Ruiz then stepped in to stop the fight at 1:07 of round four.

Flores suffered the first loss of his career. His record now stands at 2-1-1.

Muratalla’s triumph served as the opening fight of a seven-bout card headlined by Terence Crawford’s 12-round welterweight title defense against Kell Brook at the MGM Grand Conference Center in Las Vegas.

Both fighters were effective early on, each connecting with a solid overhand right.

With two minutes remaining in the third round, Muratalla landed with a strong counter left hook that caught the attention of Porozo.

About 30 seconds later, Muratalla tagged Porozo to the body with a thudding left hook as he caught his opponent walking straight back.

Muratalla followed up with another left hook to the liver to send Porozo to the canvas for the first time in their scheduled six-round contest.

Porozo, who took the fight on short notice, rose to his feet but found himself in trouble just moments later, as Muratalla poured it on as he stood defenseless against the ropes.

A hard right hand from Muratalla sent Porozo down on his bottom against the ropes, and referee Robert Hoyle immediately stepped in to wave off the action at 2:40 of round four.