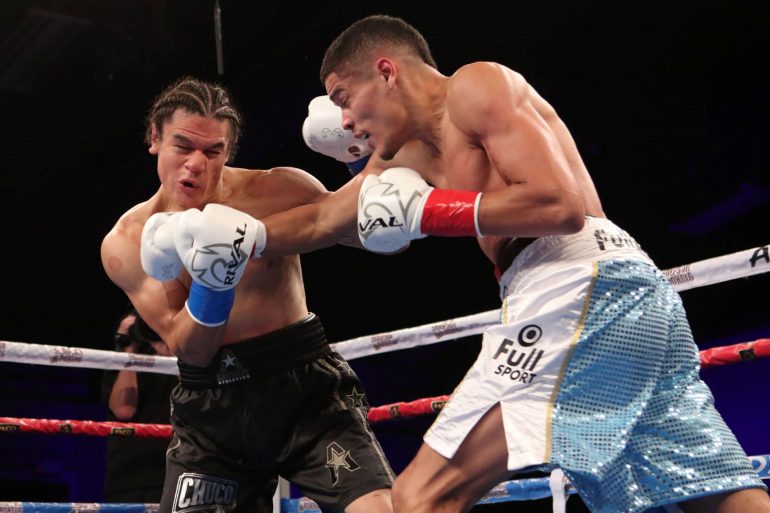 Middleweight prospect Amilcar Vidal has developed a penchant for not only ending fights early but doing so against unbeaten fighters.

The hard-hitting Vidal faces another undefeated fighter tonight when he squares off against Edward Ortiz at the Microsoft Theatre in Los Angeles. The 10-round bout will headline a three-bout FS1 telecast (8 p.m. ET/ 5 p.m. PT).

Vidal (11-0, 10 knockouts), who now resides in Coachella, California, has not fought since January 4, when he stopped Mexico’s Leopolda Reyna in the opening round in his hometown of Montevideo, Uruguay. Vidal dropped Reyna twice before the fight was waved off.

In his prior bout, the 24-year-old Vidal scored a first-round stoppage over Zach Prieto, on a “ShoBox telecast”, and Carlos Capelari was also taken out inside the opening three minutes in January of last year. Both opponents were unbeaten coming in.

Vidal was penciled to fight in late April but promoter Sampson Lewkowicz told The Ring in a previous interview that those plans were scratched due to the COVID-19 pandemic.

Ortiz (11-0-2, 4 KOs), who resides in San Antonio, Texas, should present a challenge. The 29-year-old has a height and size advantage over Vidal, who has mostly fought against shorter and smaller fighters.

In his last bout, on August 22, Ortiz defeated Antonio Todd by split decision. He has won his last eight outings, two by knockout, since battling to a draw against Sharif Jones in March 2017.

In the co-feature, cruiserweight Efetobor Apochi (9-0, 9 KOs), who is originally from Nigeria and now lives and trains in Houston, will face Joe Jones (11-2, 8 KOs) of Jersey City in a 10-round bout.