Rashidi Ellis: ‘If I have to fight Terence Crawford or Errol Spence…I’m ready’ 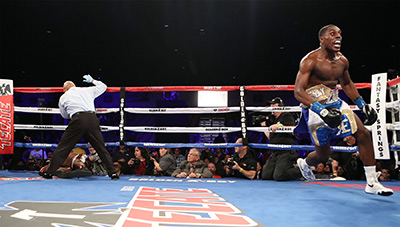 Rashidi Ellis has never been one to deliver long speeches. The welterweight contender is comfortable allowing his hands to do most of the talking while getting to the point.

In an interview with The Ring Thursday morning, Ellis didn’t miss a beat.

“If I have to fight Terence Crawford or Errol Spence to prove that I’m the top dog, I’m ready,” Ellis stated. “I belong with the best in the division.”

Ellis will probably have to face a more significant name before a fight of that magnitude comes to fruition. But fellow unbeaten welterweight Vergil Ortiz Jr. (16-0, 16 KOs), who like Ellis is promoted by Golden Boy, likely wants to rein in on his ambitions.

It’s OVER!! @RashidiEllis stops Corral in the 7th to improve to 21-0 (14 KOs) #TeamSpeedy Catch all the action LIVE on Facebook: https://t.co/mJWXqMxuQI pic.twitter.com/hTJauBFUso

The 27-year-old from Lynn, Massachusetts, a suburb of Boston, added that Ortiz is also on his radar.

“I want that fight. I’ve been asking for that fight,” he added. “I don’t see why that fight can’t happen.”

His performance was the epitome of the sweet science, as he nailed Rocha at will and was seldom touched during their 12-round bout.

Ellis knows what he’s up against. Boxing is a business, and it is unlikely a company will pit some of their brightest talents against each other so early in their respective careers.

But Ellis stressed that he is willing to face Ortiz, but will the latter’s team be reluctant to make the fight happen?

“It doesn’t matter at this point, I’ll fight the winner of Errol Spence-Danny Garcia.”

“I just want to fight them now and get it over with,” Ellis added. “I want to get all the belts.”

Ellis, who sparred eight-division world champion Manny Pacquiao in preparation for the Filipino’s much-hyped 2015 mega fight with Floyd Mayweather Jr., is also motivated to take care of his loved ones, including his son.

“Taking care of my family and friends is a constant motivating factor for me,” Ellis said. “You need a solid team behind you.

“Boxing is a challenge, but it’s a challenge that I enjoy. I’m going to become a world champion.”