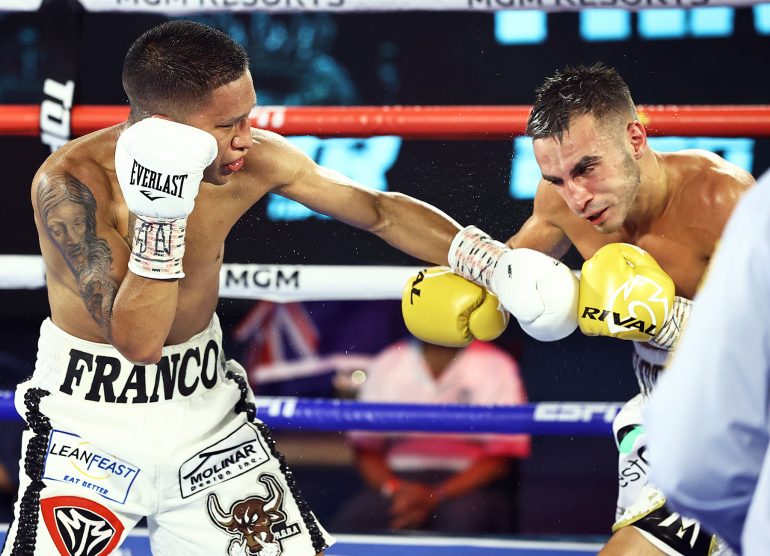 Joshua Franco was thought to be a safe enough opponent for Andrew Moloney to face back on June 23. Franco fit everything Moloney wanted going into the fight: A recognizable name with a winning record who did not have overwhelming power.

After 12 rounds and a convincing win over the Australia-based fighter, Franco went from a fighter who may have underachieved in previous fights to one of the best fighters at 115 pounds.

Franco believes bigger fights awaits against the world titleholders of the division, but he must take care of business again Saturday night.

The once-beaten Franco will face Moloney in a rematch at the MGM Grand Conference Center in Las Vegas, Nevada. The 12-round bout will precede the main event bout between WBO welterweight titleholder Terence Crawford and Kell Brook.

Franco (17-1-2, 8 knockouts), who is originally from San Antonio, Texas and now lives and trains in Riverside, California, overcame a slow start to defeat Moloney by unanimous decision. Franco punctuated the defeat by dropping Moloney in round 11 with a right cross to the head.

The 25-year-old does not think Moloney had an off night when they squared off almost five months ago. Instead, Franco believes he was the superior fighter thanks to the sparring he receives and the amount of knowledge trainer Robert Garcia provides to him.

“It was a tough fight, but I expected more from Moloney in the first fight,” Franco told The Ring Saturday afternoon over the phone. “He never hurt me or landed a punch that got my attention. Once I felt I received his best is when I stepped up my attack. I put the pressure on him. In the rematch, I’m going to start where I left off. He’s not going to handle the pressure for 12 rounds.”

Prior to the win over Moloney, Franco was best known for his trilogy against Oscar Negrete of Colombia. All of the fights against Negrete ended in split-decisions, with Franco winning one and draws in the other two bouts.

Franco suffered his only loss as a pro in March 2018. Franco had dropped Lucas Fernandez Leone in the opening round and was up on two scorecards before losing by knockout in round 9 under controversial circumstances. Franco was stunned by a punch from Fernandez Leone, prompting referee Jose Hiram Rivera to step in and stop the fight.

While no fighter likes to lose, Franco believes the loss against the Argentine was a blessing in disguise.

“That loss to Fernandez really motivated me,” said Franco, who is ranked No. 6 by The Ring at 115 pounds. “It really lit a fire in me. I know the fight was stopped (prematurely) and that was it. I’m grateful I was able to learn more about myself from that fight.”

Franco won a secondary world title belt with the win over Moloney. Even before the Moloney fight, Franco has eyed a possible fight with Roman ‘Chocolatito’ Gonzalez, who defended the WBA belt against Israel Gonzalez on October 23 in Mexico City.

While Franco has to deal with Moloney Saturday night, he hopes a fight against Gonzalez will take place next year.

“I really want that fight,” said Franco, who is promoted by Golden Boy Promotions. “I actually wanted that fight before I fought Moloney. I do want that WBA championship. Even fights against the other world champions is on my radar. I would like to fight (Ring Magazine and WBC titleholder’) Gallo’ (Juan Francisco) Estrada or (IBF titleholder Jerwin) Ancajas.

While his success in the ring may have been more than what some may have expected, Franco believes he is capable of facing and defeating any of the world titleholders in the division. That hunger is not going away anytime soon.

“I have a lot of love for the sport. I’m much more motivated and hungry to be the best. I love to fight and my family means a lot to me, including my brother (unbeaten Jesse Rodriguez).

“I have that fire in me and I’m not finished with what I’ve started.”