Shakur Stevenson and Toka Kahn Clary to clash on December 12 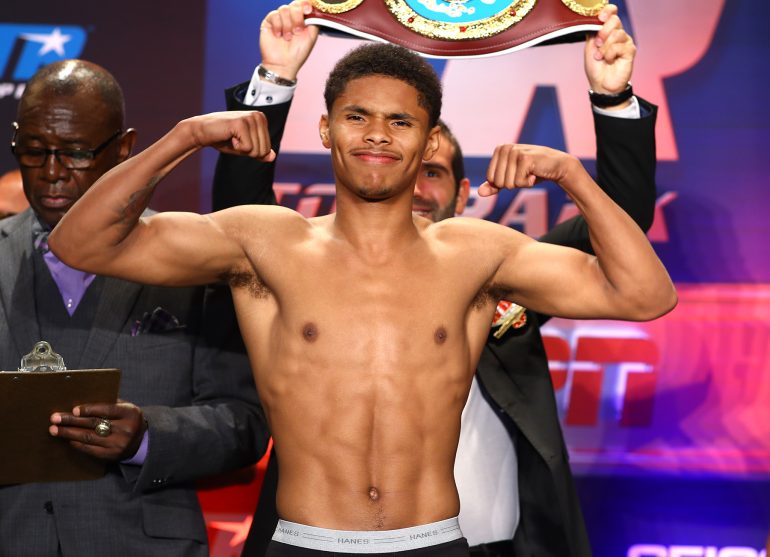 The 10-round bout will take place at the MGM Grand Conference Center, in Las Vegas, Nevada, where Top Rank has promoted shows since June due to the COVID-19 pandemic. ESPN will televise the fight live.

The Stevenson-Kahn Clary bout replaces the match-up between WBC junior lightweight titleholder Miguel Berchelt and mandatory challenger Oscar Valdez after Berchelt withdrew from the fight due to testing positive for COVID-19.

Stevenson (14-0, 8 knockouts), who was born and raised in Newark, New Jersey, most recently fought on June 9, dropping Puerto Rico’s Felix Caraballo twice en route to a knockout win in Round 6. The win over Caraballo marked Stevenson’s debut at 130 pounds.

About a month after the Caraballo fight, Stevenson decided to relinquish the WBO featherweight title he won by defeating Joet Gonzalez on October 26 of last year. The WBO placed the 23-year-old as the mandatory challenger to face junior lightweight titleholder Jamel Herring, which is standard practice for the sanctioning body for those fighters who relinquish one of its major titles to move up in weight.

Herring does have a fight lined up against former two-division titlist Carl Frampton early next year but Top Rank is hoping Stevenson will face the winner of the fight later in 2021.

Stevenson, who is managed by James Prince, has demonstrated more power and aggression in recent fights, stopping four of his last six opponents. The fight against Kahn Clary will mark Stevenson’s first as a pro against a southpaw.

Kahn Clary (28-2, 19 KOs), who is originally from Liberia and now resides in Providence, Rhode Island, stopped journeyman Jonathan Perez in Round 2 of his most recent bout on October 29. The 28-year-old has won his last three bouts since losing by unanimous decision to then-unbeaten Kid Galahad.

Two more fights are scheduled to appear on the ESPN telecast.

Verdejo, who is originally from Puerto Rico and is trained by Ismael Salas in Las Vegas, stopped previously-unbeaten Will Madera in the opening round of his most recent bout on July 16. Verdejo has won his last four bouts since suffering the only loss of his career at the hands of Antonio Lozada in March 2018.

Nakatani has not fought since losing a unanimous decision to Teofimo Lopez on July 19 of last year in an IBF lightweight elimination bout.

Super middleweight prospect Edgar Berlanga (15-0, 15 KOs), of New York City, who stopped Lanell Bellows in his most recent bout, on October 17, will face an opponent to be determined in a 10-round bout.

Francisco A. Salazar has written for RingTV since October of 2013 and has covered boxing in Southern California and abroad since 2000. Francisco also covers boxing for the Ventura County (California) Star newspaper. He can be reached by email at [email protected] or on Twitter @FSalazarBoxing.