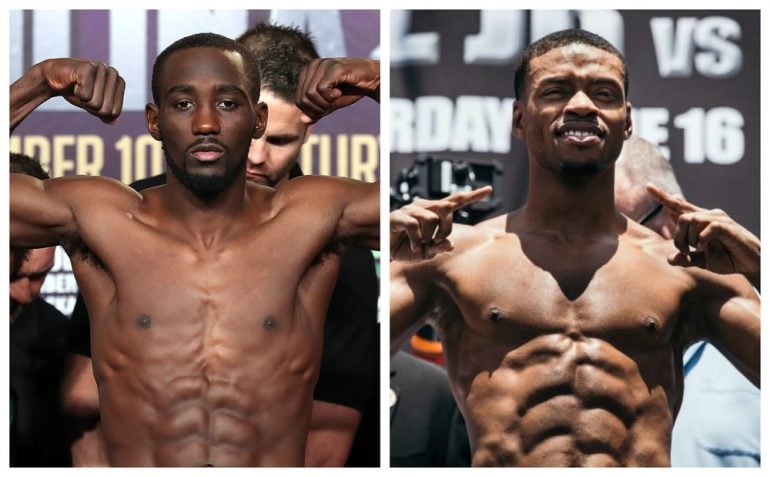 Terence Crawford believes it is a possibility that he and Errol Spence Jr. may never share a ring.

The undefeated welterweight titleholder made the comments Wednesday morning in a Zoom chat ahead of his title defense against former titlist Kell Brook on Saturday at the MGM Grand in Las Vegas.

In a previous interview, the unbeaten unified welterweight titleholder Spence told Forbes reporter Josh Katzowicz that he didn’t see the fight taking place if they don’t meet in 2021.

Crawford was asked if the fight “would go by the wayside.”

However, as he has stated in the past, Crawford doesn’t believe he needs to fight Spence for his legacy.

“I’ve accomplished so much in the sport of boxing that I [don’t] really need him,” said Crawford, who has won titles in three weight classes, including the undisputed junior welterweight championship.

While Crawford acknowledges that he would ultimately need to fight Spence to become an undisputed champion in two weight classes, he insists that his legacy would not be the one that takes the hit.

“If that fight don’t happen, I don’t feel like it [would hurt] my legacy,” he added. “It just hurts the legacy of the welterweight division.”

It is no secret that Crawford (36-0, 27 knockouts) has been looking for major fights, and he has also pondered yet another move north.

WBO junior middleweight titlist Patrick Teixeira stated in a previous interview with The Ring back in June that he wanted to face Crawford.

“Terence Crawford is one of the pound-for-pound best fighters in the world, and I think a fight with him would be terrific for boxing,” Teixeira said.

“Of course, he’s in a smaller weight class, so we would probably have to meet at 154, but I think it would be a big fight for the both of us, and one that hardcore fans are really going to enjoy.”

Brian “Bomac” McIntyre, Crawford’s head trainer, revealed in July that they were considering jumping up in weight for the Teixeira bout.

“If Terence decides that he wants to move up there (to fight Teixeira), he can automatically challenge for that title,” McIntyre told The Boxing Source.

When asked on the Zoom call if he could choose between Pacquiao, Spence, or unified junior welterweight champion Josh Taylor, Crawford chose the Filipino.

“I would pick Manny Pacquiao,” he revealed. “Josh Taylor still got unfinished business at 140.

Pacquiao also addresses his own futre in March on ANC’s Game Time, where the eight-division ruler was asked to narrow his selection to two opponents.

But Pacquiao left out Crawford.

With the best in the division seemingly unwilling to face Crawford, it appears likely that a move up in weight is closer than ever.