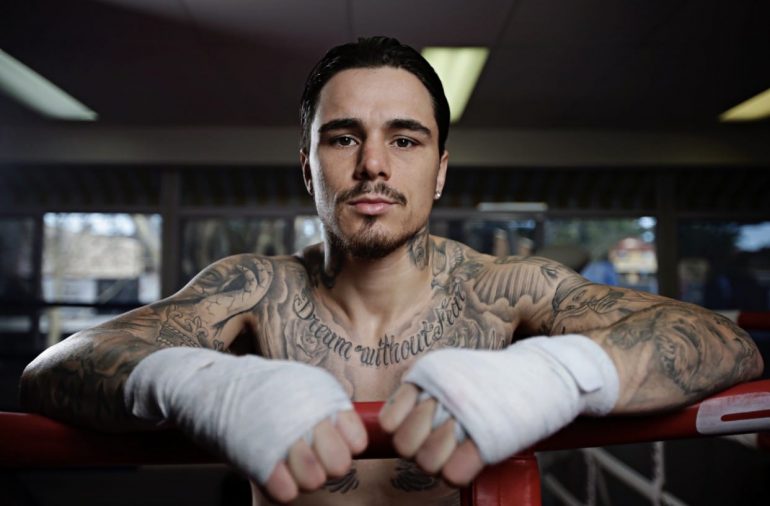 George Kambosos Jr. is proud of the work he did in defeating Lee Selby in his English backyard by split-decision on October 31. “Ferocious” has a right to be. He overcame some rather generous scoring by English judge Phil Edwards, and a two-minute eighth-round called early when Kambosos had Selby’s legs wobbling off a straight right.

By easily beating Selby (by all English and abroad accounts) in the IBF lightweight title eliminator, Kambosos (19-0, 10 knockouts) now falls into the new lottery that’s spreading across the 130-, 135- and 140-pound landscapes—“the Teofimo Lopez sweepstakes.”

Kambosos, 27, from Sydney, Australia, has a good sales pitch that may be better than anyone else. For one, he is now the IBF mandatory for Lopez, The Ring/IBF/WBO/WBC franchise 135-pound world champion. Secondly, Kambosos can offer Australia, where a Lopez-Kambosos fight would draw huge numbers, whether it was fought at Melbourne’s Marvel Stadium (56,347 capacity), Sydney’s ANZ Stadium (83,500) or Brisbane’s Suncorp Stadium (52,500), which hosted the Manny Pacquiao-Jeff Horn fight in July 2017.

Kambosos plans on being more than an Australian tour guide to boxing’s newest star, Lopez (16-0, 12 KOs).

“It just makes sense,” Kambosos said. “I have the No. 1 rating and we would have the kind of great audiences there in Australia. I’ll also tell you Lopez would get better treatment than I did in England.

“That’s kind of expected in England. I outboxed the superior boxer, and I showed how much of an intelligent boxer I am. Selby had six world title fights, and he hardly landed anything at all. After I beat him, he gave me an attitude. Maybe he didn’t expect to get outboxed in every aspect.

“I did it to Selby in his backyard, in front of his fans, before all of his mates. I want the Teofimo Lopez fight, and I know now I’ve earned it. I want to fight Teofimo—and I want him next.”

Peter Kahn, Kambosos’ manager, further elaborated on the possibility of a Lopez-Kambosos matchup in Australia, stating, “Both Top Rank and Lopez’s management (David McWater) have reached out, expressing their interest in promoting the world title fight in Australia. At the end of the day, this is prize fighting. With the almost-nonexistent COVID-19 cases in Australia, putting 50,000 fans in an outdoor stadium in March or April, is not only viable, but probable.

“Lopez stands to make significantly more money defending his title against George, who earned his mandatory by beating two former world champions consecutively. It’s a win-win for everyone involved. Top Rank would retain its ESPN rights in the territories that are important to them, and it would be a pay-per-view megahit in Australia. If we learned anything from the Pacquiao-Horn fight, the whole country of Australia will show up.”

Lopez, who is promoted by Top Rank, has Matchroom’s Devin Haney, who holds the WBC secondary lightweight belt, out there, and PBC terror Gervonta Davis, the WBA junior lightweight/lightweight title holder. Lopez himself has stated emphatically that he’s willing to take on anyone—and he is.

But this is boxing.

Would Top Rank be willing to risk its newest golden goose, Lopez, against PBC-controlled Davis or Matchroom-promoted Haney, instead of facing Kambosos in capacity-filled outdoor Australian stadiums?

Now, Top Rank and PBC worked smoothly together in putting on the Tyson Fury-Deontay Wilder rematch in February, so a megafight between a PBC fighter and a Top Rank fighter is not out of the realm of possibility.

But for Lopez’s first world title defense, a huge audience against the popular Australian Kambosos, rated No. 9 at 135 by The Ring, could be attractive.

That’s the point Kambosos is making.

“I’m telling you now, I will win this fight, like many people said Lopez couldn’t beat (Vasiliy) Lomachenko, I’m telling you I will beat Teofimo Lopez,” Kambosos said. “I know I have his number. I’m a student of the game, and I saw some of the good things I did against Selby, and how composed I was against him.

“It was the biggest moment of my career and I did it in enemy territory. As soon as the cameras were off, I was thoroughly relaxed. Now, the focus turns to Lopez. I think we can get it done in the next month or so. What better way to build Teofimo’s universal profile than to come down here and fight me?”

Kambosos did not rule out coming to the United States to fight Lopez.

“I’ll fight Teofimo anywhere, here, Las Vegas, New York, it doesn’t matter,” Kambosos said. “We would be looking at some time in March or April. A lot of people don’t think I can beat Teofimo Lopez. I’ll continue saying right now that I will beat him.”