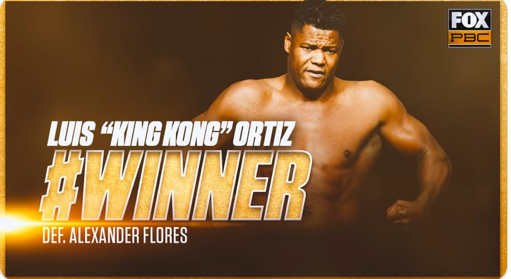 Luis Ortiz took some time off after his last outing, against Deontay Wilder, thought about his future, and decided he wanted to try and climb the high mountains again, and elevate himself to a title shot.

So, he gave word he wanted to scrap, and a bout against Alexander Flores got booked for the 41 year old Florida resident.

It was scheduled for ten rounds but Ortiz (241 pounds) didn’t need a whole one on Saturday night at the Microsoft Theater in Los Angeles, CA.  Flores went to the mat in round one, off a shot to the body, and he didn’t beat the count. The end came a mere 45 seconds into the first.

It was a clanging right, and it hit the “floating rib shot” according to analyst Lennox Lewis. On replay, it didn’t look like a killer shot, but only Flores (231 pounds on Friday) knows what the strike did to his body and brain. His face registered pain and the ref counted eight…nine..ten, and he didn’t manage to stand up.

The loser told Heidi Androl before the time of the finish was announced that his eye, his right eye was what felled him. He saw black, he told her, maybe when his head smashed into Ortiz’ arm after the body shot landed.

Ortiz, ranked No. 5 by RING, and No. 3 by both the WBC and WBA, won rounds against Deontay Wilder, in their November 23, 2019 clash. Then, in round seven, a one-two from Wilder splattered Ortiz’ marbles, and it was game over. They’d battled before, in March 2018, and on that occasion Wilder finished Ortiz in round ten.

Ortiz said before the clash he’d be keen to glove up with Andy Ruiz soon. 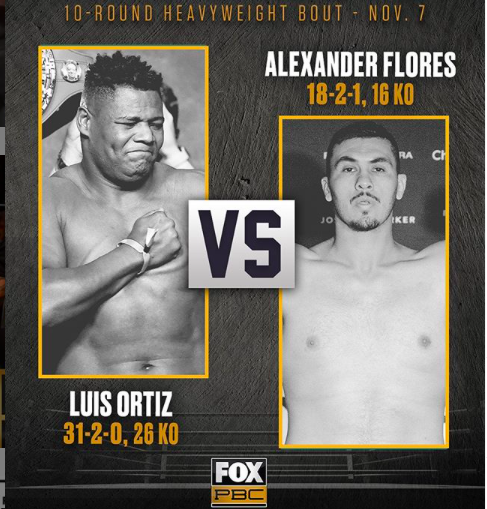 Before we got to the main event of the PBC on Fox presentation, politics intruded on boxing. Not for the first time, but this was in a more literal fashion than the sport is used to.

Beefing and negotiating and jockeying for position, among promoters and managers and platform providers and fighters, people are used to that. But literally, capital “P” politics, in the form of a speech by President elect Joseph Biden on Fox relegated a parcel of heavyweight bouts to FS2, a cable arm. Before the Frank Sanchez-Brian Howard bout, the speeches by VP-elect Kamala Harris and then Biden ended, so the fight feed went to Fox proper.

Sanchez (born in Cuba; now 16-0 with 12 KOs; 28 years old according to Boxrec) scored three knockdowns on Howard, who was out of his league.

In the third, watchers were impressed by an uppercut that set the table, and follow up flurrying sent Howard to the floor.

In round four, Sanchez (227 pounds at the weigh in) basted the loser, and the ref looked hard at stopping it on the third trip to the canvas. He didn’t, so we saw more basting.

Howard (210 pounds on Friday) kept trying, though, he ripped a left hook, to signal he wasn’t going to go that way. But more combos piled up, and the ref, Jerry Cantu, stepped in, and halted the tango. A right hand sent Howard (15-4) back into the ropes, he would have gone through loose ropes…and that was all that was written.

The Las Vegas resident Sanchez has quick hands, places punches well…and when he’s in an aggressive mode, gives himself to win bouts against solid competitors.

For the record, for what it’s worth, Howard is said to be 40 years old, but looks five years younger than Sanchez.

New York native Michael Coffie went to 11-0 when he dug in with a left hook to the body, and sent Joey Abell (now 35-11) to the mat in round two. 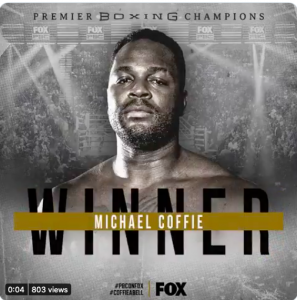 Joey dropped, grimacing, rolled about, made it to his feet near ten…but it was too late. His body language told the ref he was in no shape to continue. Also, he indicated that his right arm was hurting him too much.

You saw why on replay; a left hook thudded on the 267 pounder Coffie, backed against the ropes. But the bicep rolled up on the 250 pound loser, who backed up, in pain, leaving him open to the body shot.

Coffie looks like a top 25 heavyweight to me. He is 34 years old, so we will see if they try to fast track him more so from here on in. Abell is 39 years old, and has been stopped 9 times in his 11 losses. The Minnesota resident had come in on a one-fight win streak.

Negron is a record builder sort, who has lost hand speed noticeably in the last few years, and this win could help usher him to a better payday against someone heavily favored to beat him.