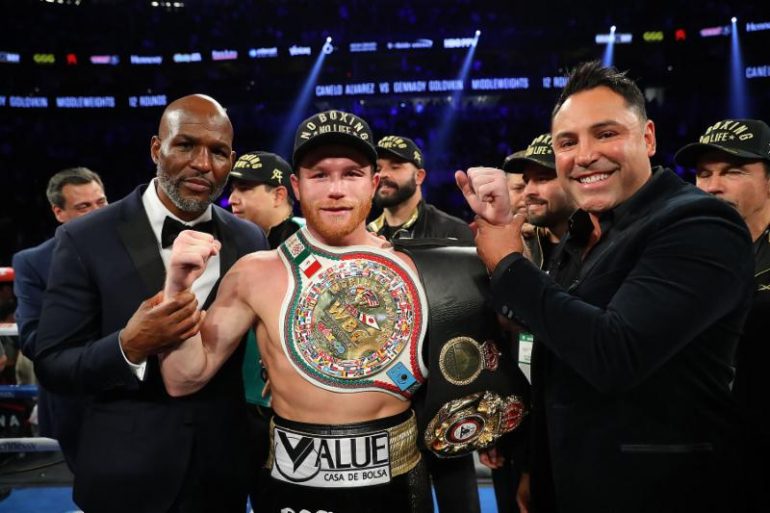 When Canelo Alvarez signed a blockbuster $365 million deal in late 2018 that extended his promotional contract with longtime promoter Golden Boy and granted his next 11 fights over five years to upstart sports streaming service DAZN, it was the richest contract for a pro athlete at the time. Now, barely two years later — and still with eight fights and $280 million to go — it’s over.

Alvarez, boxing’s biggest star and to many the No. 1 fighter in the world pound-for-pound, on Friday became a broadcast and promotional free agent when the sides reached a settlement of a lawsuit for breach of contract that Alvarez filed against DAZN, Golden Boy Promotions and Golden Boy chairman and CEO Oscar De La Hoya in September.

“In my role as a manager and coach of Saul ‘Canelo’ Alvarez, I allow myself to communicate to the boxing community and to all our fans, that starting today, November 6th, ‘Canelo’ becomes a free agent, so we are ready to continue his boxing career,” Reynoso wrote. “All this time we have been working hard in the gym with a lot of responsibility and discipline, to be in great physical shape and ready to fight this year and it will be!”

Alvarez, who has won major world title belts in three weight divisions from junior middleweight to light heavyweight, has not boxed since last November, when he moved up two divisions and knocked out Sergey Kovalev in the 11th round to win a light heavyweight world title, which he vacated soon after.

Under his landmark deal, Alvarez fought just three times, knocking out Rocky Fielding in the third round to win a secondary super middleweight belt in December 2018, returning to middleweight to outpoint Daniel Jacobs in a title unification bout and then scoring a highlight-reel knockout of Kovalev a year ago. 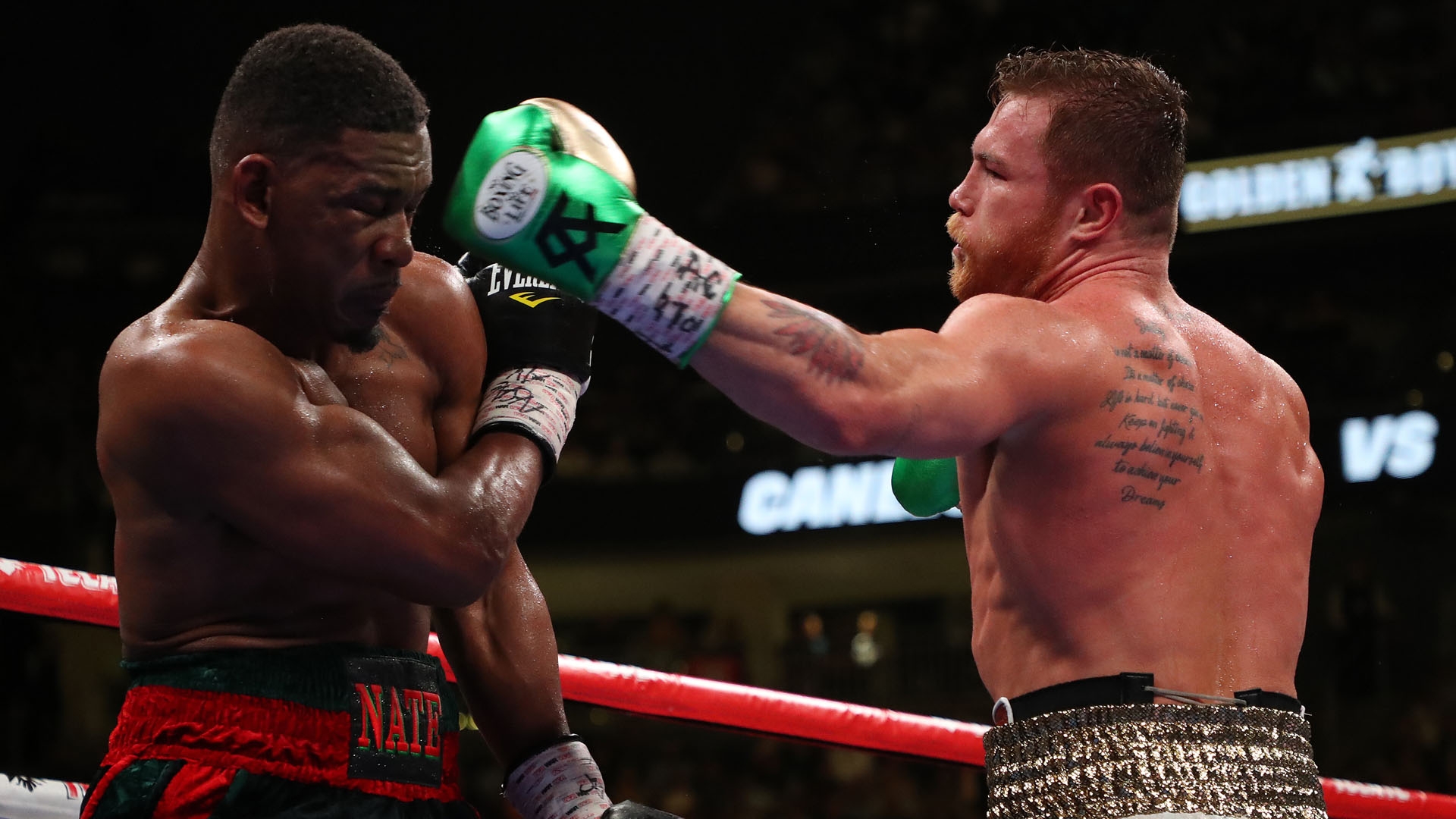 But since then his relationship with both Golden Boy and DAZN has been fractured over scheduling his next fight and arguments over his purse and who his opponent would be.

He was supposed to fight super middleweight titlist Billy Joe Saunders in May but that fight, on the verge of being announced, was eventually cancelled due to the coronavirus pandemic.

The bout was supposed to take place around the same time that middleweight world titlist Gennadiy Golovkin, who is signed to his own exclusive deal with DAZN, would face mandatory challenger Kamil Szeremeta as a prelude to the third fight between Alvarez and Golovkin that DAZN so badly wanted. Alvarez and GGG fought to a very controversial draw in their first fight in 2017 and Alvarez won a disputed majority decision in their 2018 rematch.

With Alvarez anxious to return to the ring, and willing to fight without spectators and the millions in ticket money that would go with it because of the pandemic, he, Golden Boy and DAZN tried to work out his next fight. But DAZN was unwilling to approve a Saunders fight or one with Ring super middleweight champion Callum Smith for $35 million. DAZN, which was supposed to pay a license fee of $40 million to Golden Boy with $35 million of it going to Alvarez, would only do the fight if Alvarez took a dramatic cut in pay, according to multiple sources.

Unable to agree on an opponent and with DAZN unwilling to pay the full amount of what he would be owed under his contact, Alvarez sued DAZN, Golden Boy and De La Hoya for breach of contract and sought at least $280 million, the remainder of what he was owed on his deal. According to the lawsuit, De La Hoya would be personally liable for the money.

After weeks of the camps trying to settle their differences through mediation in an effort to get Alvarez back in the ring, the talks failed.

“It is true that the lawsuit has been resolved. Paperwork will be filed with the courts shortly,” Gregory M. Smith, Alvarez’s attorney, told The Ring. “Canelo will be a complete free agent and will have no contracts with any network or promoter. He is glad to have this matter behind him and excited to control the rest of his career. Eddy Reynoso will be announcing Canelo’s next event soon.”

Under their settlement, Alvarez becomes a free agent while Golden Boy will remain tied to DAZN, which will continue to serve as the primary broadcast outlet for its fight cards. DAZN will also retain the rights to the vast Golden Boy library.

“The lawsuit was resolved to everyone’s satisfaction, and we wish Canelo the best going forward,” De La Hoya said in a statement given to The Ring, which De La Hoya owns. “In strong partnership with DAZN, we will continue showcasing our wide array of talent, including rising superstars like Ryan Garcia, Jaime Munguia and Vergil Ortiz Jr., all of whom have the talent and potential to become the next biggest star in our sport.”

A DAZN official told The Ring that the settlement was “a clean break, hands up and walk away.”

“The matter has been resolved to the satisfaction of all parties,” the DAZN official said, while also wishing Canelo the best in his future endeavors. 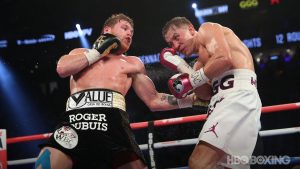 It remains to be seen where Alvarez will land next but he has been training and wants to fight again before the end of the year. One landing spot could be with Premier Boxing Champions, which could offer him an opponent such as unbeaten super middleweight world titlist Caleb Plant.

PBC has broadcast deal with both Fox and Showtime. Alvarez, a bankable pay-per-view attraction, has history with Showtime.

He fought on Showtime or Showtime PPV in five consecutive fights from 2012 to 2014, including his one defeat, a junior middleweight title mega fight with Floyd Mayweather in 2013.

With Alvarez leaving DAZN it does call into question what is next for Golovkin, whose value to the service was largely based on a third fight with Alvarez.

Golovkin (40-1-1, 35 KOs) signed his a three-year, six-fight contract DAZN in March 2019 mainly in order to get a third crack at Alvarez. Since signing with DAZN, Golovkin has had two fairly low-profile fights, a fourth-round knockout of Steve Rolls in June 2019 and a hard-fought decision win over Sergiy Derevyanchenko for a vacant middleweight world title in October 2019. Without Alvarez fighting on the same platform, however, it remains to be seen what sort of major fight Golovkin could have on DAZN.