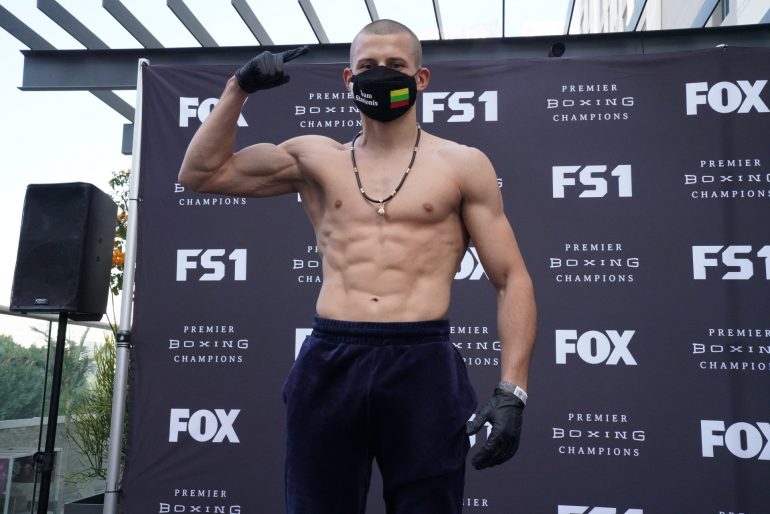 Eimantas Stanionis scored his most significant victory to date as he systematically broke down Justin DeLoach Wednesday evening in a PBC on FS1 main event at the Microsoft Theater in Los Angeles.

The 2016 Lithuanian Olympian scored two knockdowns of a brave DeLoach en route to a ninth-round stoppage in the welterweight bout.

The victory marked the third consecutive knockout win for Stanionis, who fought for the first time since scoring a third-round KO of Julio Cesar Sanchez last December in Canada.

DeLoach, who hails from Augusta, Georgia, dropped his fourth bout in his last six ring appearances.

From the onset, Stanionis was in firm command.

Stanionis buckled DeLoach’s knees with a clean left hook to the head in the opening round.

By the sixth round, Stanionis had begun to break down DeLoach both mentally and physically. A counter right hand over the top clipped DeLoach and backed him up.

With less than a minute in the round, Stanionis targeted the body with increasing regularity, landing consistently behind the jab.

Stanionis’ head trainer Freddie Roach told his pupil to punch more with his right hand before round seven.

And Stanionis followed the instructions to the T as DeLoach was in serious trouble.

Staninonis (11-0, 8 knockouts), 26, who trains in Oxnard, California, drilled DeLoach with a textbook one-two combination, an impactful jab, followed by a solid right cross. As DeLoach’s knees buckled, Stanionis landed with a left hook to the head that sent him stumbling into the ropes.

Stanionis then immediately went on the attack firing all cylinders and landed with a hard left uppercut as DeLoach tried to hold on.

Stanionis saw the ninth round for the first time in his pro career, which also happens to be when he closed the show.

For the fifth time in his last six contests, DeLoach tasted the canvas. It all occurred when Stanionis rocked him with a barrage of hard punches before a left hook to the body sent him down.

DeLoach beat the count, but Stanionis sent him crashing and tumbling to the floor once more from a series of overhand rights and left hooks.

Stanionis went right back on the attack, landing with left hook after left hook, with each shot knocking DeLoach’s head. But referee Ray Corona had finally seen enough and waved off the fight at 2:53 of round nine.