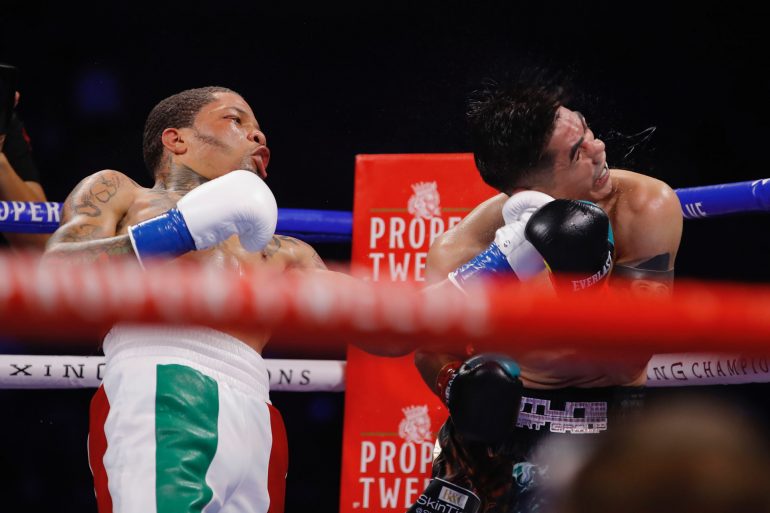 Davis produced the Knockout of the Year 2020 on Leo Santa Cruz. Photo from Showtime Boxing/ Twitter
31
Oct
by Dan Rafael

Gervonta “Tank” Davis’ goal on Saturday night was to put on a  “great performance” to help him become a pay-per-view star. After scoring a sensational one-punch knockout in the sixth round of the durable Leo Santa Cruz it would be hard to argue Davis hadn’t accomplished his mission.

The fight was the main event of a Premier Boxing Champions card on Showtime PPV at the Alamodome in San Antonio, where a socially distanced but fired up crowd of 9,024 was allowed to attend a major championship-level card for the first time since the coronavirus pandemic began earlier this year.

Davis and Santa Cruz, both headlining their first pay-per-view card, made it worth their while with an exciting brawl, one in which Santa Cruz was ultimately lured into a firefight with a bigger puncher and paid the price.

“The uppercut wasn’t the key coming into the fight, but I adapted to what he was bringing,” Davis said. “I knew he was taller and crouching down and moving forward. Once he moved forward, I tried to jab and make him run into the shot. In the first couple of rounds I wasn’t really warmed up. I could tell that he was trying to counter off of me, so I just adapted to what he was doing.

“He was right there for it. He punches, but he doesn’t try to get out of the way. There was nowhere for him to go on that knockout because I got him into the corner.”

Davis and Santa Cruz opened with a brisk pace and went right after each other, and never let up.

Davis got going by landing a left uppercut  in the opening seconds but Santa Cruz also was busy with his punches. Something got through from Davis because midway through the round Santa Cruz was cut on the bridge of his nose. Late in the round Davis found himself on the mat because their feet got tangled and referee Rafael Ramos ruled it a slip.

Davis shoved Santa Cruz to the canvas in the second round and when he was warned by Ramos, Davis complained that he had been held behind the head. When the fight resumed the underdog Santa Cruz, who has won titles in four divisions (bantamweight, junior featherweight, featherweight and junior lightweight) and still holds a featherweight title, unloaded combinations to close a strong round.

As fast-paced as the fight was from the start it picked up in the fourth round. Davis landed a hard left hook and they spent most of the rest of the round rumbling at close quarters. Davis landed to the body, as he did often, and Santa Cruz fired shots down the middle to the welcome sound of a crowd roaring for the first time in months since the coronavirus pandemic began and limited large gatherings.

While some thought that Santa Cruz might move a bit more than usual against the powerful Davis he didn’t at all. He stood in the pocket with Davis throughout the fight, which turned out to be his downfall in the sixth round.

Santa Cruz had raised swelling under Davis’ right eye and they were engaged in a pitched battle on the inside blasting away at each other when Davis dipped down and unleashed a gargantuan left uppercut that caught Santa Cruz flush and knocked him out cold.

Santa Cruz hit his head on the corner pad as he fell to the mat and came to rest partially under the bottom ring rope. Ramos did not bother to count, waving off the fight at 2 minutes, 40 seconds. Santa Cruz was down for a few minutes before being able to get to his feet and mustering a sheepish smile.

Davis led 48-47 on all three judges’ scorecards at the time of the knockout.

“Leo is a tough warrior and a strong Mexican fighter,” Davis said. “He came ready for me. I was just the better fighter tonight.”

To nobody’s surprise Santa Cruz, known throughout his career for volume punching, threw and landed more punches but Davis was quite clearly the heavier puncher. According to CompuBox statistics, Davis landed 84 of 227 punches (37 percent) and Santa Cruz connected with 97 of 390 (25 percent).

“We didn’t get the win, but I’m OK,” said Santa Cruz, who was taken to the hospital to be examined as a precaution.

Although the bout was contracted at the junior lightweight limit of 130 pounds, Davis’ 135-pound lightweight belt was also on the line, even if it was of the secondary variety. Still, it is rare for there to be titles on the line in two divisions but it has happened, notably for Sugar Ray Leonard and Donny Lalonde, who met for titles at light heavyweight and super middleweight in 1988 and in the 2014 rematch between Floyd Mayweather – Davis’ promoter — and Marcos Maidana, which had belts at stake at both junior middleweight and welterweight.

Regardless of belts, however, Davis (24-0, 23 KOs), a 25-year-old southpaw from Baltimore, who previously had two junior lightweight title reigns, turned in a star-making performance against

Santa Cruz (37-2-1, 19 KOs), 32, a Los Angeles-based Mexico native. Santa Cruz had only been knocked down once previously in his 14-year career, and that was a long time ago when he was dropped by a rabbit punch that forced him to take a knee in his 11th pro fight, a six-round decision win over Robert Da Luz in August 2009.

“I want to maintain both belts,” Davis said, without specifying which division he would fight in next. “Whatever decision me and my team comes up with, we’ll go with it. I’m not ducking or dodging anybody.”

There are some major names at lightweight, most notably unified world champion Teofimo  Lopez, who is The Ring champion, as well as titlist Devin Haney, Ryan Garcia and former champion Vasiliy Lomachenko.

But Davis did not want to call any of them out, although he made it clear he is ready for the best.

“I’m a pay-per-view star. Everybody knows I’m No. 1 and I showed it tonight,” Davis said. “I’m going to continue to show people all over the world that I’m the best. I don’t have to call anybody else out. I’m the top dog. Just line them up and I’ll knock them out.”