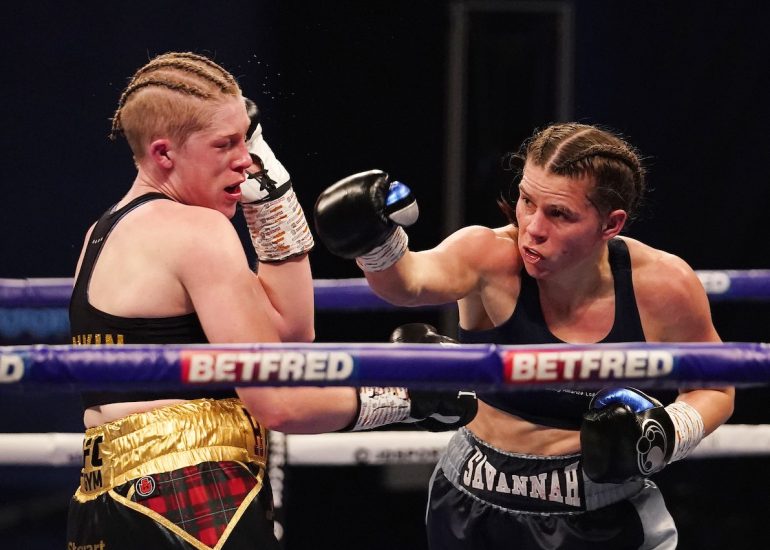 Savannah Marshall wasted no time calling out Claressa Shields after becoming the WBO middleweight champion in her ninth fight.

She defeated courageous Scot Hannah Rankin in seven rounds in a dazzling performance that saw her look world class at the Wembley Arena in London on Saturday.

“For months I’ve watched all the other Matchroom girls grab their chances and I’ve wondered when my chance would come and tonight it did and I took it with both hands,” said Marshall in her post-fight interview with Sky Sports in the U.K. “The only reason Claressa has got the belt is because she got there before me. She doesn’t want none of me.”

Marshall found a home for some excellent left hooks in Round 3 and was looking controlled, relaxed and fluid in equal measure throughout and she had Rankin ready to go early in the seventh. It started with a big counter right hand and she didn’t let the Scot off the hook. Instead, she set about her victim with both hands and there was no respite for the Glaswegian who dropped to the floor. Referee Phil Edwards elected to stop the bout after Rankin wearily got to her feet.

This was the night the Peter Fury-trained boxer put it all together and there’s now talk of Savannah Marshall getting a fight with Shields, Marshall is 9-0.

Fury said: “I know my fighter inside out and I’m very proud of what she’s achieved this evening.”

“This means the world to me,” said the jubilant Irishman. “I knew it was going to be tough but now I’m the European champion. I want Mairis Briedis next. I’m the toughest man in Europe so I want Briedis, the toughest cruiserweight in the world next.”

The European crown had been vacated by former champion Lawrence Okolie and Daniel Van de Wiele’s even scorecard (114-114) was over-ruled by Mark Lyson (116-113) and Jan Christensen (116-112). McCarthy was a worthy victor.

After an interesting opener in which both men enjoyed success – with Laggoune landing several decent right hands – the bout never really got untracked.

The visitor probably took several early rounds and it was a good fight without being thrilling.

In Round 6, Laggoune was slowed after sustaining damage to his left eye. He survived a doctor’s inspection but McCarthy was now in the ascendency and working over the Belgian’s body.

The Irishman landed an eye-catching left hand in the eighth as the pace cooled but Laggoune was still in there pitching in Round 10, landing more long right hands. McCarthy was a little lackadaisical with his guard when he could have shut up shop and coasted over the finish line.

Meanwhile, debutant Ramla Ali pumped out a quality jab and landed clean blows with big shots to the head and body on her way to a convincing win over Eva Hubmayer, who is now 1-1. It went the full 10 but Hubmayer was either fortunate or unfortunate to hear the final bell depending on your perspective.