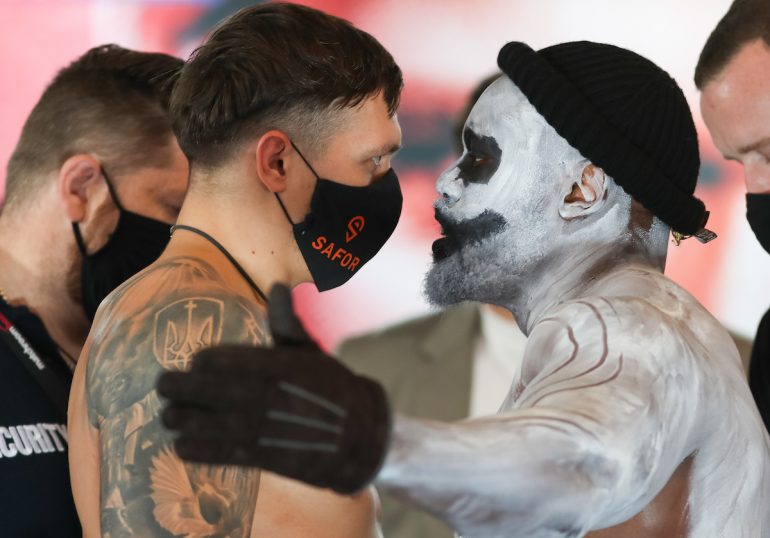 There were no significant fireworks at the Usyk-Chisora weigh-in on Friday, although the home fighter did win the unofficial award for best Halloween costume.

Derek Chisora weighed in at 255.5 pounds for his eagerly anticipated heavyweight clash with former undisputed cruiserweight champion Aleksandr Usyk, which takes place at the Wembley Arena in London on Saturday. Usyk was far lighter at 217.25 pounds.

Chisora approached the stage with his entire upper-half painted white, complete with darkened eyes and the word – and nickname – “WAR” written across his chest. Usyk, unlike his opponent, donned a facemask, which is probably just as well because Chisora strutted across the stage and got right in his face, arms stretched to the side.

“I told him that I’m bringing the African Mandingo style,” said the enigmatic Chisora when interviewed by Sky Sports in the U.K. “I’m gonna rough and tough him. I’m going to war – African style.

“Either we knock him out or he’s gonna quit on his stool.”

Usyk, who debuted as a heavyweight last October, when he stopped American Chazz Witherspoon in seven rounds, appeared completely unfazed.

“I’m in exactly the shape I wanted to be,” said Usyk, through co-promoter and translator Alex Krassyuk. “I could have been [a bit heavier, but weight won’t be a factor.]

“It’s important to make a good statement Saturday night to avoid any hesitations of my opponents in the future. A lot of people still don’t believe in me. On Saturday night I will make my statement at heavyweight, but people will still say things. That’s not my problem.”

Usyk-Chisora plus undercard action will be televised by DAZN in the U.S. and by Sky Box Office in the U.K.