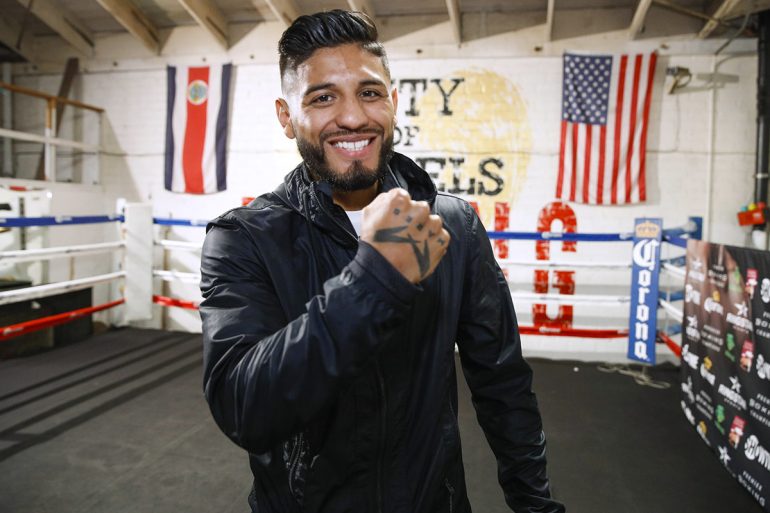 As he puts on his headset Saturday night, Abner Mares may take a moment to look around, inhale and reflect, before he calls the Gervonta Davis-Leo Santa Cruz WBA junior lightweight/WBA lightweight title fight from the Alamodome, in San Antonio, Texas.

This is all still unique to the new Showtime color analyst. It’s been a winding odyssey that has led the former three-division titlist here, calling Showtime Pay-Per-View boxing telecasts.

Curious as to who it was, Mares looked down at his screen to see it was Stephen Espinoza, Showtime’s president of sports and event programming.

Mares picked up the random call and Espinoza just blurted it out: “Hey Abner, would you be willing to fly out for a Showtime fight and be the color commentator for us?”

“Sure, when?” Mares replied.

“Ok,” Mares said. “There was just one little detail, Stephen.”

“I have pink hair,” Mares told him.

“It doesn’t matter with your personality,” Espinoza said, trying to hold in the laughter, “just come in and be yourself.”

So, Mares came splashed with some tint on what could be a blossoming career as a color commentator. Showtime flew the 33-year-old father of two to New York on July 30, then they took a two-hour drive to the Mohegan Sun Casino, in Uncasville, Connecticut.

By the time Mares arrived, he had not heard anything about the swirling controversy that had been going in the days preceding his first Showtime call. He didn’t know how he got the job. Mares even asked for Paulie Malignaggi, Showtime’s color analyst since September 2012. 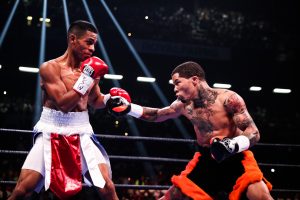 Gervonta Davis was supposed to Abner Mares in 2019, before a detached retina in Mares’ right eye injured in sparring cancelled the fight.

“What happened to Paulie, did he get sick?” Mares inquired.

Mares was told to check his social media. The very morning Mares flew out to New York, news spread that Malignaggi would not finish the remainder of his Showtime contract due to what were deemed as inappropriate comments made on a YouTube channel in April.

When Showtime management asked Malignaggi, 39, to apologize for what he said, the former junior welterweight and welterweight champion did not think there was any need for an apology. That’s when Showtime decided to eliminate the Brooklynite from the broadcast team.

That’s also the tornado in which Mares landed. All hell was breaking loose around him.

“I saw what was going on and I was like, ‘Oh f__k,’ and I’m a straight shooter; I’m a stand-up guy and I asked for Paulie’s new number,” Mares recalled. “I really didn’t know what happened. I had to call Paulie, I had to call my good friend.

“I called and said, ‘Yo Paulie, I just wanted to let you know that I’m doing this Showtime show, and as a friend that are to me, I just heard the news and I’m sorry.’

“Paulie said, ‘Abner, you don’t have to be sorry, man. Just go out there and kill it. Go f__king kill it!’ He said, “Just go do your thing and I’m grateful for your call.’ I’m happy I did it. I just wanted to make sure I was right with Paulie. I like to be cool with everybody, and Paulie was always good to me.”

In 2019, Mares who was supposed to fight Davis. But when Mares suffered a detached retina in his right eye during a sparring session, which required surgery in January 2019, the fight was called off.

The other connection to this fight Saturday night is that Mares has not fought since June 2018, when he lost the WBA featherweight belt to Santa Cruz, who’s beaten Mares twice.

“I can’t wait for this fight,” Mares said. “I’m just a slug compared to Al and Mauro. Both of them have made me feel comfortable. I’ll admit I was more nervous in my first (Showtime) fight than when I fought.

“That’s because I’m a fighter. That’s what I’m used to. Now, it’s time to do my homework on these fighters, and that’s the challenge. It’s like I’m back in school, and I didn’t like school (laughs). I was told to be myself and just relax.”

Mares knows the comparisons to Malignaggi will be inevitable. Whereas “The Magic Man” had no issues with speaking his mind, Mares is more measured, more nuanced in his approach.

“I have to be who I am, and someone with great knowledge of this business told me recently at the Charlo fights not to be a perfectionist, just be myself,” Mares said. “Paulie had his style. I have mine. I think during the Charlo fights, I put a lot of pressure on myself and I was trying to be someone else, doing something different. After hearing that, I went back to being myself.

“I’m better. I’m more relaxed. I’m reaching a comfort zone, and what’s helped a lot is talking to Al and Mo. Everyone at Showtime has been so easy to work with. They’ve been very helpful.”

Mares stressed he holds no bias, despite losing twice to Santa Cruz. He actually likes the 32-year-old from Rosemead, California.

“Leo is a really good guy, and he’s from a great family, they’re great people and his father is a courageous man,” Mares said. “But the Tank Davis I see now, the Tank Davis I see after the pandemic, I see a different Tank Davis. I see a well-trained athlete and I see him focused and dedicated.

“Before the pandemic, Tank was winning fights based on natural ability. He had no conditioning. He would train here and there. We see a monster now. He has his mind set on being the best. Leo’s only chance is if Tank misses weight, and I don’t see that. Tank is a better fighter than Leo Santa Cruz. It’s going to be a good, competitive fight and I get to see it from the best place in the house—at ringside.”