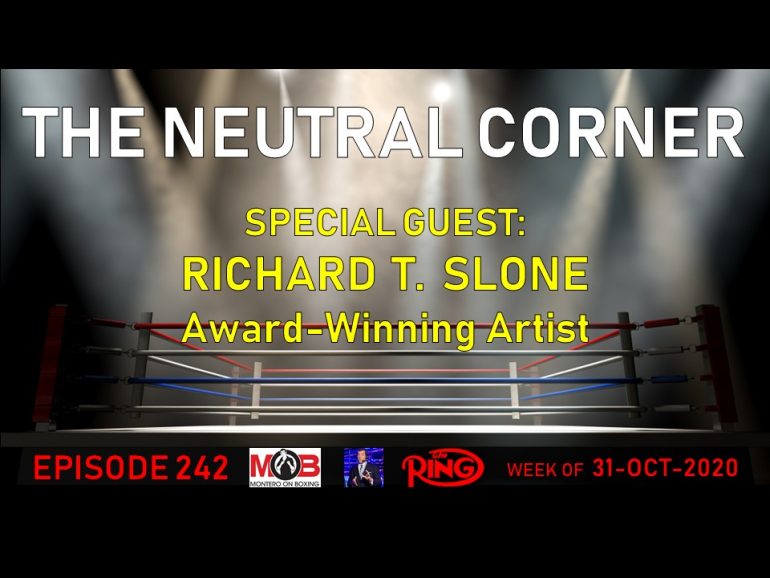 On episode 242 of The Neutral Corner boxing podcast, host Michael Montero was joined by artist Richard T. Slone. Although most boxing aficionados know Mr. Slone for his award-winning artwork (including his stunning cover piece for the recent Manny Pacquiao special edition of The Ring magazine), his love for the Sweet Science began long before he ever picked up a paint bush.

“My background in boxing goes all the way back to my childhood in England,” he told The Ring. “I boxed in the amateurs. At 16 years old I met Joe Frazier in London. We hit it off and he told me that when I finished school, if I wanted to come to America he’d give me a place to stay and teach me how fight at a higher level. That was the beginning of a ride that I’m still enjoying to this day.”

Slone went from working with the former heavyweight champion in Philadelphia to eventually living with Emanuel Steward in Detroit, working at the famed Kronk Gym. He would go on to be a member of Lennox Lewis’ team for years.

“Emanuel and I were great friends,” he said. “When I realized that I wasn’t going to be a world champion and my passion to fight dwindled, I began to learn the business side of boxing. Manny took me in as a helper at Kronk. I worked my way up to Vice President of the gym. I miss him tremendously.”

Slone told Montero of his humble beginnings in England, where his father worked as a blacksmith. His grandfather was a boxer, and his family has roots in the bareknuckle fight scene. One day his passion for the sport would bring him to the art world. But there was no fancy training, Slone taught himself how to paint.

“I’ve done some tutorials online, looked at other artists to study different techniques, but I’m completely self-taught. I’ve always had a passion for art and I’ve never strayed from boxing. I was told that it was impossible to make a living as a boxing artist, but I thought I could change that. I feel like I’ve given my life to boxing and it’s been good to me.”

Richard’s fight art has been sought out by fighters and promoters alike for years. His pieces have been used for numerous fight promotions, including recent blockbusters like Canelo-Golovkin and Mayweather-Pacquiao. His first Ring Magazine cover was back in 1996.

When it comes to his process, he keeps it strictly old school. That means very little sharing on social media, no time lapse videos or public painting.

“I think creating art is a very personal and private thing. You’re kind of baring your soul. I have my own habits that I’ve created over the years. I like to smoke a cigar while I paint and sip a little whiskey, and I have my own playlist of music. Very few people have ever stepped into my studio.”

Last Friday in Mexico City, Julio Cesar Martinez defending his flyweight title with a TKO 2 win, while Roman Gonzalez and Juan Francisco Estrada defended their junior bantamweight titles with exciting wins, setting up a possible rematch in early 2021. Promoter Eddie Hearn says he is targeting the Dignity Health Sports Park near Los Angeles as the possible venue, hopefully with fans in attendance. Estrada’s win over Carlos Cuadras, a rematch, was a Fight of the Year contender that headlined the DAZN card.

Over on Showtime, Sergey Lipinets and Custio Clayton fought to a draw in the PBC main event. Junior lightweight prospect Xavier Martinez survived two knockdowns to score his most impressive win to date, and junior welterweight Subriel Matias got back in the win column.

Tim from San Diego expects Inoue (a 1-5 betting favorite) to beat Moloney this Saturday but feels the oddsmakers are selling the Aussie a bit too short. “Given the way things have been going with COVID and the lockdowns, the way some fighters have looked coming back, maybe the fight will last longer,” he said. “I do expect Inoue to fold him in half by 10 rounds, but it’s going to take longer than the bookmakers are saying.”