Leo Santa Cruz: I want to fight the best and who better to fight than Gervonta Davis? 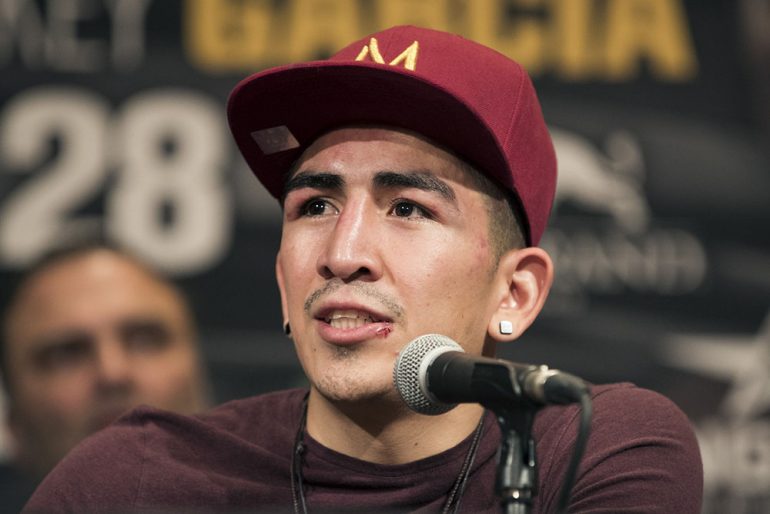 In his 14 years as a professional prizefighter Leo Santa Cruz has won world titles in four weight classes, made millions of dollars and been a fan favorite thanks to his humble demeanor outside the ring and typically entertaining fights inside it.

But despite all of his accomplishments, Santa Cruz has still heard and read criticism of what some perceive as his having faced light competition more often than not in recent years.

Santa Cruz, a proud man, admits it bothers him and he wants to change that narrative.

He said that is one of the main reasons why he went to his manager, Al Haymon of Premier Boxing Champions, and specifically asked for a fight with Gervonta Davis, a dangerous and explosive, bigger, younger man.

“People were saying that I’m afraid to fight big names, big opponents,” Santa Cruz told The Ring. “Who better than fight Gervonta Davis to prove them wrong? I’m here to fight the best and now I’m showing it by fighting him. I asked for this fight for a reason and I’m gonna go out there and try to prove them wrong.”

Santa Cruz and Davis will meet on Saturday night (Showtime PPV, 9 p.m. ET/6 p.m. PT) at the Alamodome in San Antonio in the main event of the first championship-level card since the coronavirus pandemic earlier this year that will allow at least some spectators to be on hand. The bout is contracted at the junior lightweight limit of 130 pounds with Santa Cruz’s junior lightweight world title at stake as well as Davis’ secondary lightweight belt.

More than the hardware at stake, Santa Cruz, who also still holds a featherweight title, believes he will earn respect for putting himself in harm’s way against a big favorite in Baltimore’s Davis (23-0, 22 KOs).

“I think this is my biggest fight against Gervonta Davis. He’s a great fighter, a rising superstar,” said Santa Cruz, adding that he has sparred regularly with welterweights to prepare. “He’s only 25 years old, has a 95-percent knockout rate, so I think it’s a very dangerous fight, the hardest of my career. But this is the fight we want. We want to fight the best, beat the best and sky’s the limit.

“He has great timing, great power; he’s one of the best out there. He’s the one everyone wants to fight because he’s a great fighter and everybody wants to prove themselves against him because they see that next superstar.”

But it’s not like Santa Cruz (37-1-1, 19 KOs), who has won world titles at bantamweight, junior featherweight, featherweight and junior lightweight, has faced a slate of nobodies. He is best known for going 3-1 against standouts Carl Frampton, a two-division titlist, and fellow Mexican/Los Angeles rival Abner Mares, who has won titles in three divisions.

In 2015, Santa Cruz won a majority decision over Mares in a hard-fought battle before a packed house at Staples Center in Los Angeles to claim a vacant featherweight title.

After suffering his only career defeat in a razor-close and action-packed battle with Frampton that cost him that belt in July 2016, he turned the tables in a majority decision win in the rematch to reclaim the title six months later. And when he met Mares in a rematch in June 2018, again at raucous Staples Center, Santa Cruz won a clear-cut unanimous decision. 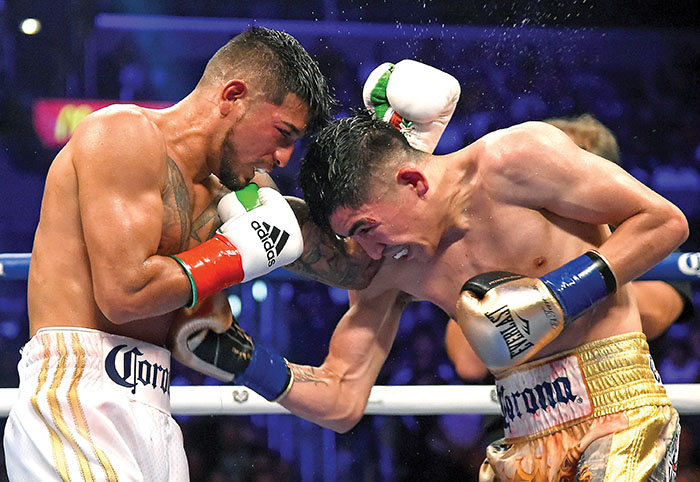 In Santa Cruz’s two fights since, however, he took heat for a lack of competition in one-sided decisions over Rafael Rivera in defense of his featherweight title and Miguel Flores for a vacant junior lightweight title last November.

Santa Cruz said he had hoped to meet undefeated featherweight titlist Gary Russell Jr., either in a unification fight or at junior lightweight, but he was rebuffed by Russell. Santa Cruz said he then decided to go after Davis.

Most fighters say “when I win” not “if I win,” but Santa Cruz knows that at age 32 and with a lot of mileage on his boxing odometer he is likely in for a tough fight. He’s the underdog and embracing that status.

“I know,” he said of being the underdog for a rare time in his career. “It’s because he has 22 knockouts out of 23 fights. He’s a big hitter, I’m a smaller guy, but I know Gervonta didn’t ask for this fight. I’m the one who asked for this fight. They made this fight and I just want to prove myself. I want to fight the best and who better to fight than Gervonta Davis? I want to go out there and give him a great fight.”

Santa Cruz acknowledged Davis’ power but boasted about his chin. In 39 fights covering 261 rounds, Santa Cruz has only been knocked down once, and that was on a rabbit punch that the referee didn’t call in his 11th pro fight, a six-round decision win over Robert Da Luz in August 2009.

In other words, even though Santa Cruz has taken all sorts of blows from contenders and other titleholders for many years, he has been resolute in doing so.

“Never knocked out, never (legitimately) dropped in a fight shows I can take a hit,” Santa Cruz said. “We’ll go out there and see if we can take Gervonta Davis’ punch. Hopefully we do. We will stay there, we’re gonna be smart, and at the end of the day when fight day comes we’re gonna see if I can take a punch from him and see how his power is.”

In the end, he said he expects the fight to go the distance.

“The way I see it playing out is it going all 12 rounds and me beating him on a decision,” Santa Cruz said. “I’m gonna be really smart and not get caught with his big punches. The only way he’s going to beat me is if he knocks me out because I’m gonna be on top of him throwing a lot of punches, using my experience from the outside. I’m gonna do all kinds of things. Once I’m up there in the ring I’m gonna win the fight. But I see myself winning a 12-round decision.” 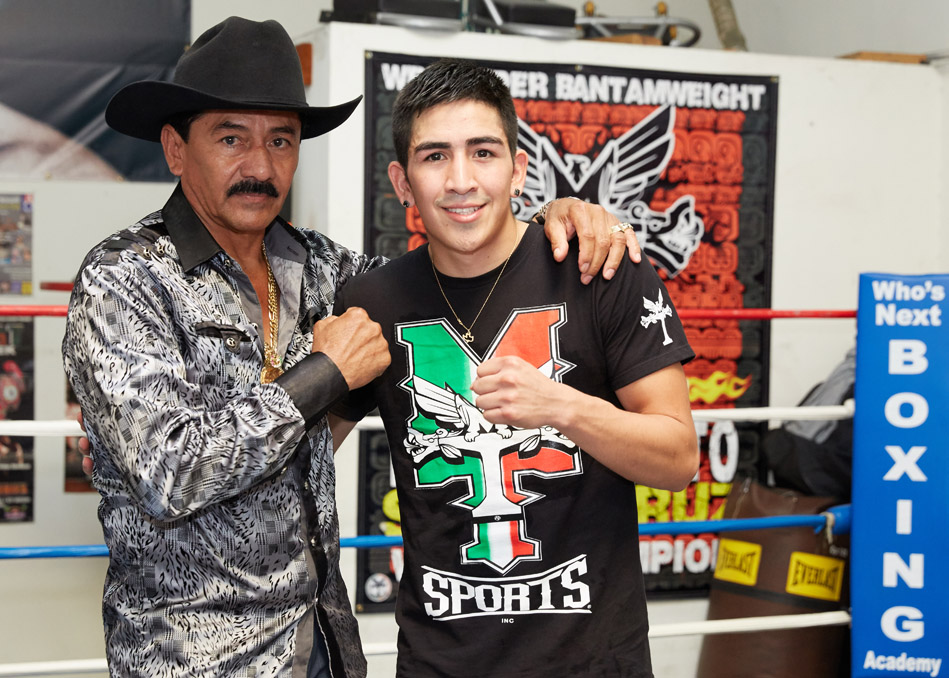 Antonio Santa Cruz, Leo’s older brother and co-trainer along with their father, Jose Santa Cruz, said he has faith in his brother.

“Leo has put on some muscle and his power has gone up a lot. He’s looking really strong,” said Antonio, who is the hands on trainer due to Jose’s ongoing battle with cancer and recent bout with COVID-19. “People say that Gervonta is a monster in the ring, but I think Leo is going to be the monster on [Saturday].

“We always follow the advice of our father, Jose. He’s making the rules while I’m in the ring with Leo. He knows what he’s doing. He’s proven it fight after fight with Leo. Gervonta is a knockout artist, but I, of course, believe that Leo can take him. Leo is smart and so dedicated. He has the extra motivation in seeing our father still here fighting through his cancer. He sees how strong he is fighting and knows he can be strong enough to beat Gervonta. I think that Leo is going to throw too many punches and give too much pressure. Leo has the experience and the intelligence to get this win.”

Because of their styles and fan bases the promoters, Premier Boxing Champions and Showtime decided to go the pay-per-view route. Santa Cruz and Davis have both been on pay-per-view cards, including on undercards of Floyd Mayweather (Davis’ promoter). But this is the first time they will headline, which Santa Cruz is excited about.

“It means the world to me. It’s a dream come true,” Santa Cruz said. “It’s what I worked my whole life for to be on this stage, a pay-per-view fight against one of the best out there, Gervonta Davis. So, it’s something like a dream coming true. I’m very motivated. I know a lot of people aren’t giving me much of a chance but it gives me that motivation to go out there give my best and at least I’m trying.”

A win, he said, would quiet those critical of his resume and be a major part of a legacy that is important to him.

“I have a chance to make history. I’m very excited to do that,” he said. “I could be a five-division world champion and continue to make history. There haven’t been many fighters that have been a five-division world champion. For me to do that will put me up there among the best and that’s what I want. The winner of this fight deserves to be on the pound-for-pound list, which makes this fight even more important. That’s what I want to accomplish and getting it against a fighter like ‘Tank’ Davis is something that a lot of fighters dream of. When I retire I will be remembered as one of the best.”