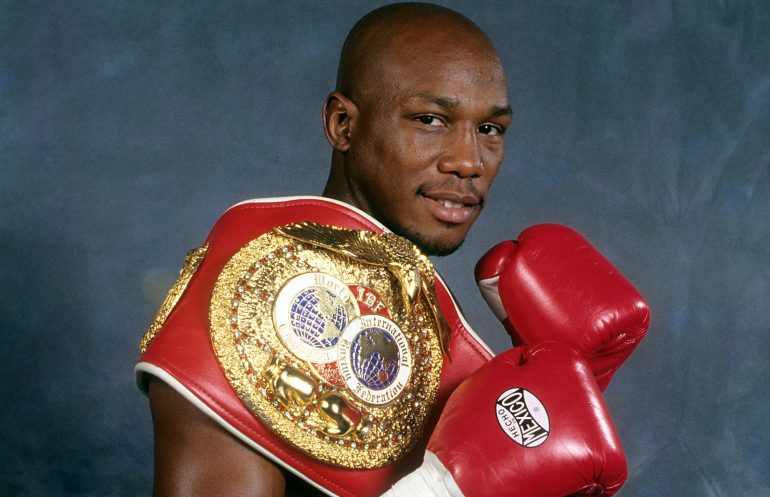 Photo by The Ring archive
26
Oct
by Anson Wainwright

Austin was born in Cincinnati, Ohio on April 14, 1971. He was the third eldest of five children raised by a single mother in the tough Over-the-Rhine district of the city.

“It was a rough time, [there were] drugs in the neighborhood,” Austin told The Ring. “I was hit by a car when I was a young kid. I lost my memory, how to walk and talk, so I had a learning disability. I was a slow reader, couldn’t remember names and faces, but my mom was a teacher and she taught me how to do math and how to read and write.”

When Austin was nine years old he started boxing, however, he drifted away from the sport only to come back to it at 16 following his mother’s passing.

Austin was a decorated amateur and was named as an alternate for the U.S. Olympic team in Seoul 1988. That lit a fire under him and he won several national titles – including the Golden Gloves as a flyweight in 1990 and 1991 – to earn a place in the 1992 team.

The Cincinnati native lost at the semi-final stages in Barcelona due to an injury sustained in his bout against Raul Gonzalez of Cuba. He returned home with a bronze medal and decided to turn professional after going 113-9 in the unpaid ranks.

Austin signed with Don King and made his professional debut in April 1993. “The Cincinnati Kid” would be given the opportunity to fight on some major cards.

“That’s what motivated me the most, fighting on the undercard of Mike Tyson and the [Julio Cesar] Chavez-Frankie Randall card,” he said. “I always trained hard. I felt like if I can knock a guy out that’ll be more exciting than anything and I was getting first-round knockouts early in my career.”

Austin moved his record to 15-0-1 but was sidelined for an extended period. When he returned, he was matched with Mbulelo Botile for the IBF 118-pound title in July 1997.

Both had their successes and the fight was in the balance until a cuffing right hand dropped the champion for a flash knockdown in the seventh round. That gave Austin the confidence to show his vaunted power and he ended proceedings with a lightning bolt right hand in the eighth.

Afterward it was revealed that Austin’s jaw was broken in two places and it was doubtful that he’d fight again. When the doctor performed an MRI scan and an X-Ray, he also discovered that Austin had a calcium deposit at the back of his right eye, which he’d been carrying since the Olympic semi-final.

Ultimately the condition wasn’t career ending and he went on to face the likes of Arthur Johnson (UD 12), Ratanachai Sor Voraphin (UD 12) and Adan Vargas (TKO 10) during his championship tenure.

Austin’s career was blighted by inactivity and an inability to secure a big fight.

“I had to be patient,” he said. “I just put trust in the people I was with. I was sad, disappointed, frustrated, I never showed it, never expressed it on TV by complaining. I never wanted to be looked on as a complainer. I should have got those big fights. It’s a tough sport.”

His former trainer, Aaron Snowell, remembers only too well how difficult it was to entice any of the big names to face his fighter.

“Nana Konadu wouldn’t fight Tim, so they made Konadu and [Johnny] Tapia on the premise that if Tapia beat Nana Konadu he would fight Tim Austin,” said Snowell. “[Tapia] didn’t and took off running.

“Don tried to make fights with Paulie Ayala, but he didn’t want to fight Tim. Why? Because No. 1 his boxing skills, No. 2 Tim was a one-punch knockout artist. He’s a southpaw, plus he could punch.”

Austin was ahead on the scorecards against the up-and-coming Rafael Marquez but lost his title and unbeaten record when he was stopped in the eighth round in February 2003.

“It was my mistake,” said the former champion. “I sat in the sauna the night before the weigh in. I felt mentally exhausted. A loss is a loss and you have to learn from a loss and overcome it. I made that fight more difficult for myself.”

Austin didn’t fight again for two-and-a-half years and when he did he was unable to find his way back to the upper echelons of the sport. He bowed out with a record of 27-2-1 (24 knockouts).

“After I lost my title everything went downhill,” Austin said. “I lost my home through not being able to pay my taxes and mortgage.

“I had some bad business deals I made and that put me in a bad situation. When 9/11 hit I had stocks and they dropped.”

Austin, now 49, still lives in Over-the-Rhine. He is divorced and has seven children. He went to culinary classes and became a chef, and he helps to feed the homeless. He also has his own cleaning business.

BEST JAB
Mbulelo Botile: You had to avoid Botile’s jab because he was a strong guy. If he was to hit you with a jab it could give you blurred vision. I had to learn how to block and defend myself from getting hit by his jab.

BEST DEFENSE
Rafael Marquez: Marquez had a great defense when I fought him. My thing was to break his defense. I had to figure that out and I threw punches in bunches, like my trainer told me. Throwing punches in bunches would open a shot up.

BEST HANDSPEED
Ratanachai Sor Vorapin: He was a real solid fighter. His speed was more ground effective as far as movement because he had big legs. I didn’t think he could move as fast as he could. He was a strong guy anyway and I knew I couldn’t stand in front of him and get hit with unnecessary shots.

BEST FOOTWORK
Adan Vargas: He had good footwork and ring generalship. I had to be very particular in how to approach him in a fight, he was very patient. He was more of a strategist, the way he came at you with his style. He had good balance and he knew how to get in and out. He was real crafty with footwork.

STRONGEST
Botile: Botile was the strongest guy I fought. I thought I was in there with a lion, this guy is a killer. He was able to keep pressure on me and still throw punches, which a lot of people couldn’t do. They couldn’t keep coming forward because I had a strong jab and a strong left hand, but with Botile he kept coming forward regardless of how much I was hitting him. It seemed like it didn’t bother him.

BEST CHIN
Arthur Johnson: He took some of the best punches I have thrown at a fighter. I couldn’t believe Arthur Johnson never went down. I heard a lot about [Mark Johnson knocking Arthur Johnson out in one round], but Johnson had to lose a lot of weight [for that fight].

BEST PUNCHER
Marquez: Marquez hit me with a shot I wasn’t expecting but it was in the later rounds when I was a little bit exhausted from sitting in the sauna and things like that. I stood in front of Marquez and getting hit with a big punch is what cost me. I think Marquez was a bigger puncher [than Botile].

BEST BOXING SKILLS
Johnson: He had skills and poise and was a master of his craft. Arthur Johnson was a nice, mature boxer, a smart technical boxer with a good, sharp jab and good balance. I’ve got a lot of respect for Arthur Johnson as far as skills and talent and being a former Olympian as well.

BEST OVERALL
Botile: When you’re facing a world champion they’re at the top of the pedestal, of course they’re the best. To be best you’ve got to beat the best. He was dominating the weight class at the time. He was patient and strategizing on wearing me down.