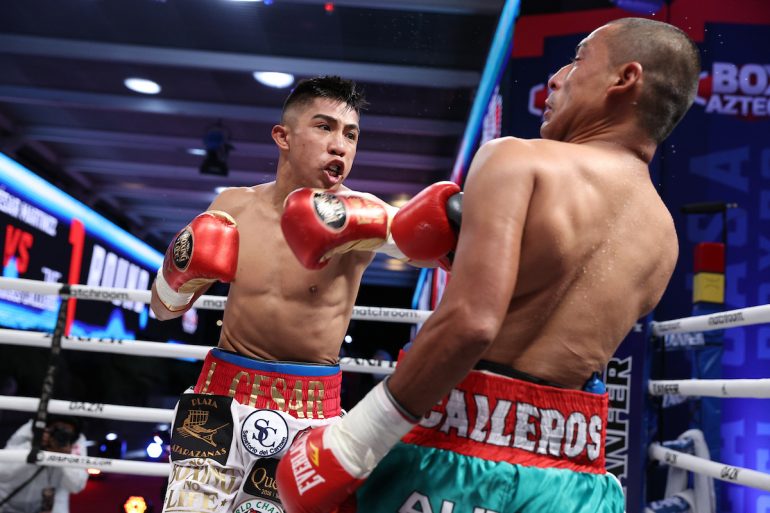 Martinez (17-1, 12 KOs), 25, of Mexico, who shares trainer Eddy Reynoso with Canelo Alvarez, was making the second defense of the vacant 112-pound belt he won by ninth-round knockout of former titlist Cristofer Rosales in December.

He went right at his opponent from the onset, connecting with a series of left hands that forced Calleros to touch the canvas for a knockdown in the opening round.

It was more of the same in the second round as Martinez puzzled Calleros, subtly switching from orthodox to southpaw and bringing heavy artillery behind him.

Eventually, it was the counter right hand from Martinez that clipped Calleros on the chin and left him in no man’s land against the ropes.

The time of the stoppage came with just 19 seconds remaining in round two.

It was an easy night for Diego Pacheco.

Pacheco didn’t break a sweat as he systematically dismantled Mendez from the opening bell.

In round two, Pacheco nailed Mendez with an uppercut that badly hurt him. Seconds later, Mendez’s legs gave out on him and took a knee.

Of his three defeats, Mendez has been knocked out in two of those contests.

Meanwhile, Pacheco’s run marches on, as he notched his seventh knockout win in his last eight bouts.

It was guns ablazing for Austin “Ammo” Williams as he used his diverse arsenal to neutralize Esau Herrera.

Williams scored a fifth-round stoppage of the 36-year-old veteran to remain undefeated.

It was a boxing clinic for Williams in the second round as he battered his outmatched opponent. He connected with crisp left hands upstairs and a variety of body punches.

Herrera was hit on the belt line later in the round and shook his glove in pain as he looked at the referee.

Sensing that the referee hadn’t called time, Williams took advantage and connected with a series of flush shots.

The same sequence would play out again late in round two as Herrera dropped his hands to complain to the referee about a low blow, but Williams once again took advantage of the error.

In round five, Williams badly hurt Herrera with a left hand to the body. He followed up with a crisp left uppercut that left him momentarily out on his feet.

Williams (6-0, 5 knockouts), 24, of Houston, Texas, connected with one more massive left hand before the referee bear-hugged Herrera to stop the action.

Both fighters entered and exited their fights with their undefeated records intact. 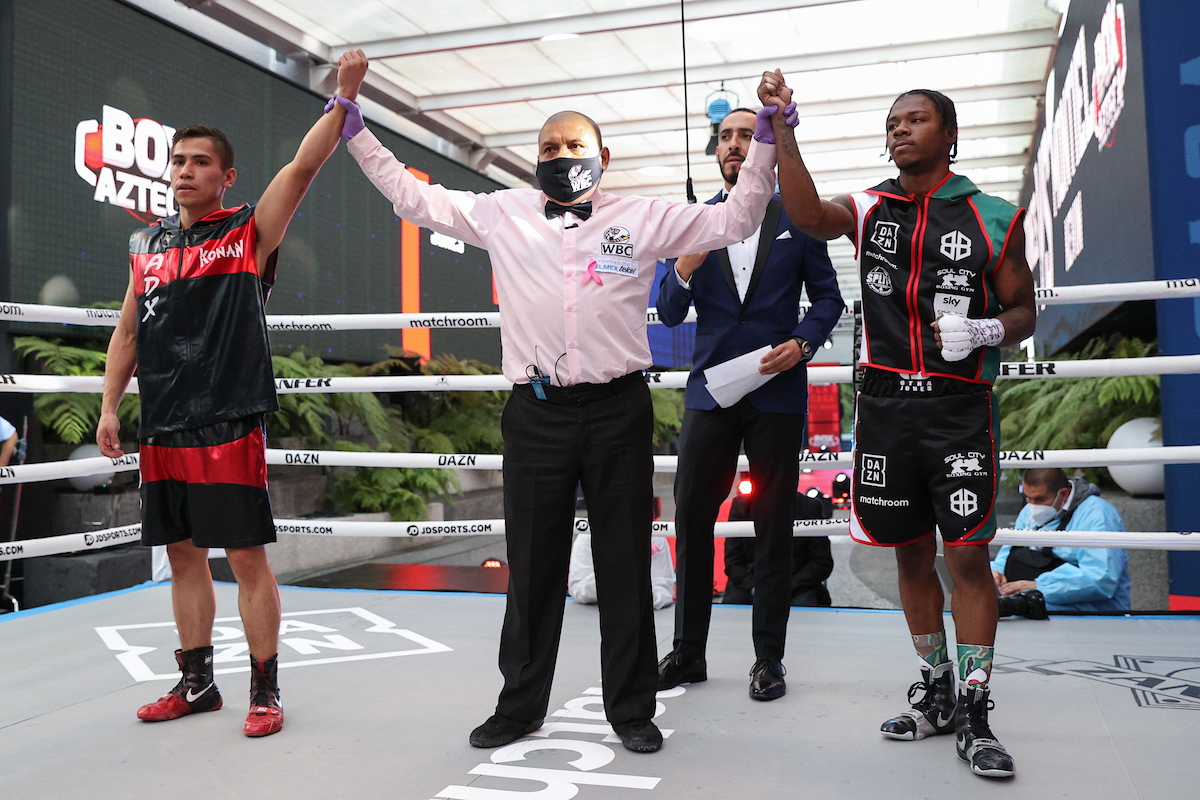 Junior lightweights Otha Jones III and Kevin Montiel Mendoza fought to a six-round draw in the first of a six-bout DAZN streamed card at Gimnasio TV Azteca in Mexico City.

Luis Medina scored the fight 58-56 for Jones, Patricia Flores had it 58-56 for Mendoza. However, Abraham Ibarra scored it 57-57 for the draw.

Jones caused Mendoza to stumble on his toes after a crisp left hook landed near the end of the first round.

In the second of their scheduled six-round contest, Jones (5-0-1, 2 knockouts), 20, of Toledo, Ohio, who accumulated an immaculate amateur record of 283-13, picked up the pace.

Midway into the frame, Mendoza kept Jones honest, landing some sneaky right hands on the inside.

The back and forth place continued into the third round, as Jones began to punch more fluid. He established his jab from the outside and mixed in some strong left hands.

Mendoza (6-0-1, 3 KOs) mounted a rally in the fifth round when Jones stood stationary inside the pocket, allowing the 21-year-old Mexican to land some hard punches.

Mendoza dug to the body with a left hand and got the better of Jones on most of their exchanges.

Mendoza, who took the fight on 24 hours notice, brought the fight to Jones in round six, backing up his adversary to the ropes, and took the wind out of Jones’ sails with a precise body attack.