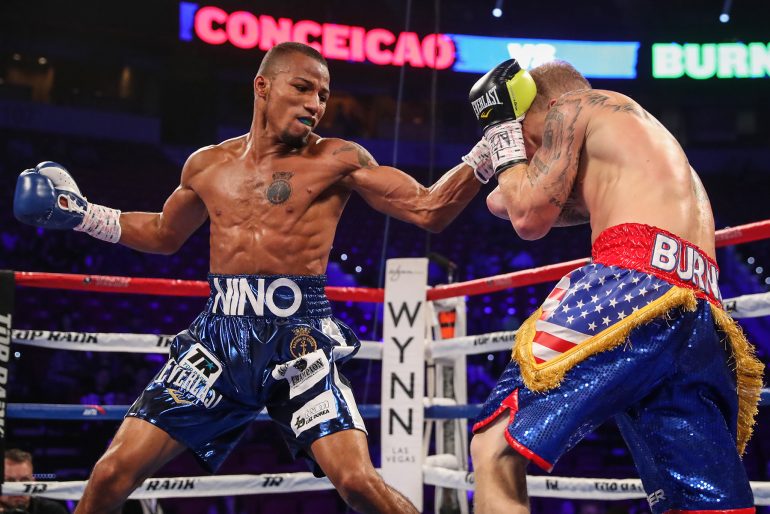 The 10-round bout will take place at the MGM Grand in Las Vegas and will serve as chief support to Naoya Inoue defending his Ring Magazine bantamweight championship and unified titles against Jason Moloney and Ewa Brodnicka defending her WBO junior lightweight title against Mikaila Mayer.

Conceicao (14-0, 7 knockouts) has fought under the Top Rank banner since 2016, the same year he won an Olympic gold medal for Brazil in Rio.

In his last bout, on August 29, the 31-year-old, who resides in Salvador, dropped countryman Eduardo Pereira Dos Reis three times before the fight was stopped in Round 2. The win over Reis came almost 15 months after his previous fight, which was a one-sided win over Carlos Ruiz of Mexico.

Coria (12-3, 6 KOs) last fought on June 11, losing a close majority decision to Adam Lopez. The 22-year-old, who resides in Perris, California and is trained by Robert Garcia, built an early lead and gave a good account of himself before Lopez rallied late to grind out the win.

Junior flyweight Jesse Rodriguez (12-0, 8 KOs), a 20-year-old who is also trained by Garcia, will return to action in an eight-round bout against an opponent to be determined. Rodriguez, who is promoted by Teiken Promotions, scored an impressive win in his last bout, on September 5, dropping former world title challenger Janiel Rivera of Puerto Rico three times en route to a knockout win.

Fringe junior welterweight contender Julian Rodriguez (20-0, 13 KOs) of Hasbrouck Heights, New Jersey will face an opponent to be determined in a 10-round bout. In his last bout, on August 22, Rodriguez dropped Anthony Laureano three times en route to a first-round knockout win.

Junior welterweight Andy Hiroaka (15-0, 10 KOs) will face Rickey Edwards of Paterson, New Jersey (12-4, 3 KOs) in an eight-round bout. Hiroaka, who resides in Yokohama, Japan, is a stablemate of Inoue and has not fought since stopping Rogelio Cazarez on November 30.