It is election season, the home stretch, in America.

Yard signs are up for another 10 days, and then it’s decision time.

Within the boxing sphere, there isn’t the same level of rancor in the forthcoming election to choose a leader of the International Boxing Association (AIBA) as we see in the Trump vs. Biden clash. But, truth be told, there is a good helping of drama present within the organization that wants to re-gain their status as sanctioning body for the 2021 Tokyo Olympics.

For those unaware, AIBA was booted, by the International Olympic Committee (IOC), from their oversight position, because of a pattern of misdeeds.

This matter flies under the radar of many pro boxing fans, but the case can be made that more of us should in fact pay closer attention, because the health and wellness of the amateur scene certainly does impact the professional space.

In March 2019, then President Gafur Rakhimov stepped down as president and the organization elected  Mohamed Moustahsane as Interim President unanimously. And will that shift result in AIBA being re-instated, their reputation buffed and shined?

Possibly; it’s been reported that Rakhimov has been involved in organized crime. The 69 year old Uzbekistan native for more than 20 years in major media has been portrayed as an unsavory sort, and in March, Moustahsane (see below), an MD from Morocco, got the leadership slot. 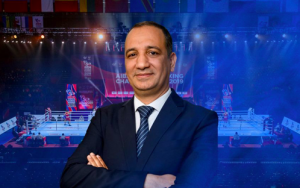 That didn’t stop the IOC from suspending AIBA from overseeing boxing at the Tokyo 2020 Olympics (since shifted to 2021) and appointing a special task force to run the Games.

Word is that Rakhimov still has hopes of re-gaining a foothold for that top position, but his rep likely doesn’t give AIBA their best chance to prove to the IOC that they are a clean organization intent on being wholly on the up and up. Dutch Boxing Federation head Boris van der Vorst has his hat in the ring, with Asian Boxing Confederation President Anas Al Otaiba, from the United Arab Emirates and Azerbaijani Suleyman Mikayilov. Maybe more folks, like Russian Umar Kremlev, will seek the slot, they have until Nov. 2 to gain entry.

It can be hard to decipher, outside looking in, who is who, and what they bring, positive and negative, to the table. And some of the stories that are generated by some of the would be leaders make you scratch your head. Did Kremlev think that it would make his candidacy across the board more appealing when he offered to spend about $16 million to pay down AIBA’s debt burden? And some of the press Rakhimov has received make his bid to render a comeback surge harder to picture.

From an AP byline that ran on the ESPN website in July 2019: “That was despite opposition from the International Olympic Committee, which pointed to United States sanctions against Rakhimov. The U.S. Treasury has accused him of involvement in drug production and heroin trafficking. Rakhimov denies any wrongdoing and is trying to have the sanctions lifted.”

AIBA’s rep got stained in the Wu Ching-kuo era; he ran the org from 2006 to 2017, and you might recall AIBA came under fire during after the 2016 Olympics. Mick Conlan from Ireland summed up the feelings of too many persons involved in the sport, who saw horrid decisions and AIBA mismanagement mar the Games in Rio. Financial irregularities have been pointed out, and the possibility of AIBA going bankrupt had been mentioned for several years.

The election and fate of AIBA is probably seen as irrelevant to plenty of people who come here to stay up to date on the pro game. But us hardcores should, I think, keep at least half an eye on how the AIBA election plays out. We should hope for stability in the US and world amateur boxing scene, because that is the table setter for the pro game.