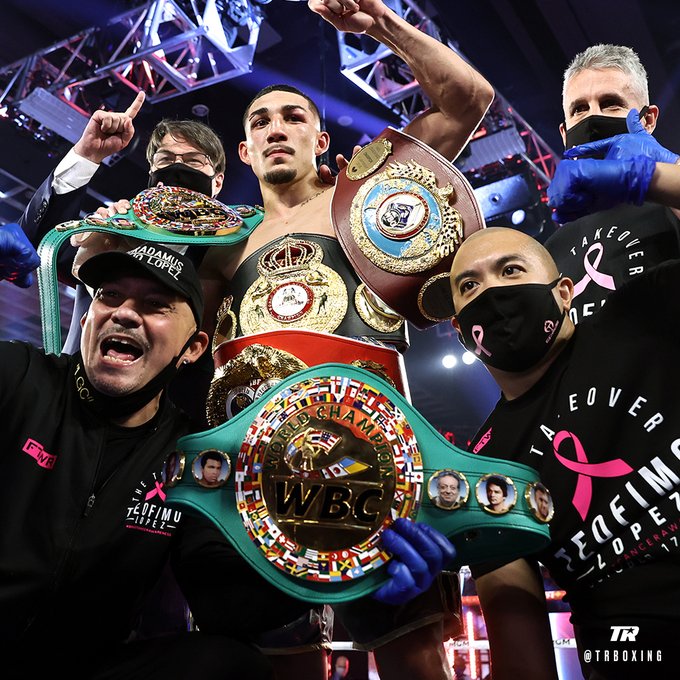 According to Nielsen, the Lopez-Lomachenko fight was watched by an average audience of 2,729,000, peaking at 2,898,000 in Lopez’s 12-round unanimous victory from an empty MGM Grand conference room in Las Vegas.

But Nielsen does not take into account those who watched on the ESPN app and ESPN+. According to multiple sources, The Ring discovered that the figure is close to 1.5 million, putting the grand total to 4.2 million viewers for the Lopez-Lomachenko fight.

Arum was counting on between two and three million viewers for the telecast, which ESPN held in partnership with Top Rank, and it looks like he received more than his wish.

“That number just shows that boxing is a sport that appeals not only to its fanbase, but to sports fans in general, which is great news for boxing overall,” Arum said. “The fight overall got over 4 million, and it also shows that if you give fans a good fight, a good, important fight, and you put it on free television, people will come and watch.

“We’re pleased. We got social media reports from Twitter and other reports that the fight was trending almost as much as the presidential election. We need to keep this momentum growing. You can’t take fights, good fights, but not great events, and put them on pay-per-view.”

Arum pointed out that revenue streams have been limited during the COVID-19 pandemic. He feels overpriced pay-per-views are “unconscionable.”

“Look at the Charlo fights on Showtime, they’re good fighters and they were good fights, but to have a pay-per-view charged at $70 or $80 is not going to work,” Arum said. “The Charlo brothers barely did 70,000 views and they lost a fortune (sources told the Ring the Charlo Showtime PPV actually drew over 150,000 buys). The Muhammad Ali-Leon Spinks rematch (in 1978) drew an average audience of 90 million on network television (and more importantly, a 46.7 rating, meaning 46.7 percent of TV sets in the nation were tuned in).

“As a result, boxing on television really boomed. That fight was the highest rated sports program until it was surpassed by a Super Bowl (XX between the Chicago Bears and New England Patriots in January 1986, which drew an average audience of 92,570,000 and a 48.3 rating). What’s happening now is you put fight on pay-per-view, and you charge big, big prices, and it’s not only the promoters, but the cable systems, and the satellite providers who take 45-to-50-percent of the total you pay for themselves, without investing in the sport.

“What did they do? They killed the golden goose. Pay-per-view, as we know it now, is dead. So, what do you do when you want to go back to pay-per-view for certain fights, you do what the English do? You charge 20 pounds, and in rare cases 25 pounds for watch pay-per-view, whether it’s BT or Sky Sports. They take 15 percent from what’s paid, and give the rest to the promoters so they can pay the fighters.

“That’s the game plan. If you want to watch fights in pay-per-view, they have to reduce the price and take a small percentage. That’s the answer. They’re not going to do that. There are good fights out there that don’t belong on pay-per-view.

“The (Errol) Spence (Jr.)-(Danny) Garcia fight is a good fight. If that were on FOX, it would get huge numbers. Instead, it’s on pay-per-view, and they’re going to lose money on that fight. They are the lessons we’ve learned.”

Arum said Top Rank will take any mid-major fight and place it on ESPN, like the Terence “Bud” Crawford-Kell Brook scheduled for Nov. 14 at a location that is yet to be determined.

It needs to be noted, for accuracy sake, that ESPN is not free, since it is a subscription-based cable network grouped inside a monthly sports package that comes with most basic cable systems. ESPN goes to around 83 million subscribers.

One collateral benefit of the Lopez-Lomachenko fight being held on ESPN was that 4 million more people now know who Lopez is. The undefeated 23-year-old lightweight from Brooklyn, N.Y., received a star-turning platform.

“That’s correct and it is good for the sport, and good for Teofimo,” Arum said. “He’s a very smart kid, with a high boxing IQ. He’s also a really good kid, who did a hell of a job selling the fight. Teofimo is a sensible kid, who’s charismatic, who is also cerebral and can be talked to about doing the right thing for himself and for the sport.

“Any way you look at it, boxing won Saturday night. Teofimo made a big, big statement. The biggest mistake we could make is to put Teofimo back on pay-per-view. We have to keep building on it. For his next fight, whoever that’s going be against, should also be on free television.

“The payoff down the road, when the pandemic is behind us and we get the pay-per-view industry to make some sense, and cable companies and satellite companies cut down their percentage from 50 percent to 15 percent, since they put back nothing into the sport, we can lower the prices.

“One thing is certain, Teofimo is now a star, and 4 million people know it. We have to get as many fights as we can on free television, and we have to get FOX to follow suit. We all have to work together. Boxing benefits.”