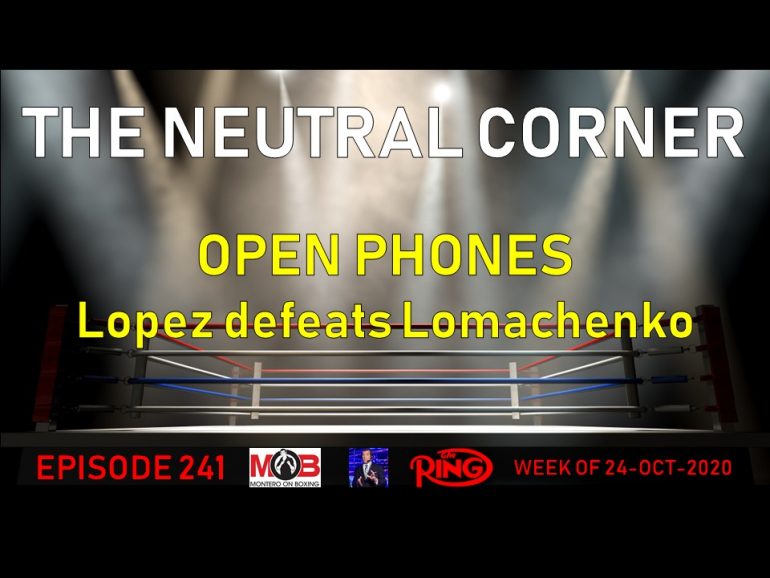 Most callers felt that Lopez won the fight. In terms of scoring, the general consensus among fans was anywhere between a 116-112 win for Lopez, to a draw. Many disagreed with official judges Steve Weisfeld and Julie Lederman, who scored the fight 117-111 and 119-111 for Lopez respectively. Some wondered if Lomachenko was the victim of anti-Eastern European bias, others felt he simply started too late.

Almost everyone agreed that the loaded criticism against the former champion on social media from fans and even several fighters was unwarranted, unfair, and undermined Lopez’s accomplishment.

A London caller, disagreeing with the analysts who scored Lomachenko-Lopez as a draw, suggested that judges should be more open to scoring swing rounds evenly. “This fight was a really good example of why judges should do it more often,” he said. “If you’re in a place where you’ve got to choose between one guy landing a couple jabs and another landing a couple of body shots, with no definitive winner, you should just score it even. Otherwise you can have a situation where a guy who’s clearly lost the fight ends up with a draw.”

Mark from Ireland was very surprised at how the fight played out. “I didn’t expect that, it was cagey,” he said. “So many rounds were even, depending on what you preferred. I scored it six rounds to five with one even for Loma initially. Then I watched it a second time and scored it 115-113 for Teofimo. I’m really hyped to see where he goes from here.”

Brad from Boston disagrees with the “Loma started too late” narrative. “I think there’s a lot of people out there who aren’t giving Lopez enough credit,” he said. “Teo really made Loma uncomfortable early on, didn’t let him get any sort of offensive rhythm going. Anytime he threw out a testing jab, there was always something coming back real hard. Whether it was a body shot, or that uppercut that Teo kept landing.”

On the contrary, Justin felt that Lomachenko had caught up to Lopez in the second half of the bout. “If it were a 15 round fight like the old days, I think Loma would’ve won,” he said. “He figured him out. I had Loma ahead going into the 12th round, but then Teofimo turned it up to make it a draw.”

Thad expressed concerns about what he perceives as a bias against fighters from Eastern Europe. “Loma saw what happened with Sergey Kovalev against Andre Ward, GGG against Canelo in Vegas,” he said. “He should have known he was not going to get a fair shake on the cards unless he had a definitive win. He did himself a great disservice by showing Lopez too much respect, and taking those first five rounds off. There is a clear and inherent bias against Eastern European fighters. For whatever reason, some do not want to see them succeed in this country. And there was no rematch clause? This fight had rematch written all over it! Loma’s team was very naïve going into this fight.”

Dan saw the fight as a clear win for Lopez but disagrees with people on social media claiming Lomachenko was exposed and/or overrated. “Lopez won that fight easy,” he said. “Loma didn’t do anything in the first seven rounds. But Loma is still a great fighter, and all the Twitter stuff is just dumb. People know Loma is great, they just have Twitter Thumbs.

Hamed saw it as a one-sided fight. “I actually thought that Lomachenko’s fight with Orlando Salido was closer,” he said. “I don’t agree with people who had Loma-Lopez a draw. I had it 117-111. Loma took off most of the first eight rounds. He did similar to what Wladimir Klitschko in his fight with Tyson Fury, only Klitschko didn’t wake up until the 12th round. Lopez impressed me with the body shots, I think he’s got Loma’s number. I don’t know about a rematch for Lomachenko.”

Although he scored it a draw, Danny from Bakersfield, California feels the right man won and has become a Teofimo Lopez fan. “If you were going to make a case for a winner, it was Lopez,” he said. “And he said all the right things in the post-fight press conference. I wasn’t a huge fan before because of all the trash talk he was doing. But he has toned it down. I hope he talks to his dad though and tells him to stop all the trash talk. I think Teofimo can become a huge star, like Manny Pacquiao huge, if his dad would shut his mouth and be more likeable.”