Defending Julie Lederman’s card and other takeaways from Teofimo triumph 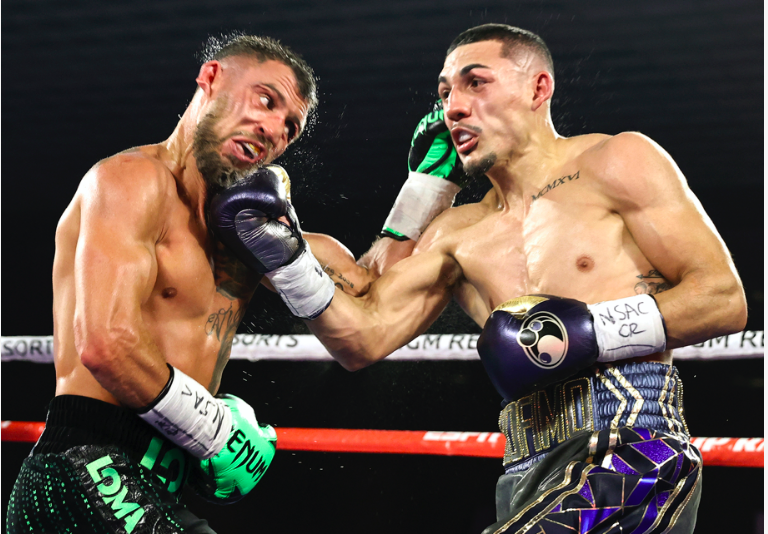 When he told me this on Oct. 9, I didn’t not believe, because I’ve been doing this long enough to have enough wisdom to know that you never know til it plays out. But did I think there was a possibility it wouldn’t go the way he was picturing? Sure.

“Tune in Oct. 17,” said Teofimo Lopez, “don’t miss history in the making, father son duos, both trained by fathers, two amazing fighters proving to world and themselves they are the best in the world, in the best division. It will be fireworks! Also, stay safe, wear masks, wash your hands, best to all the fans, hopefully in 2021 it will be back to normal.”

I loved that ending element, that “wear masks” portion as much as anything, to be honest.

The other stuff, really, truly, I didn’t KNOW how much Teofimo felt that in his heart, or how much of that was him saying stuff to help promote the event, to help fire himself up, whatever.

Well, he proved doubters wrong, didn’t he? Like, massively, completely, ridiculously so.

Let’s look at some top takeaways from that lightweight showdown which insured Teofimo’s legacy stamp on the sport, and had more than a few folks Googling Nostradamus before and after the bout. 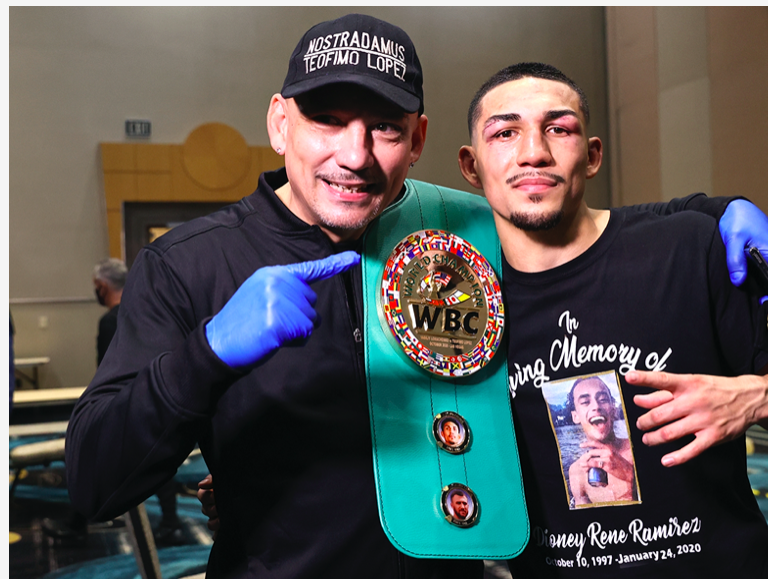 Teofimo “Junior” Lopez and Teofimo Lopez the younger feeling the buzz after the kid beat Lomachenko Oct. 17, 2020. The father/trainer earned the right to wear that cap, no ifs or buts. (Pic by Mikey Williams/Top Rank)

–The post-fight press conference proved a worthy use of time, even though it was hellaciously late. (Yeah, it kinda sucks, but it is what it is, that this main event started so late, after midnight, for us on the East Coast, and UK hardcores. Why not find some common ground, though, start the main event by 10:45 PM ET?) Teofimo the elder mixed serenity, humility and shit-talkery, to good effect. He didn’t do a coffin dance on the Lomachenkos, not overly. But yes, he did tell Papachenko to go back to Ukraine, and give his son more dancing lessons. No, the father/trainer didn’t get all soft and gooey, and let all the bygones be bygones, but neither did he go overboard, and fling verbal napalm around like a zoo animal flinging poo. I liked his session, and told him so, giving a nod to his hat, which read “Nostradamus” on it.

For the record, Nostradamus was a French dude who we are told lived in the 1500s. He predicted things, and supposedly, had a good track record about foreseeing some shit others didn’t. Like, I guess, how the father told people when his son was 5-0 that this kid would be the pound for pound best really soon, or, like, now. And how he’d beat the tail off Lomachenko, when Loma was tagged the top pound for pounder by most analysts.

“Crazy emeffer,” that’s what plenty of people said about the dad, under their breath. Give this cat a Breathalyzer, please, they muttered. But on Friday late night, at that presser, the father earned the right to rub our noses in it, with that hat.

Nostradamus was said to have prophesied the French Revolution, the rises of Napoleon and Adolf Hitler, world wars and the nuclear savagery of Hiroshima and Nagasaki. Did he predict that Princess Diana would meet a bad end? You could interpret it that way, I guess (see below, left, people see this and tell you that N. foresaw the Princess Di life arc). 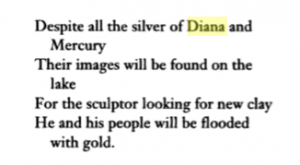 Me, I think what the father/trainer did with his son is more impressive than a shitload of Nostradamus’ predictions, which typically need molding and shaping to fit modern day scenarios in order to seem eerily prescient.

—Mark Kriegel said it on air before the match, said everyone here has rolled their eyes when hearing Teofimo Lopez the elder marvel at his kids’ skill set, and what the Lopez duo will do to the technical wizard Loma. True enough. But those that did more than roll their eyes, and publicly took a stance on Lopez Sr. and dissed and dismissed him, you all have a task to do. Publicly apologize to the father, because darn right, he got his son ready for this moment, and he is the 2020 Trainer of the Year. (Click here, to see all past winners of BWAA awards.)

—Such a shame that this is where we are in 2020, but for chrissakes, why in God’s name is Julie Lederman so high on this list? OK, we get it, you think her 119-109 card was off. Guess what? I think her card is a HELLUVA lot better than Andre Ward’s draw call on ESPN. Like, a shitload better. Upon first watch, the 11th was the round, to me, where Loma obviously won the session. Other than that, there were pretty obvious Lopez rounds, because round after round after round Loma didn’t bother to try and land. Sorry, not giving Willie Pep-Roy Jones defending rounds, just to prove what woke hardcores we are, OK?

Here is the Facebook note I sent Julie after the fight: “I like your damn card! I thought the 11th was the only obvious round LOMA won. People are wusses, afraid to tilt too hard in one direction, against a fighter as vaunted as Loma. Your scoring proved your strength of character, I believe. Your dad would be proud.” Her reply: “Thanks.”

People, leave Julie alone, and focus attention on where it should be: Lomachenko, for throwing 321 punches only, and Lopez, because his deeds matched his words.

I don’t like this practice, I don’t like how I see people throwing the darts at the easiest targets. They bust on sanctioning bodies, and judges, and yes, both those collectives sometimes deserve to have chops busted. But I see media taking it to them, instead of holding others to account, and I think that’s partially because they are not as much potential sources. Media doesn’t care about losing access to them, do they? In round 8, Teofimo landed about the same amount and threw maybe 20 punches more than Loma. Was that a CLEAR Loma round? It was not. But I’m seeing people declare that, while hammering Lederman.

Who doesn’t understand that it took actual (OK, virtual) balls to score that fight and only give the master one round? To slam her, diss and dismiss her, I think it’s bullshit. She was right there, you were watching the TV and being influenced by the call.

Round 10, was that a clear Loma round, even though Lopez threw maybe 10 or 20 punches more than him? It wasn’t clear, in fact. The only thing separating the two might be who you “liked” more going into it. The first 1/3 was a tossup, Loma probably got the second third, and maybe he got the last third, in the round that saw Lopez hit him on the beltline while he helped the rival fire low by putting his right forearm on the top of his head. Anyone saying that was a clear Loma round is WRONG, and pretty much obliterating their ability to cogently argue that anyone elses’ ability and competence to judge a fight is in question. So stop it, get over it, judging boxing is ridiculously subjective. Julie Lederman got the right guy winning, and too many of you are now acting like your buttons are pre-set, bitching about judging.

Spend 20% of that energy on pushing to remind people that we need to retain that certain mindset in relation to stopping fights. Nope, I still don’t love the reaction, from medical staff in Nevada, when Ivan Baranchyk was on the mat for four plus minutes Oct. 3. I didn’t feel and see urgency, why wasn’t he surrounded by a couple doc and ace EMTS, with oxygen in hand, at that moment? (But, I must share, I asked a prominent physician VERY well versed in proper protocol, and that MD told me after viewing the Baranchyk response it looked proper to them). Instead, people look for the easy targets to take whacks at, and it’s the easy way, and the lazy way.

LATE MONDAY ADD: I heard from two people who said dude, c’mon, you have said that you don’t care about what everyone and their brother has this fight or that one scored…and then you spend time writing about it…that makes no sense.

My bad: I should have made myself, and my stance, more clear. Over on Bad Left Hook, I wrote, “Sure, too much attention is paid to that scorecard from Julie Lederman. Part of that stems from the fact that this an era of excessive focus on self. I mean, really, who gives a s–t end of day how much you hated Julie’s card, and what you scored Loma-Lopez. You care in the same way you care about who is on your fantasy football team, but in actuality, no one else gives a flying f—-.

It doesn’t go without saying that in the above rant, I have one finger pointed outward…but also a few pointed at me. Yeah, many of the things I take issue with, I have been guilty of myself. And it would have been useful for me to lay that out there, clearly. In that column and this one, I tried to make clear, without going overboard with repetition, that we the media could do better in focusing on positives. And that WE have started to sound like we are pre-set to bitch about scorecards…and that there are sometimes better uses of our time and ink. Yep, that goes for me, too. Mea culpa.

–Let’s go deeper into that punch count, shall we?

Throwing approximately 321 punches over the course of 12 rounds made for a boring fight, from the perspective of non-hardcores. Let’s just put that out there, front and center. OK, one round, two, into three taking notes, collecting data. But this trend has built up and hasn’t received proper pushback from analysts and media. This is sports entertainment, folks, and ANY fighter that is spending none minutes “collecting data” is telling you they don’t care about entertaining you. Now, you can say who cares, they earn that right, it is their life on the line. Noted–but Lomachenko went overboard, and he’s not the only guy who does this. 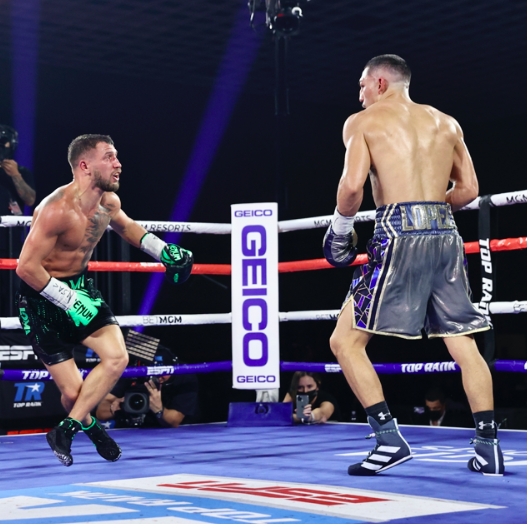 A round or two of feel ’em out, OK, that is within the bounds of reason. But any more than that is overboard, and tells watchers you don’t care if you entertain them. And that attitude won’t grow the sport one single bit. (Photo by Mikey Williams/Top Rank)

Some of you will say that he didn’t throw because he was worried/respecting the Lopez power. Makes sense. Hey, I am not a “you must go out on your shield” jackal, OK? But you have to know what you signed up for, and to a degree, why your purse is more than a million dollars. And it’s not to try and win rounds, round after round, by avoiding contact.

And you can do that, but if powers that be, promoters and platform runners, continue to latch on to people doing that, who are so revered by hardcores, then guess what? The sport will continue the slide that has been in evidence the last five or so years.

And don’t blame the age we are in, either, how peoples’ attention spans are so short they only stay fixated on hyper-violent rumbles.

Offense pays the bills, draws fans, people who go for KOs get more attention–and hardcores trying to prove their purity and encouraging that safety first and second mindset only serves to give the Peps cover to keep doing the same thing. Enough.

Add your own takeaways in the comments section, if you like, readers…

—Follow Michael Woods on Twitter, and go back, see what he scored the fight in real time. Hint: He was closer to Lederman territory than Ward territory.