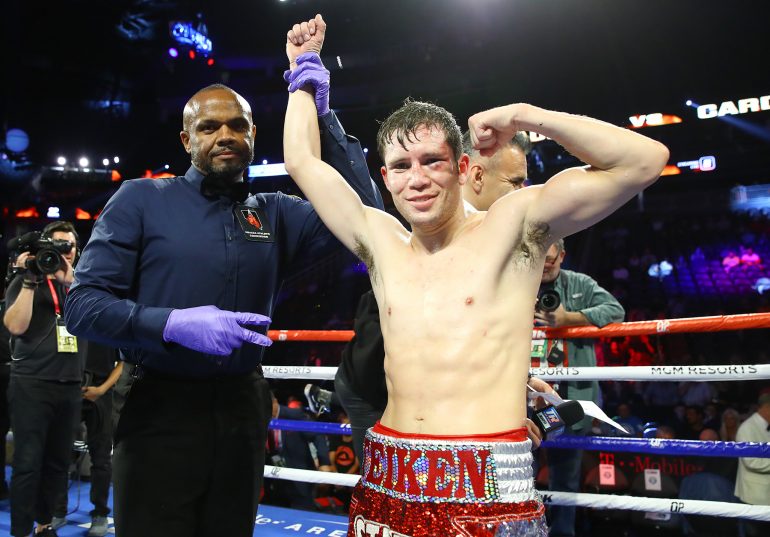 “I’ve been looking for this fight for a while,” Cuadras told The Ring through Noe Alvarez. “I’m much more prepared this time than the last time. This time, I only have two options: Win or knock him out.

The 32-year-old won the WBC title from Srisaket Sor Rungvisai in 2014, then made six defenses before losing to Roman Gonzalez in September 2016.

Afterwards, Cuadras’ form became patchy, losing two of his next three fights, including to Estrada in September 2017, but he has regrouped and won his last three fights and is in a good place entering the rematch. He is acutely aware of Estrada’s skill set.

“He takes a while to warm up, but once he gets going, he gets more difficult,” said Cuadras, who lost the first fight by one point on all three scorecards. “He’s got a good liver shot and he has a good right hand, that’s the one he knocked me down (with) in our previous fight.

“The first fight, I gave it my all in the first rounds. In the late rounds, I lost all of my energy. I went too hard in the early rounds. This time I’m going to use my resources to go at Estrada, but strategically.”

Cuadras feels one particular asset will carry him to victory against his compatriot.

“I am much faster than he is,” said Cuadras. “I will use my speed so that Estrada becomes impatient and use that to attack him.”

In preparation, “Principe” decamped to Toluca, where he has trained at the state-of-the-art Centro Ceremonial Otomi, which sits 4,000 meters above sea level.

Cuadras knows plans are afoot for Estrada to face another old rival, Roman Gonzalez, in the first quarter of 2021.

“(Estrada’s) not going to have the opportunity to fight ‘Chocolatito,’ because I am going to take that opportunity,” he said defiantly. “I want that rematch with Chocolatito as well. Everybody knows I beat Chocolatito.

“I want everyone to know, I’m here for a while. I’m going after Chocolatito, Jerwin Ancajas, Kazuto Ioka. I want to unify.”

Respected trainer Rudy Hernandez will be in Cuadras’ corner. Hernandez has devised a plan for an upset.

“Cuadras understands this is his last shot at becoming champion,” Hernandez said. “After watching the first fight, I came up with four different game plans that if he’s able to execute, he will have a night to remember.

“Of course, I’m not underestimating Estrada, he’s a solid champion. One of Mexico’s top fighters at the moment.

“Cuadras is training hard, giving his all. There will be no excuses. He’s trained at the Mexican Olympic facility, away from all distractions. I like what I have seen in training. One thing I can tell you, we’re too dumb to understand that we can’t win.”

Estrada turned professional in 2008. He came of age in a losing effort to former pound-for-pound king Gonzalez (UD 12) in November 2012, but rebounded to win WBA and WBO 112-pound titles from Brian Viloria (SD 12). After making five defenses, Estrada abdicated his throne to move up to junior bantamweight.

After losing to Sor Rungvisai (MD 12), he outboxed the big-punching Thai to claim Ring and WBC junior bantamweight titles in the rematch and gained acclaim as one of the best pound-for-pound fighters in the world. He currently sits at No. 8 in The Ring’s mythical rankings. The 30-year-old has long been plagued by a persistent hand injury, meaning he’s only made one defense since.

Estrada-Cuadras, plus Roman Gonzalez vs. Israel Gonzalez and Julio Cesar Martinez, will be broadcast on DAZN.