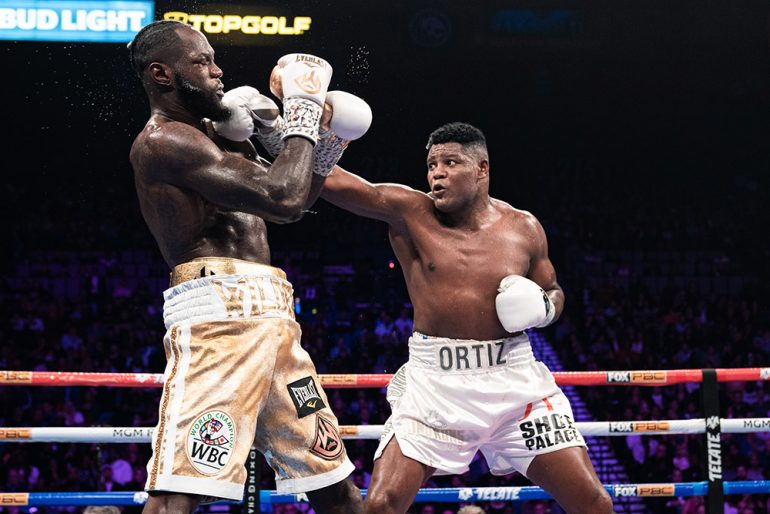 The 10-round bout will take place at the Microsoft Theatre in Los Angeles, California and will headline a three-bout ‘FOX PBC Fight Night’ telecast (8 p.m. ET/ 5 p.m. PT). All three fights will feature heavyweights.

“Sports fans love the power and drama of the heavyweight division and this lineup on November 7 will provide both in droves,” said Tom Brown, President of TGB Promotions. “‘King Kong’ Ortiz has long established himself as an upper echelon heavyweight, and he will look to work his way back to another title shot against the hungry and game Alexander Flores.”

Ortiz (31-2, 26 knockouts), who is originally from Camaguey, Cuba and now resides in Miami, Florida, was knocked out by then-WBC heavyweight titleholder Deontay Wilder in Round 7 of his last bout on November 23. Ortiz was up on all three judges’ scorecards at the time of the knockout. The bout was a rematch of their March 2018 clash that saw Ortiz get off the floor to hurt Wilder badly before losing by knockout in Round 10.

The 41-year-old southpaw, who is rated No. 5 by The Ring, believes he is still a top heavyweight.

“I can’t wait to get back in the ring and put on a great performance for all my fans,” said Ortiz. “I’ve been training hard and I’m going to show why I’m still one of the most dangerous and avoided heavyweights around. Credit to Flores for stepping up to the challenge, but I’m planning on making a statement November 7.”

Flores (18-2, 16 KOs), who resides in the Los Angeles suburb of Rowland Heights, took the fight against Ortiz after original opponent Scott Alexander withdrew from the fight due to COVID-19 reasons. The fight on November 7 will mark exactly one year since his last fight, a sixth-round knockout victory over Mario Heredia. In his previous fight, in December 2018, Flores was stopped in Round 3 by former titleholder Joseph Parker.

Flores’ only other defeat took place in April 2014 at the hands of Charles Martin in a clash of unbeaten fighters. Despite being a heavy underdog, the 30-year-old Flores is confident that he can score an upset win over Ortiz.

“When I got the call for this fight, I immediately said yes and I was ready to go,” said Flores. “I’m always in shape throughout the year, so now we’re just sharpening the tools for November 7. Ortiz is coming off of a big fight, and I’m preparing for the best Ortiz we’ve ever seen. I don’t know if he’s overlooking me, I just know that I’m going to be ready to take advantage of a life-changing opportunity.”

In the co-feature, unbeaten prospect Frank Sanchez will face Brian Howard in a 10-round bout.

Sanchez (15-0, 11 KOs), who is originally from Guantanamo, Cuba and now lives and trains in San Diego, California, defeated gatekeeper Joey Dawejko by unanimous decision in his last bout on March 7. The 28-year-old is trained by Eddy Reynoso, who also works with Canelo Alvarez, Oscar Valdez and unbeaten lightweight Ryan Garcia.

Howard (15-3, 12 KOs) last fought on August 3 of last year, knocking out Carlos Negron in the opening round. The 40-year-old, who resides in the Atlanta, Georgia area, has split his last four bouts, with losses to light heavyweight contender Umar Salamov and unbeaten cruiserweight Richard Rivera.

In the opening bout of the telecast, unbeaten Michael Coffie (10-0, 7 KOs) of Brooklyn, New York will square off against Minnesota’s Joey Abell (35-10, 33 KOs) in an eight-round bout.