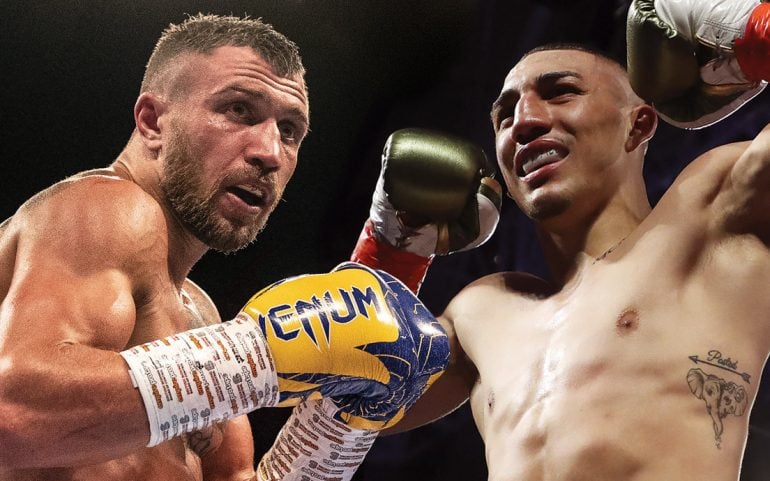 Lomachenko vs. Lopez is for the Ring Magazine lightweight championship.
15
Oct
by Joseph Santoliquito

The Ring received input from four venerable boxing figures—Hall of Fame announcer Steve Farhood, and esteemed trainers Stephen “Breadman” Edwards, Derrick James and Brian McIntyre—to get their views on how this fight could play out.

All four experts believe Lopez is a viable threat. All four believe Lopez is the bigger puncher. But they also believe that hitting Lomachenko is like hitting a knuckleball in baseball. He’s here, he’s there, he’s behind you and in front of you.

“Lomachenko has to show Lopez moves that Lopez has never seen before, and the way he does that is with the skills we’ve come to expect from him,” Farhood said. “Most of that comes from his incredible feet, movement and angles. To add to that, the other thing he needs to do is limit the number of exchanges, because punch-for-punch, there is not a doubt in my mind who hits harder, and it’s not Lomachenko.

“Stylistically, I don’t know if there is a fight I can recall that comes to mind, because Lomachenko is such a unique fighter. Outside of Manny Pacquiao in his prime, with his incredible speed and his southpaw stance changing angles, I don’t think there have been many fighters like Lomachenko. As a result of that, it’s easy to label him a boxer, but Lomachenko is so much more.”

When Roberto Duran and Ray Leonard met in the early 1980s for the first time, it was Duran who was stepping up to welterweight to fight Leonard. In that scenario, Leonard was the bigger man, and he was the boxer. Duran was new to the welterweight division.

“The style that gave Lomachenko his toughest fight was Jorge Linares, who is a pocket fighter, which Lopez is, and he caught him in round 6,” Farhood said. “I credit Lomachenko for being a great fighter, and in no way do I envision one punch ending the fight. Lopez is perhaps a better puncher than anyone Lomachenko has fought.

“If it’s a flash knockdown, he’ll get by it. If it sets him up for something more, Lopez could score a knockout.”

Edwards is an old-school connoisseur of the game. He’s been in all of the Philadelphia gyms and learned from some of the best in the business.

“If he can do that, he can clip Loma. Lopez is the more powerful fighter, but it will come down to his ability to land the power. This is a tougher fight than people think for Lomachenko. Every fight is different, and where a fighter is mentally and physically is different. He got up from the Linares knockdown. I do think Lomachenko has to watch out, because this kid is explosive. I actually think this fight is 51-49 in favor or Lomachenko.”

James works with one of the best in boxing, Errol Spence Jr. He’s seen both fighters.

“Orlando Salido showed how to beat Lomachenko and make him uncomfortable; how to not give Lomachenko what he wanted and everyone overlooks that,” James said. “A lot of fighters in the world, if it’s not going their way, they cannot get with it. I’m not saying Lomachenko is one of those guys, but we’ve never seen things not go Lomachenko’s way, other than the time he fought Salido.

“It’s like (Sergey) Kovalev. He’s a killer, until you put pressure on him. Let’s see if Lomachenko stay himself. Lomachenko has to show Lopez who he really is, and show Teofimo that he’s not supposed to be in the same ring with him. Teofimo has to focus on the end result; he has to remove the emotion from it.

“Lopez can smother you, and if he gets Lomachenko hurt, he may not let him get out of it. Lopez has amazing timing. If he’s able to use that, he could knock him out, but Lomachenko is so elusive, so intelligent, he’s tough to hit. It will be fun to watch.”

McIntyre, Terence Crawford’s trainer, once had a Lomachenko sparring partner over to face “Bud.”

“I think it’s a 50-50 fight,” McIntyre said. “You have to have the boxing IQ of a Terence Crawford to beat Lomachenko. I remember one of his partners came in to fight Terence once, and he had that Lomachenko style, sidestep, sidestep, punch, punch, punch. Terence tore him apart by fighting him southpaw and jabbed a lot to his chest.

“It’s hard to do. If you don’t have that boxing IQ, you will get picked apart. Lomachenko needs a sturdy chin, because Lopez has good timing. I can see Lomachenko getting dropped early, and then adjust to Teofimo’s style and speed and come away with a split-decision. But if Lopez hits him like Linares did, I can see him knocking (Lomachenko) out.

“The key will be keeping Lomachenko in front of him.”