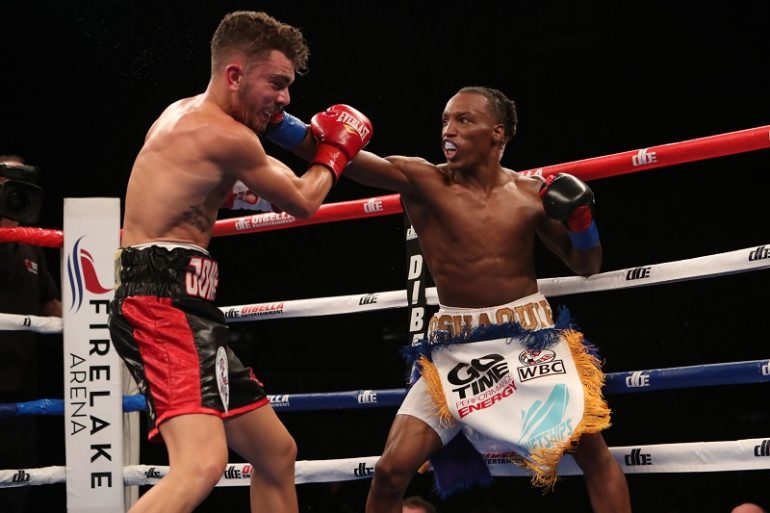 Junior lightweight contenders O’Shaquie Foster and Miguel Roman will square off on November 19, it was announced Wednesday afternoon.

The 10-round bout will take place at the Wild Card Boxing Club in Hollywood, California and will air live on NBCSN.

The fight will also coincide with the debut of “Ring City USA”, a new boxing broadcast and content platform. The November 19 show will be the first of several telecasts of live boxing on NBCSN that will take place on Thursdays throughout 2021.

“We are excited to bring boxing back to NBC Sports,” said Frank Samuel, CEO of Ring City USA. “This partnership will deliver exciting, highly competitive fights and become a day-in, day-out source of top-notch, unbiased content for fight fans around the world.”

The Wild Card Boxing Club, which is owned by Hall of Fame trainer Freddie Roach, seemed like a logical location for Ring City USA to stage fights. But the location will be closed to the public due to the COVID-19 pandemic.

“Wild Card is the heart and soul of West Coast boxing,” said Head of Boxing Evan Rutkowski. “Some of the sport’s greatest talent trained and developed there under Freddie’s guidance. As a developmental platform, we couldn’t think of a more perfect place for us to launch Ring City.”

Foster (17-2, 10 KOs), who resides in Houston, Texas, defeated Puerto Rico’s Alberto Mercado by unanimous decision in his last bout on December 5. He has won his last seven bouts, including a victory over the highly touted prospect Jon Fernandez of Spain.

The 27-year-old believes he is amongst the best at 130 pounds and hopes to face any of the world titleholders should he convincingly defeat Roman.

“I am so excited to return to the ring and show everyone that I’m the best at 130,” said Foster, who was an alternate for the U.S. Olympic team and is promoted by DiBella Entertainment. “I’ve sparred with the top guys in this weight class and put in a lot of work over the last year. I’m excited to showcase my talent as the main event on a new series.”

Despite suffering a loss to then-world titleholder Takashi Miura in January 2017, Roman believes that he can take advantage of a second opportunity and is convinced that Foster will not stand in his way.

“I’m very excited to be back in the ring and guarantee it will be a war that I won’t lose,” said Roman, who is promoted by Promociones del Pueblo. “There’s no way to beat me when I’m hungrier than ever and training like never before.”

In the co-feature, unbeaten lightweight William Zepeda will face Roberto Ramirez in a 10-round bout.

Zepeda (21-0, 19 KOs), a southpaw who resides in San Mateo Atenco, Mexico, battered Colombia’s Brayam Rico before stopping him in Round 6 of his last bout on March 7. The 24-year-old, who is promoted by Golden Boy Promotions, has knocked out his last 11 opponents.

Ramirez (23-2-1, 16 KOs) last fought on November 22, defeating Fernando Hernandez by unanimous decision in his hometown of Tijuana, Mexico. His most notable win took place in June 2018, when he knocked out former WBC lightweight titleholder Dejan Zlaticanin in two rounds. The 27-year-old, who is promoted by Paco Damian, has won 11 fights since suffering a knockout loss to Abel Ramos in June 2015.