Vasiliy Lomachenko and Teofimo Lopez meet in their final presser 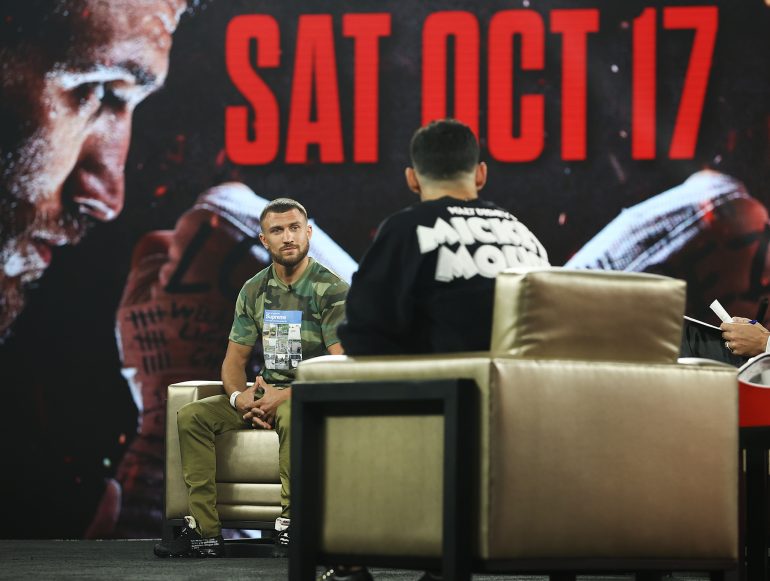 Vasiliy Lomachenko sat there with an intense low-brow beam, while his counterpart, Teofimo Lopez Jr., seemed far more relaxed, almost distracted, when the two sat across from each other in their final presser in an empty studio in the MGM Grand in Las Vegas. Moderated by ESPN’s Joe Tessitore, the pair discussed a variety of topics in the very place where they will fight Saturday night.

Lomachenko (14-1, 10 knockouts) is the WBC Franchise/Ring Magazine/WBA and WBO lightweight titleholder. Lopez (15-0, 12 KOs) is the IBF 135-pound titlist. Neither appeared like they wanted to be there, but Lopez was having more fun. Lopez smiled and embraced parts of the forced dialogue, while Lomachenko looked like he was constipated.

If Lopez wins, he’ll be the youngest four-title holder at 23. Lomachenko said winning four belts as always been a dream of his.

“That’s where the takeover comes in, it’s not just a phrase that I’m throwing out there, this is the part where I’m leading the new generation and doing everything to demonstrate that Saturday night,” Lopez said.

There was an interesting point broached during the meeting. Lomachenko will be going a year and 48 days between fights, the longest layoff of his career.

“I’ll check on Saturday (how I feel),” Lomachenko said.

Lopez even gave Lomachenko a break by saying, “For both of us, it’s the same thing. We haven’t had this much of a layoff. I’m a big 135-pounder, and (looking at Lomachenko, said), I always stay in shape.”

Another interesting point is Lopez plays to a crowd. This fight will take place in an empty conference room in Las Vegas.

When asked about the vitriol prior to the fight, Lomachenko said “it was just words.” But Lopez said they’ll touch gloves before the fight.

There was another point made by CompuBox’s Dan Canobbio‏, that Lomachenko has been getting hit more in the four fights he’s had at 135 than the previous weight classes he’s previously fought.

“At 135, they have a different reach and a different size, and that’s why there are different landed punches,” Lomachenko said.

The one poignant moment came when Lopez was shown a video of his remarks about his father and trainer, Teofimo Lopez Sr.

“My father, I love him to death, don’t get me wrong. This boxing world, you have to make a lot of sacrifices, that’s for sure. I’m hurt. I’m hurt by the relationship that we have. We make the most of it. I wish my father could be my father sometimes than just always my coach.”

A visibly upset Teofimo Sr. adjusted his face mask and you could see that it struck an emotional chord with him.

“I wouldn’t be here if it wasn’t for the person who pushed me,” Lopez Jr. said in reference to his father. “They want to break me down and they just can’t.”

When asked about what kind of fight he expects, Lomachenko said he expects the fight to be a chess match.

Lopez was noncommittal in what to expect.

“He knows, it’s going to be a fight,” said Lopez Jr. looking straight at Lomachenko. “He has the ring IQ, and I think he sees the ring IQ in me.”