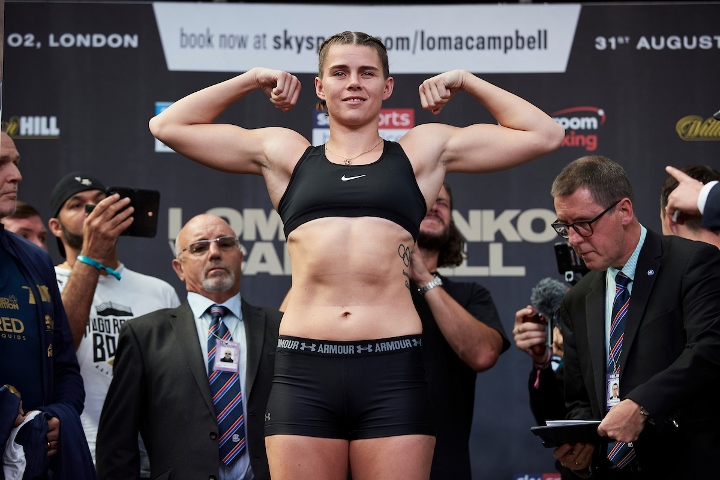 The fight was set for the Matchroom Boxing card headlined by Lewis Ritson vs. Miguel Vazquez this Saturday at East of England Arena in Peterborough, Cambridgeshire, United Kingdom.

A press release stated “the fight will be rescheduled in due course.”

“It’s very regrettable that’s it tested positive for Covid-19,” tweeted Fury, the uncle of Ring heavyweight champion Tyson Fury. Peter Fury added that Marshall (8-0, 6 knockouts) has tested negative, but that the team will have to quarantine for 14 days.

Marshall of Hartlepool, England, who is the only fighter to ever defeat Claressa Shields in the amateurs, was gunning for her first world title as a professional.

Rankin (9-4, 2 knockouts) of Glasgow, Scotland was to be Marshall’s most experienced opponent as a pro, having traded punches with Shields and Alicia Napoleon.

“Absolutely gutted, as many of you have heard now my @worldboxingorg World Title Fight is off due to @peterfury testing positive for Covid in the bubble,” wrote Rankin on social media. Rankin called on Marshall to keep her weight down so the fight can be rescheduled. “I want this fight, I win this fight!

“This is just a small delay, I will bring this belt home.”

The Ritson-Vazquez card will go on this Saturday, with the stream on DAZN beginning at 1:30 p.m. ET.