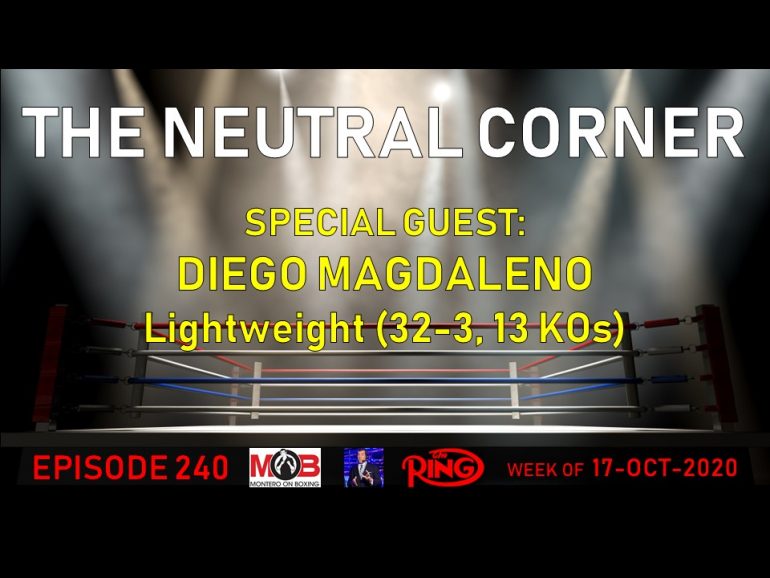 “I know he’s a younger fighter,” he told The Ring. “He’s going to come and try to take me out. For me, I have to go back to where I started, back to boxing.”

“This is my second fight with (trainer) Bones Adams. If you look at my last fight against Austin Dulay, I punished him. And that’s what I intend to do against Cruz. I’m handing out ass whoopings and serving snow cones afterwards.”

Not only is Magdaleno excited to get back in the ring for another potential title shot, he’s happy fans will be in attendance. It was recently announced that the Davis vs Santa Cruz card will take place at the Alamodome in San Antonio, Texas, with socially distanced fans permitted to attend.

“Of course having fans is better,” he said. “When you land a clean shot and you hear the fans screaming, it only motivates you that much more. I’ve listened to a lot of fighters say that when you get in the ring, fans or no fans, it doesn’t make a difference. But I feed off of energy. In the final round when you’re tired and looking for that Hail Mary punch to throw, it’s that crowd energy that keeps you going.”

Diego favors Leo Santa Cruz to pull off the upset against Gervonta Davis. When it comes to the big fight this weekend, he feels Lomachenko’s experience will carry him through. Should he defeat Cruz later this month, Magdaleno will be in line to face the Loma-Lopez winner. And although he would love to avenge his loss to Lopez last February, Diego says he would prefer to face Loma next.

“If you go with ego, I’m going after Lopez,” he said. But if you look at it from a business sense, I’d rather fight Lomachenko. It’s a bigger purse. And with his track record and what he’s done, he’s a bigger name.”

Conwell (13-0, 10 KOs), a recent TNC guest, remained perfect with a KO 9 win over Wendy Toussaint in a ShoBox main event, while Navarrete (32-1, 27 KOs) became a two-division titleholder with his unanimous decision victory over Ruben Villa on ESPN. Although the right man won, the scorecards were too narrow. Had Navarrete not scored two knockdowns in the early rounds, the bout would have ended in a majority draw.

In the preview, Montero gave a detailed analysis of the entire Lomachenko vs Lopez card scheduled for this Saturday, October 17. The Ukrainian boxing sage will go up against the undefeated American in the most anticipated match up of 2020. Best of all, the fight will be on regular ESPN in the U.S., rather than the ever-dreaded PPV.

One caller heavily favors Lomachenko Saturday night and dismissed Teofimo Lopez as the greatest challenge in his career. “It’s not going to be Lomachenko’s best win, I’ll tell ya that,” he said. “It’ll be just a notch over his win against Nicholas Walters.”