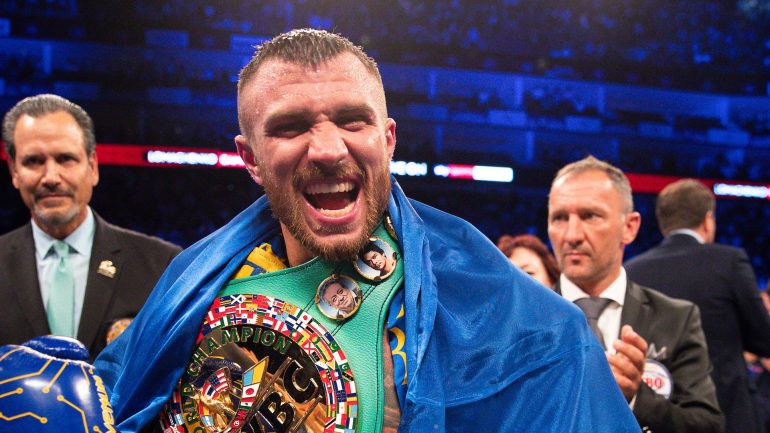 On Monday, WBC President Mauricio Sulaiman spoke to select members of the media and declared that the winner of the lightweight title megafight between Ring Magazine, WBA and WBO lightweight champion Vasiliy Lomachenko (14-1, 10 knockouts) and IBF lightweight beltholder Teofimo Lopez (15-0, 12 KOs) will be the WBC Franchise champion.

The fight will take place this Saturday night, televised worldwide on ESPN from the MGM Grand in Las Vegas.

Sulaiman stated that he received a request from Teofimo Lopez Jr. and from Top Rank, the promoter of the fight, that the winner of the fight would be the WBC Franchise champion. Sulaiman also revealed that Lomachenko is the WBC champion and he petitioned for and was awarded the “Franchise” designation.

“Lomachenko is the WBC lightweight champion, with special attributes, without having to face mandatories that a champion has to face,” Sulaiman said. “The franchise (designation) is to allow the big fight that the fans want to see.”

Sulaiman also addressed the confusion boxing fans have in following the championship structure of boxing, with so many splintered champions in the various sanctioning bodies. Who would be the champion, Lomachenko or Haney?

“With the franchise, this fight is happening in the lightweight division,” Sulaiman said. “We’ve created one concept that’s very limited, which allows things to happen. I perfectly understand (the confusion). If we were an operation like the UFC, in which they are the network, they’re the promoter, they’re the manager, they’re the organization. It’s a unique world that everything happens within the UFC. Boxing is not like that. We must operate with what we are.

“Lomachenko is a unique case. Canelo Alvarez is a unique case. We’ll have to leave it at that. I understand that there will be criticism, or concerns, or resistance. I just ask that there is a little opened minded(ness) and the possibility to see this grow into something that could pave the way for great fights. It’s a fact. We want the best for boxing.”

Sulaiman stressed that he would like to see one champion in each division. But with unifications and mandatories, it gets complicated and power struggles become involved.

“If there is one champion, that would be great for fans, but boxing is not like the NFL, or the NBA, NHL, or UFC, unfortunately,” Sulaiman said. “I believe that Teofimo has such an interest in the WBC and has great expectations to be a superstar. Teofimo was in line to fight for the WBC title a couple of years ago, and he pursued another opportunity. When you see the elements of a Roberto Duran in the making, we accepted their request and it’s very valid. If he defeats Lomachenko, then he’s in a special place all his own.

“That was the reasoning. It’s creates a good precedent, because he’s fighting in the weight category.”

Some other points that were broached included:

*The spotty judging in the bubble during the COVID-19 pandemic and making the move to five judges for WBC championship fights. When asked when that will begin, Sulaiman said that will depend on the jurisdiction where the fight takes place. “What I have seen during the remote scoring during this era of the pandemic, I am so convinced that the more judges that score a fight, the less opportunity for a controversy,” he said. “So, if you have five, seven, eight judges scoring a fight, the possibility of a bad decision goes to a minimum. I am convinced there are so many things to still do regarding officiating. It will always be controversial, because what you see is different from what the other one sees. We are in the process of having five judges in a few fights in the jurisdictions that will allow this to happen. We have done fights where official judges go inside combined with remote judges. I don’t know how easy or fast that this can be implemented. By 2021, we’ll have five judges for sure.”

*WBC heavyweight titlist Tyson Fury declared to The Athletic that, “I was looking forward to smashing (Deontay) Wilder again. A quick and easy fight. But Wilder and his team were messing around with the date. They don’t really want to fight the lineal heavyweight champion. They know how it ends. The world knows how it will end: with Wilder on his ass again. Then they asked me if I would agree to push it to December. I agreed to Dec. 19,” Fury said. “Then they tried to change the date again into next year. I’ve been training. I’m ready. When they tried moving off Dec. 19 and pushing to next year, enough was enough. I’ve moved on.”

“Usually, we do not go by news that is not confirmed, or not directed in one way,” Sulaiman said. “The WBC has not received any formal communication whatsoever. What we know as of right now is that the fight is on for December 19. We have not received a sanction request. It is only informal communication with both sides. Over the weekend, I started receiving many calls, especially from UK media stating that the fight was not happening or was called off. We have not heard anything official. We’re reaching out to both camps to see where the fight stands right now.”

Sulaiman did say that the third fight is scheduled. When asked on the WBC’s official position if the fight couldn’t be made for Dec. 19, Sulaiman said the main thing was a contractual agreement. Sulaiman said Fury would not be stripped of the WBC title if he does not fight Wilder next—and that there is no mandatory in the heavyweight division right now.